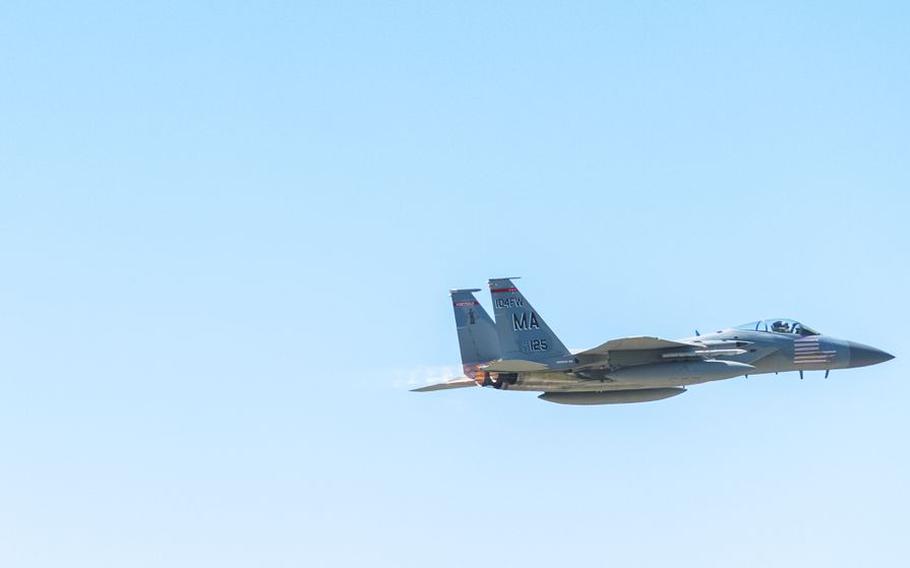 The F-15C Eagle Aircraft flyover at the ceremonial groundbreaking of a new Taxiway Sierra at Westfield-Barnes Regional Airport on Thursday, May 27, 2021. (Leon Nguyen, The Republican/TNS)

WESTFIELD, Mass. (Tribune News Service) — The Pentagon is expected to announce by year’s end whether Barnes Air National Guard Base and its 104th Fighter Wing will get an upgraded version of the F-15 fighter jets it flies now or, preferably, the latest F-35 Lightning II aircraft.

They’re also the future. Getting the latest F-35s would secure Barnes’ place in the Air Force’s plans for decades, ensuring a steady stream of federal money and insulating it from any future round of base closings. 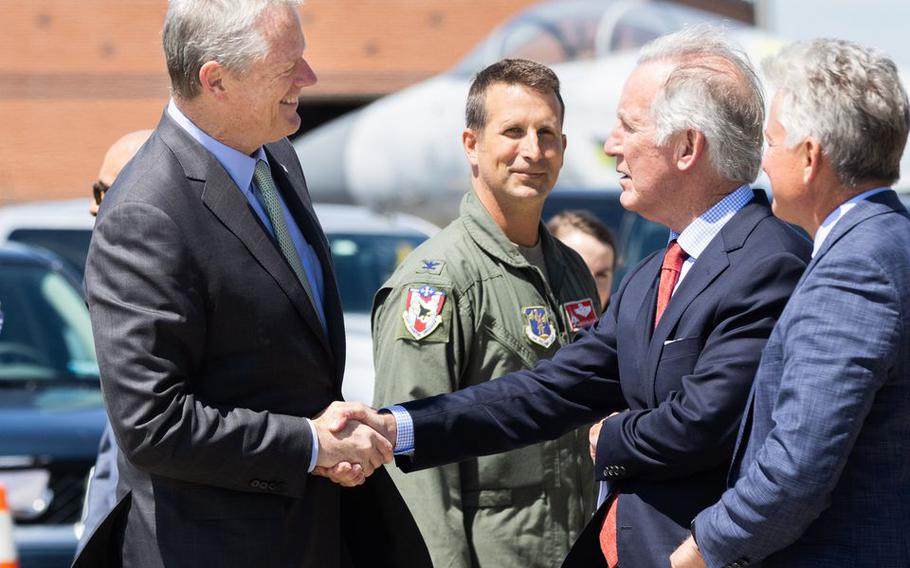 The presence of fighter jets in Westfield unlocks other funding, including for an air traffic control tower that’s staffed during the day, something it would be hard for Westfield to provide on its own, Mayor Donald Humason said. That tower helped convince Gulfstream to build a maintenance facility for corporate jets at Barnes.

Any announcement might come more than 14 months after the Air Force said it will replace the Air National Guard’s remaining F-15C/D fighter jets — at Barnes, Fresno Yosemite Airport in California and Naval Air Station Joint Reserve Base New Orleans — with either F-15EXs or F-35As. Naval Air Station Lemoore in California is also being considered for F-35As.

Spokespeople for the Massachusetts National Guard were asked for updates and said only that the decision-making is ongoing.

U.S. Rep. Richard E. Neal, D-Springfield, has said he continues to advocate on behalf of Barnes. His office said that there is continued regular contact between Neal, chairman of the powerful House Committee on Ways and Means, and Air Force secretary Frank Kendall III.

Gov. Charlie Baker has met with top Air Force officials in Washington and expressed optimism on a visit to Barnes in May.

That includes the SPEED Act, a proposed state law formally known as an “Act relative to military spouse-licensure portability, education and enrollment of dependents.” Provisions include making it quicker for relocating military spouses to get professional licenses and easing enrollment in new school districts for military kids.

The state Senate passed the bill in October. It must still be approved by the House and signed into law by Baker.

State Sen. John Velis, D-Westfield, said the Pentagon looks for the accommodations in the bill to be in place before allocating assets like the F-35. Velis serves in the U.S. Army Reserve.

Willenborg said a long-talked-about new security gate is needed no matter what new plane Westfield gets. The $4.5 million gate would resemble the one the Connecticut Air National Guard has at its facility at Bradley International Airport in Windsor Locks, the Air Force has said. Westfield’s would relocate the base entrance from Falcon Drive to Routes 10 and 202.

“I know they are in the design phase right now,” Willenborg said.

Matthew Mogavero, spokesman for MassDevelopment, said construction will begin in the spring of 2022.

MassDevelopment, the state’s development finance agency, administers the 2015 Military Bond Bill authorization, which will fund the gate. It has already funded a $4.7 million taxiway improvement, expected to be complete later this year. The bond also funded a $9 million runway resurfacing effort in 2014, and almost $1 million in energy efficiency improvements in 2015.

This year’s Taxiway Sierra project created new parking space big enough for three Boeing 737s, making it easier and safer for aircraft to move around on the ground. This will help Gulfstream and gives the military a place to park more aircraft.

No one in Westfield, at least thus far, is speaking out publicly about noise from the F-35. But in Burlington and Winooski, Vt., citizens complain at city council meetings that the noise is so intense it creates health problems.

The Vermont National Guard’s 158th Fighter Wing got its first F-35s in September 2019. It now has 20 of them. The unit there blames some of the complaints on the approach patterns it uses over Lake Champlain as part of its noise mitigation plan.