Former Army spouse Angie Perry said she experienced years of chronic pain after a laparotomy pad was left inside of her after a cesarean section at Yokota Air Base, Japan, in 2013. (Angie Perry)

YOKOTA AIR BASE, Japan – Eight years after a surgeon at this base in western Tokyo left a laparotomy towel inside Angie Perry’s abdomen, the Air Force has offered to settle her medical malpractice claim for $50,000.

Perry, a former Army spouse now living in Vancouver, Wash., discovered the towel and had it removed five years after her cesarean section at Yokota in 2013, according to Perry and records she provided. She is seeking $1 million in compensation.

“There is no doubt in my mind if that towel wasn’t found, it would’ve killed me,” she told Stars and Stripes on Sept. 15. “I’d rather not take anything than settle.”

Mistakes of this type are not uncommon in Defense Department hospitals, although they have declined since 2016, when DOD began tracking them in its annual Tricare program report.

In 2020, DOD hospitals reported 17 instances of a foreign object being left inside a patient after surgery, according to the annual DOD report on its Tricare health-care program. The report identified another 21 cases of the wrong patient, the wrong procedure or the wrong body part.

Until recently, patients at the receiving end of a military surgeon’s mistake had little recourse to compensation.

A provision in the 2020 National Defense Authorization Act, which sets policy and spending priorities for the Pentagon, ended the 70-year ban on suing the DOD for medical malpractice. In December 2019 then-President Donald Trump signed the Richard Stayskal Military Medical Accountability Act into law, allowing active-duty members to file medical malpractice claims against the DOD.

However, the new law has a two-year statute of limitations, and does not allow service members and their families to sue medical facilities at bases overseas, although they may file claims.

“Overseas patients may bring administrative claims for malpractice against the DoD under the Military Claims Act,” a Pentagon spokesperson, Maj. Charlie Dietz, told Stars and Stripes via email Oct. 5. “Congress would need to change the law for patients to bring lawsuits.”

Perry remembered her surgery at Yokota as chaotic. The surgeon assigned to her was fresh out of training, according to the resume of the physician, who no longer works at the base.

“At one point, the surgeon couldn’t stop the bleeding and things got a little frantic in the surgery room where the nurses were pleading with the surgeon to let them go ask another surgeon to come and assist,” Perry said. “I thought for certain I was going to die right there.”

Nonetheless, Perry went home with her new, healthy baby. But she said she suffered a series of chronic health problems until a CT scan in 2018 discovered the metal tag on the towel left in her abdomen five years prior.

For three years Perry said she experienced pain that interfered with her bonding with her child. She felt as though her digestive system had shut down, and because her bladder no longer functioned properly, she wore diapers.

Despite 27 doctors’ appointments while living in Japan, Perry said she never found the cause for her agony.

“I was getting into fights with my husband because he was so angry and believed I turned into a hypochondriac,” she said. “He didn’t understand why I was addicted to going to the doctor … I had never experienced pain like this before.” 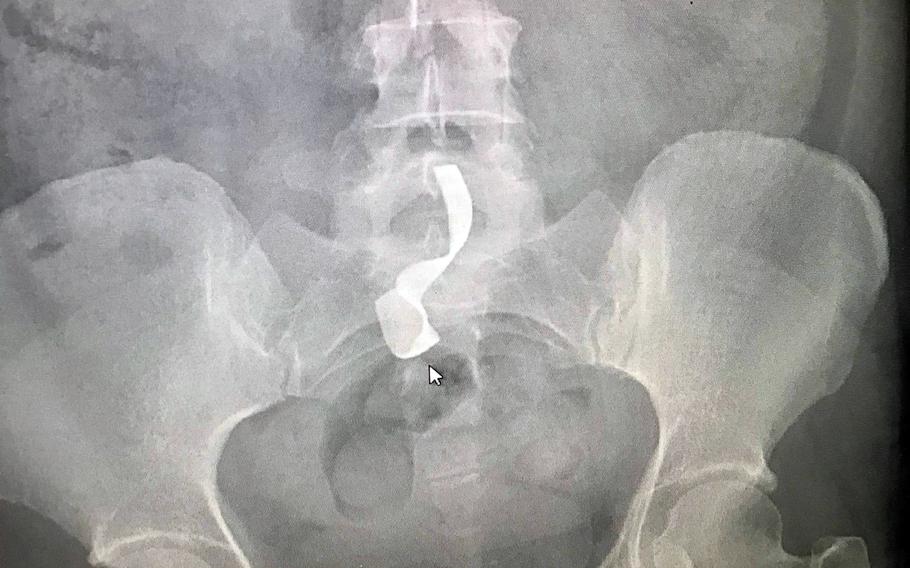 A CT scan from a doctor in Washington state found a laporotomy towel, idetifiable from its metal tag, had been left inside Angie Perry from a cesarean section performed at Yokota Air Base, Japan, in 2013. (Angie Perry)

Five years, six gastrointestinal specialists and several emergency room visits later, a doctor in Washington state did a scan of Perry’s abdomen and found the laparotomy towel. It was removed on Oct. 31, 2018, along with a part of her small intestine, Perry said.

In July, the Air Force offered to settle Perry’s claim for $50,000, according to a letter from the medical law branch of the judge advocate general’s office at Joint Base Andrews, Md.

“We do recognize that a laparotomy pad was discovered to have been retained in the abdomen, which may have caused some pain,” the letter states. “Although abdominal pain is a symptom of a retained laparotomy pad, pain is subjective and by Oct. 22, 2013, Ms. Perry had no abdominal pain.”

Perry hired a medical malpractice attorney in Texas in April 2019 to file a claim against Yokota. She said she does not intend to accept the settlement offer from Yokota and is now seeking different representation.

“My bladder still doesn’t work, there’s a lot of scar tissue, it caused a huge wedge between my husband and me,” she told Stars and Stripes on Tuesday. “The stress of knowing every single day that something was wrong with me, but I couldn’t get a doctor to listen to me. It took away the first five years where I should have been enjoying the new baby, but I was so weak that my health consumed every waking moment. I believe, after everything I have been through, it is what I deserve.”

A spokesperson from Yokota Air Base said the 374th Medical Group and the base’s legal department cannot speak about Perry’s case.

“We cannot provide the details on an individual’s specific case in the interest of protecting personal privacy or avoiding impact to a potential ongoing investigation,” Tech Sgt. Taylor Workman told Stars and Stripes via email Sept. 21.

Perry’s wasn’t the only case of her kind at Yokota.

Lamia Lahlou, a former Arabic linguist for the Army, had a similar experience. After her C-section from the same surgeon as Perry at Yokota in September 2013, she started experiencing chronic abdominal pain and digestive issues. She said her doctors told her it was part of the recovery process.

“I was in so much pain that I thought maybe they put my organs in wrong,” she told Stars and Stripes in a phone interview Sept. 20.

Lahlou said she was told by Yokota doctors her pain was psychological and was referred to the mental health clinic.

“I felt like I was being told I was crazy,” she said. “But I thought that maybe they were right. I believed that doctors knew better.”

In the U.S. for Thanksgiving that year, Lahlou called a doctor because, she said, she could no longer stand the pain.

A CT scan revealed a mass of infection along with cotton balls left inside Lahlou’s abdomen from the C-section. Doctors also found a 21-cm abscess and leftover materials.

She had five surgeries and part of her bladder removed. She decided to stay in the U.S. rather than return with her husband to Japan.

“This story for me is very personal, because what was meant to be the arrival of my second baby resulted in so much pain and suffering and, at the end, my divorce,” she said.

Lahlou started the process of filing a claim against the Yokota medical group in 2014 but could not find an attorney to take her case, she said. She ultimately dropped her claim.

Lahlou said she encourages anyone who experiences a similar situation to persist in finding answers.

“If I didn’t fly back to the U.S. and kept being seen at Yokota, what could have resulted?” Lahlou said. “I could have easily died, and what would my parents have gotten? An ‘Oops, sorry?’ If you are in pain, keep seeking answers. We know our own bodies.”