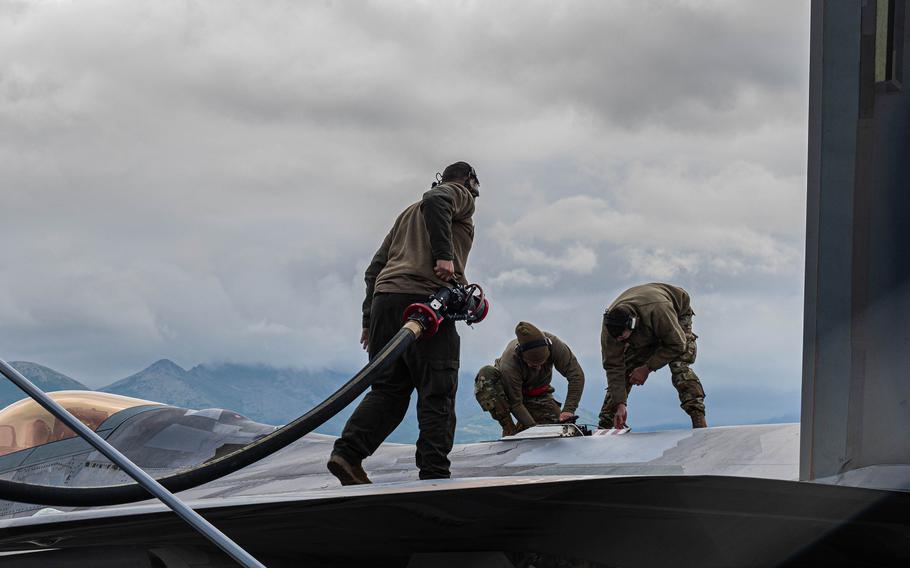 “We learned in Vietnam that the most losses came in the first eight to 10 sorties, and so this is a way to give young pilots those eight to 10,” he said. “I had 17 pilots out of 155 people, probably hundreds more with the tankers and support on the way and back and all the planning — think of all that to make sure pilots get those eight to 10 and are safer.”

The 94th’s pilots who went to Alaska — one with just 40 hours in an F-22 — are mostly used to flying over the ocean when they take to air from Langley. Alaska is a lot different.

”You’ve got to be aware of that. You’ve got to know that an adversary might be hiding in a valley. If we need to divert here, we’re minutes from the Newport News airport or Oceana. Up there, our nearest divert was 250 miles away.”

A key part of the exercise for Langley’s F-22 pilots was flying with other planes and learning their different capabilities — and the potential threats that so-called “fifth generation” fighters might post. F-16s from the 18th Aggressor Squadron at Eielson Air Force Base acted as adversaries in the exercise.

Pilots from the Royal Australian Air Force flying with the Langley team were in F-35s, the newest fighter jet the American military and a handful of allies fly, as well as F-18s and the Australians’ E-7 Wedgetail airborne early warning and control planes. That was a big deal for 1st Lt. Bentley Barker of the 94th — he’s a native of Australia.

“Being able to integrate with coalition partners like the RAAF is something we don’t often get to do,” he said

“For a lot of my pilots, this is the first time they have been able to do fighter integration with other aircraft,” Kuntz said.

They flew a wide range of air-to-air and surface-to-air scenarios, with more than 100 sorites and more than 250 hours of flight time.

Langley sent eight of its F-22s to Alaska for this year’s Red Flag Alaska exercise. But they came with some 120 tons of equipment — spare parts and tools for repairs and maintenance — and figuring out what they needed and how to move it from Virginia, as well as how the planes would refuel on the way, was a two-month effort for 1st Lieutenant Evan Reiss, alternate installation deployment officer, and his team.

Reiss staged the spare parts, tools and other equipment in three lots, flown by Air Force C-17s — the giant military transports that can lift 72 tons of cargo — sending in one load ahead of the F-22s, so that the basics to handle repairs the planes might need were there immediately on arriving in Alaska.

He was planning on bringing the gear back on a 747, but that plane ran into problems, and he had to scramble to arrange for trucks to bring the Langley cargo down the Alaska Highway through Canada.

“Sometimes, you just have to cope,” he said.

Airmen from Langley’s 633d Logistics Readiness Squadron joined the pilots and maintenance teams. The squadron had handled the packing and paperwork for the 120 tons of equipment Langley sent to Alaska, as well as the portion it retrieved, and the airmen who went to Alaska were responsible for finding spare parts or other supplies the pilots and planes needed during the exercise.

“This is a chance to work with real assets in a real situation, just like we were deploying,” said Maj. Heather Higley, the 633rd’s commander.

“It’s really a chance to exercise those muscles.”