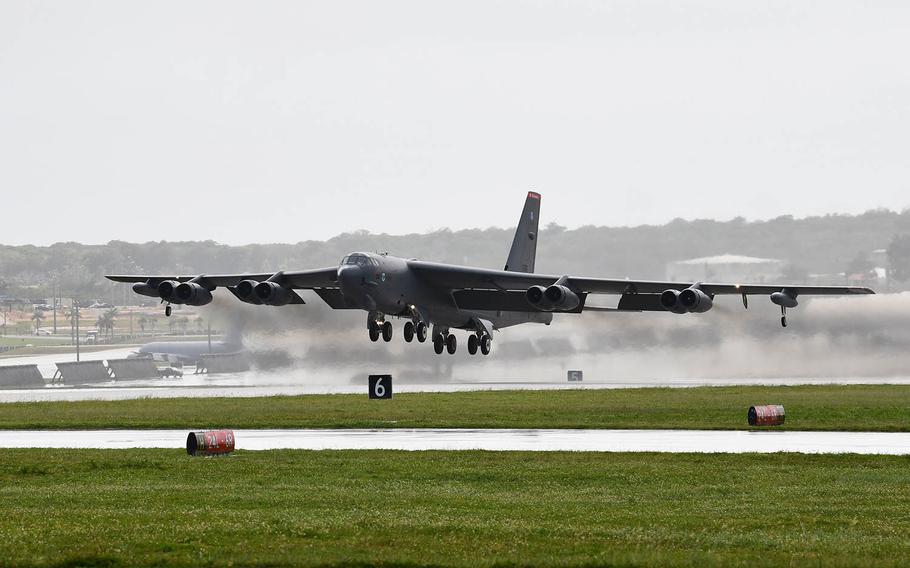 A B-52H Stratofortress bomber lifts off from Andersen Air Force Base, Guam, to support the Northern Edge exercise in Alaska, May 7, 2021. (Louis Vega Jr./U.S.Air Force)

Air Force B-52 Stratofortress bombers have been front and center during the ongoing Northern Edge exercise in Alaska, first testing target data for an experimental hypersonic missile and then working with fighter jets.

On May 5, a B-52 flew a 13-hour roundtrip sortie to Alaska from Barksdale Air Force Base, La., to test data transmission and target sensing for the AGM-183 Air-Launched Rapid Response Weapon, a hypersonic missile being developed by Lockheed Martin for the Air Force, the service said in a news release Thursday.

A prototype of the hypersonic missile traveled up to eight times the speed of sound with a range of 1,000 miles, according to a report last month by the Congressional Research Service.

For last week’s test — during which no projectiles were actually fired — the B-52 received data from a command-and-control team gathered at Joint Base Elmendorf-Richardson.

The team, part of the exercise’s All-Domain Operation Capability Experiment, is synchronizing joint functions in forward locations during the two weeks of training that ends Friday, the Air Force said.

In this experiment, sensors operated by the command-and-control team sent target data to the B-52, which was more than 1,000 miles away.

The bomber then made a successful simulated hit of the target from 600 nautical miles away using a hypersonic missile.

The bomber crew confirmed the hit to other aircraft in the air, which closed the so-called “kill chain” for a successful missile strike.

“This was a test of the datalink that makes hypersonic-weapon targeting possible,” said 1st Lt. Savanah Bray, an Air Force spokeswoman.

“As hypersonic missile testing continues to go through the steps that it takes to eventually field this weapon, this is a major milestone in the data-forming process,” she said.

The experiment was one step in developing tactics that will be used by, for example, a pilot in the bomber’s cockpit to accurately fire the weapon once it becomes operational, Bray said.

Meanwhile, on Friday a B-52 flew from Andersen Air Force Base, Guam, to the vast Joint Pacific Alaska Range Complex, where it joined up with U.S. fighter jets during a Northern Edge Bomber Task Force mission.

The objective was to establish tactics and procedures in working with Navy and Marine Corps personnel, the Air Force said in a news release Monday.

“We have to get reps as a team,” Lt. Col. Jarred Prier, commander of the 20th Bomb Squadron and the bomber task force, said in the news release.

“It’s like basketball — sure I can practice free throws by myself, but there’s nothing like running drills with the rest of the team,” he said. “That is what we’re doing with Northern Edge.”

The long-range B-52s can carry both nuclear and conventional bombs and can fly more than 8,800 miles without refueling.