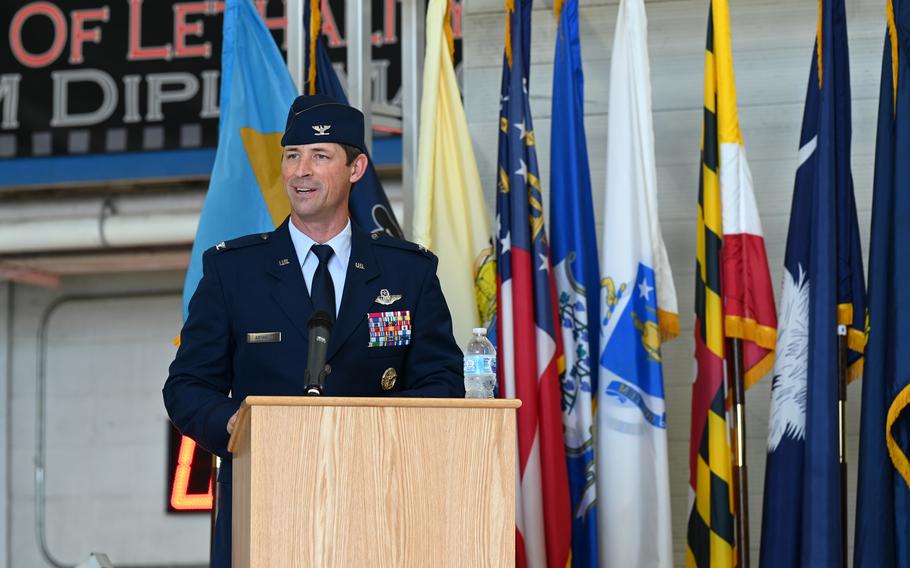 Arthaud was born and raised in Hoquiam, attending Lincoln Elementary and Hoquiam Middle schools. He played football, basketball and baseball for four years at Hoquiam High School and graduated in 1995.

"He was my fourth-grade teacher at Lincoln," said Arthaud.

"She was born in Enid, Oklahoma, which ended up being kind of funny," said Arthaud. "She moved from Enid at the age of 2 and I'm not sure if she'd ever been back to Enid, but when we got married my first duty assignment was to Vance Air Force Base in Enid."

The couple has four boys, the oldest a sophomore in high school. With his dad's career and constant moves, Arthaud said he's been in eight different schools.

Wills praised the 33rd for its continued contributions to the Air Force's newest 5th-generation fighter, the F-35A Lightning II and congratulated Arthaud for being chosen to continue the wing's almost 80-year legacy in airpower.

"We celebrate the fact that the Air Force sent us another great leader and another great family to continue this wing's great legacy," said Wills.

Arthaud came to the 33rd from his previous position as the United States Air Force Weapons School commandant at Nellis Air Force Base in Nevada. Arthaud is a command pilot with more than 2,000 flight hours and has served in five fighter squadrons.

"It is truly an honor to return to the wing and do my part to uphold the lineage and tradition of excellence," said Arthaud at the change of command ceremony.

"We will continue to build the world's finest warriors and leaders, able to compete and win anywhere in the world," said Arthaud.

The Arthaud family has some history in the military.

"My grandfather on my father's side, whom I was named for, he served in the Army Air Corps," said Arthaud. "My father served a short period in the Navy, and my uncle was in the Army somewhere between two and four years and went to Vietnam."