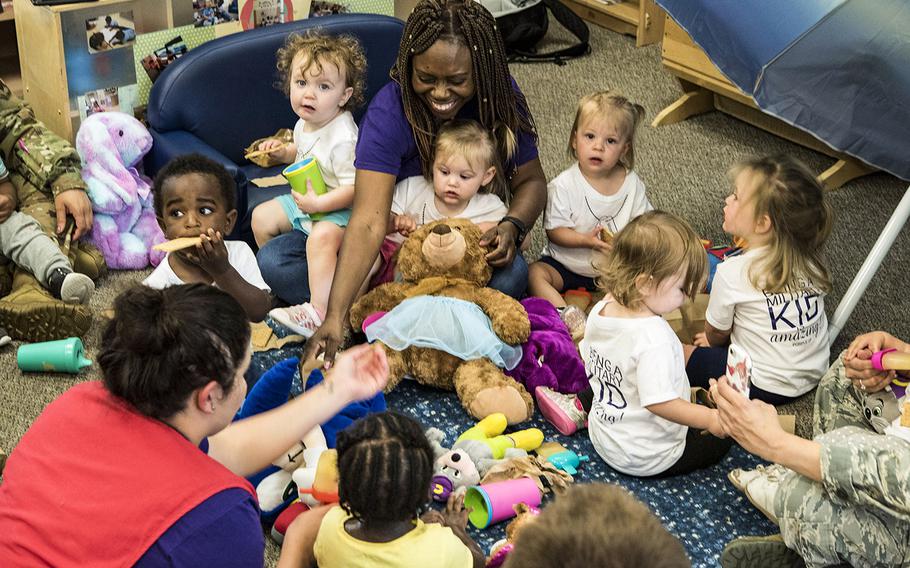 Children take part in the Teddy Bear Picnic, April 26, 2019, at Moody Air Force Base, Ga. The Air Force has requested $20 million in its fiscal 2022 proposed budget for only one child-care development center to be replaced at Sheppard Air Force Base in Wichita Falls, Texas, despite a Defense Department report last year identifying more than 70 service child-care facilities need upgrades. (Erick Requadt/U.S. Air Force)

However, an Air Force official said during a subpanel hearing of the House Armed Services Committee that the service has requested $20 million in its fiscal 2022 proposed budget for only one child-care development center to be replaced at Sheppard Air Force Base in Wichita Falls, Texas.

Child-care development centers typically provide care on military installations for infants up to preschool-age children. Jennifer Miller, acting assistant secretary of the Air Force for installations, environment and energy, said the service has 222 CDCs, school-age centers, and programs that provide care to children in kindergarten through sixth grade.

The military’s child-care issues reach further than the Air Force, however. All of the services have historically struggled to keep pace with much-needed repairs at their base facilities. At the same time, the services have also been unable to meet demand for a growing number of Defense Department personnel with families who need child care.

Rep. Jackie Speier, D-Calif., pressed Miller on why the service requested funding for just one CDC despite the high numbers of poor and failing facilities in the DOD report. She said she has heard “horror stories” of families waiting for child care for more than a year.

Miller said 5,100 families and 5,116 children have unmet child care needs, and the average wait time for a slot in a child-care facility is 151 days. But the decision to renovate only one child-development center was based on a new Air Force “building condition index,” she said.

The Defense Department in its report rated facilities as “good,” “fair,” “poor” or “failing,” though it did not describe what those categories represent. However, the Air Force scoring system used a color code to denote a facility’s condition and concluded service centers were in better condition than the DOD report.

“Only one on the building condition index was ‘poor’ or ‘red’ and that one has a $3.6 million renovation pending,” Miller said, citing the Air Force evaluation of its facilities. “For the other ones, we have ‘amber,’ which is still acceptable to use,” she said. It was unclear at which base the renovation is underway.

In the Air Force evaluation, facilities rated “red” require significant investment during the next couple of years. An Air Force document obtained by Federal News Network in March describes “green” is “good condition,” subject to minor repair or routine maintenance, “amber” is “acceptable condition,” or in need of system repair or replacement, and “red” is “poor condition” or in need of major rehabilitation or replacement.

Speier asked Miller to submit a list of all the properties that are considered red and amber on the Air Force condition index, and at which bases they are located, as well as what makes a facility “poor” or “failing.” The issue of child care must be a higher priority for the Air Force, she said, illustrated by the long wait times.

Miller acknowledged the Air Force has “not historically funded CDCs at the level that we ought to.” But she said 144 facilities are “amber,” which require some fixes, and 74 are “green,” which do not require attention, according to the Air Force report.

Miller also argued the Air Force building condition index assesses physical infrastructure requirements, and health or safety issues are resolved immediately. More so, the Air Force appointed a group in 2020 to come up with a list of projects that need the most urgent attention, she said.

Miller also said four CDCs are on the Air Force’s “unfunded priority list,” a wish list sent to Congress that details what the service would spend money on if it had more funds. Those projects are at Lackland Air Force Base and Fort Sam Houston at Joint Base San Antonio, Wright-Patterson Air Force Base in Ohio and Royal Air Force Lakenheath in England.

The House Appropriations Committee’s subpanel on defense approved a measure this week that included $24,000 in funding for the first two projects and $29,000 for the latter two, in addition to the $20 million requested for the replacement at Sheppard Air Force Base.