‘It’s a waiting game’: Pope Army Airfield airman from Grenada waits 13 years to come to US 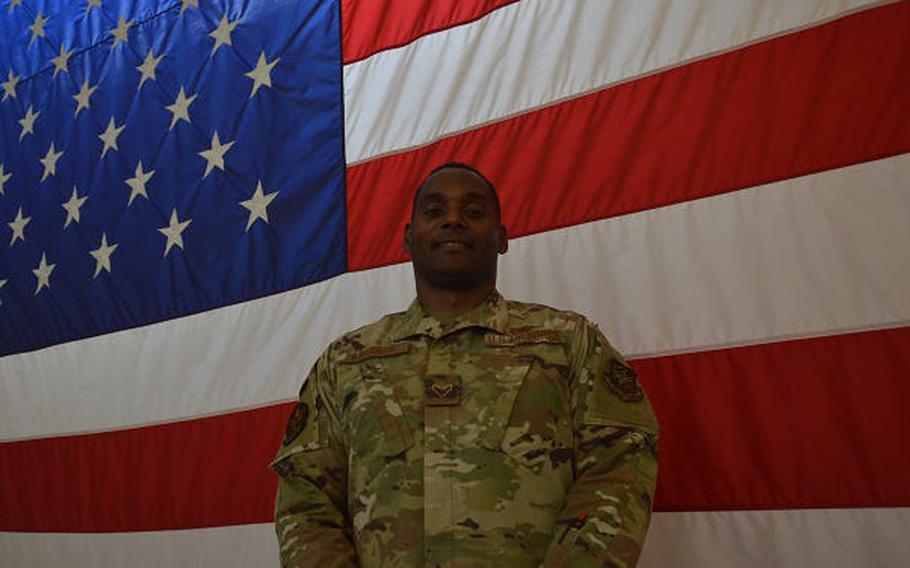 Airman 1st Class Mervale Abraham is originally from Grenada and is in the process of becoming an American citizen. (Christian Sharpe/U.S. Air Force)

FORT BRAGG — Airman 1st Class Mervale Abraham has multiple reasons for why he wants to be an American.

There’s also his 6-year-old son, who he wants to ensure has better opportunities.

Abraham, who is in his mid-30s, is originally from the Caribbean island of Grenada and moved to the U.S. when he was 33 years old, about two years ago.

“Definitely you’re afforded an opportunity by coming here,” he said. “You get a chance to more or less reach or attempt more than what you’re limited to in a smaller region or islands.”

The path to coming to America started with his brother, he said.

The process for Abraham and his sister to obtain their green cards was a 13-year wait to become a legal immigrant.

“Then when the opportunity came, even though it was 13 years, I just had to go with it,” he said. “I had to accept it for what it is and use it as the next chapter in my life.”

He left his job teaching math and geography at an all-boys school during those 13 years and arrived in the U.S. in June 2019.

He joined the Air Force in May of last year and is currently an air freight technician with the 43rd Air Mobility Squadron responsible for loading and offloading cargo and personnel from aircraft at Pope Army Airfield on Fort Bragg.

“When I sat down and even before I came here, I was of the mindset that I’m not just going to come here and get caught up in the lifestyle like the bling or hip-hop syndrome kind of stuff,” Abraham said of why he joined the Air Force. “And I was like, ‘What would give me a chance to achieve equally as someone who was probably born here or someone who came here at a young age?’”

Abraham said his job with the Air Force is one of the reasons why he decided he wanted to become an American citizen.

“If you want to go further in this occupation or you want to do everything that the occupation entails, then you have to have all those requirements checked,” he said.

In December, he submitted his application.

“You submit those forms and it’s a waiting game,” Abraham said. “They will then update the process as times go on and they need anything from you.”

Abraham has completed the interview portion of his citizenship test and is awaiting official approval to become an American.

He said the interview seemed like a similar experience to when he enlisted in the Air Force.

“The way I felt then when I went into the service, I’m sure I’ll pretty much feel the same way — knowing that I’m representing something that is bigger than myself,” he said of becoming an American.

His immediate family — his sister and brother, who is in the Army — has been supportive, he said.

“My son doesn’t understand the process, but he’s a big part of the reason why I’m doing this, as well, because I want to give him a chance at a young age and not have to wait 13 years.”

Abraham said he’s been able to maintain communication with friends and family back in Grenada.

He thinks he’s able to maintain his culture when he visits family in New York or Florida.

“North Carolina right now doesn’t really have a strong cultural presence that I’m aware of from Grenada,” he said. “It does have some Caribbean culture, so that is good.”

Being at Fort Bragg and in the military, he said he’s also been able to be exposed to other cultures, too.

“We have downtime for lunch or break, and we will discuss things from our culture, whether that be food or certain celebrations, music,” Abraham said. “In fact, those who cook when they cook something that’s unique to them, you get a taste of that as well.”

Chicken is an example, he said.

He said he is interested in learning how other cultures cook it, and said he sees curiosity amongst cultures and being able to “bounce ideas across each other.”

“People want to know, ‘What do you guys do (where you’re from),’ and they can experience that, and it creates more appreciation for each other,” he said.

As he is optimistic about counting down the days to being an American, Abraham said he’s seen others before him go through a process that he described as evolving and may be different for those wanting to become citizens after him.

“Remain on the ball and be efficient as you can,” he said of his advice to others wanting to become citizens.