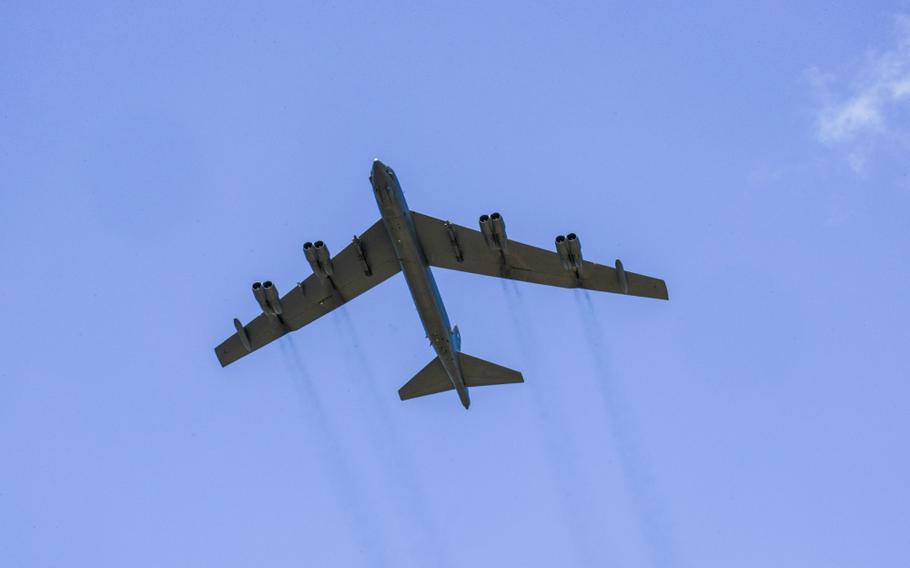 The B-52H Stratofortress aircraft, deployed to Moron Air Base, Spain, were expected to fly with aircraft from more than 20 allies, U.S. Air Forces in Europe-Air Forces Africa said in a statement.

It’s the second time a bomber task force deployed to Europe has conducted such a mission since the U.S. began deploying bombers to the region in 2018, USAFE said. The mission is called “Operation Allied Sky.”

The U.S. Air Force’s eight-engine bombers, based out of Barksdale Air Force Base, La., arrived at Moron Air Base two weeks ago. Four B-52s from the 2nd Bomb Wing and over 200 personnel deployed on a short-notice tasker, Air Force Maj. Marisa King, 96th Bomber Task Force director of operations, said in a video statement last week.

On Monday, the long-range heavy bombers were expected to conduct aerial refueling and integration flights with the aircraft of several allies over Europe, from Turkey to Norway. KC-135 Stratotanker aircraft based at RAF Mildenhall, England, were expected to support the mission, which also included a North American leg over the U.S. and Canada, supported by aircraft from those countries.

The last time U.S. bombers conducted an overflight of all 30 allies was in August, and that effort involved six B-52s out of Minot Air Force Base, N.D., escorted by some 80 fighter jets at various stages.

Since 2018, U.S. bombers deployed to Europe have taken part in more than 200 sorties with allies and partners, mainly as a deterrent response to Russia’s military resurgence.

The bomber rotation comes as the alliance conducts a series of large-scale exercises across Europe involving thousands of troops. It also follows Russia’s deployment last month of thousands of troops to the border area along Ukraine, which raised concern among NATO allies.

“Bomber missions demonstrate the credibility of our forces to address a global security environment that is more diverse and uncertain than at any other time in our history,” Harrigian said in Monday’s statement.