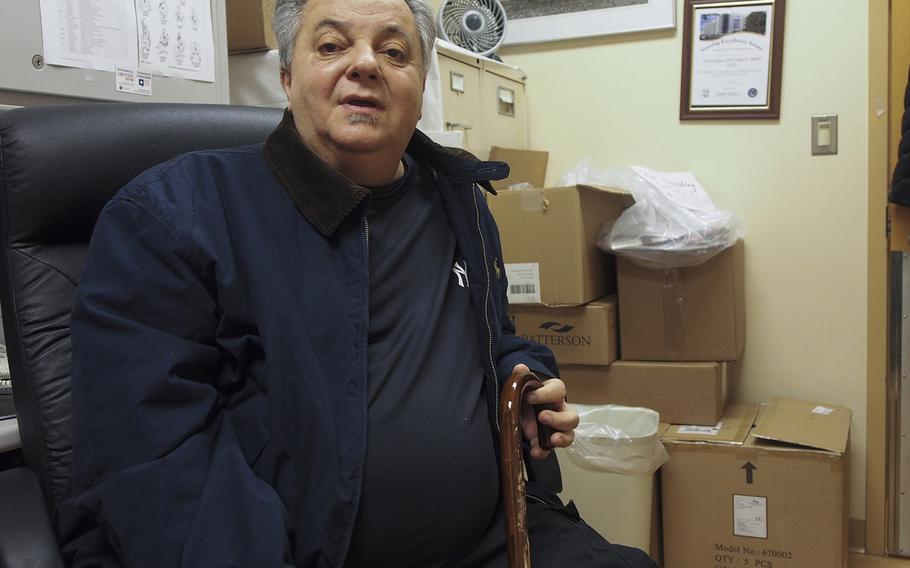 Buy Photo
Joe Sylvestri, 67, was suffering serious chronic pain when he first came to the Bronx VA Medical Center several years ago but due to a history of drug addiction wanted to find a solution without opiates. The Bronx VA, which has the lowest rate of opiate prescriptions in the VA, offered an approach that mixed rehabilitation exercises with acupuncture, which Sylvestri says has changed his life. (Heath Druzin/Stars and Stripes)

Buy Photo
Joe Sylvestri, 67, was suffering serious chronic pain when he first came to the Bronx VA Medical Center several years ago but due to a history of drug addiction wanted to find a solution without opiates. The Bronx VA, which has the lowest rate of opiate prescriptions in the VA, offered an approach that mixed rehabilitation exercises with acupuncture, which Sylvestri says has changed his life. (Heath Druzin/Stars and Stripes) Buy Photo
Dr. Heidi Klingbeil, chief of physical medicine and rehabilitation at the Bronx VA Medical Center, pulls an acupuncture needle out of a patient. Klingbeil has spearheaded a holistic approach to pain management that has greatly reduce the amount of opiates prescribed at the Bronx VA, as other VA hospitals face a crisis in opiate abuse. (Heath Druzin/Stars and Stripes)

NEW YORK — Dr. Heidi Klingbeil has a novel solution to the epidemic of opiate overprescription: Make a diagnosis in the first place.

That seemingly obvious step — along with follow-up treatment focusing more on rehabilitation than narcotics — has been the linchpin of a program that has brought her regional VA health care network to the bottom of a list where last place is coveted. They have the lowest rate of opiate prescriptions of any hospital in the VA health care system.

“If it sounds simple, the truth is, it is very simple,” Klingbeil said.

Her goal is to find a way to best treat patients’ underlying conditions that allows them to retain a high quality of life. Often, that means cutting or reducing opiate intake. Klingbeil rewrote the guidelines for pain management in her New York VA region and as chief of physical medicine and rehabilitation, she implements that policy every day.

Her approach in the VA’s Veterans Integrated Service Network 3, which encompasses the Bronx and Manhattan VAs as well as outlying areas, is particularly striking in light of a scandal at the Tomah VA Medical Center in Wisconsin. The hospital, known as “Candy Land” because its doctors were said to have been wantonly handing out opiates, has been under intense scrutiny after a former Marine died of an overdose there.

Several Tomah officials, including its chief of staff, have been reassigned or placed on leave, and the case has prompted a re-examination of how the VA approaches chronic pain.

VA leadership has nothing but praise for Klingbeil’s program; the department’s national pain management chief Dr. Rollin Gallagher calls it “terrific.” So why isn’t every VA hospital mimicking what Klingbeil has been doing since 2011?

Gallagher said the VA is working on implementing similar programs throughout the system and is taking a more holistic approach to pain management, with an emphasis on alternatives to narcotics when possible.

“Implementing that … around the country is a big challenge,” he said.

The VA says it has reduced the number of patients on opiates by about 90,000 since the end of 2012. But it hasn’t been nearly fast enough for many involved with veterans policy, and the VA is taking a bipartisan lashing.

“The problem of overprescription of opioids has been around for a long time. We can’t claim it has snuck up on us or surprised us. That’s one reason for my anger and astonishment that the VA system isn’t better than it is,” he said. “This problem is nationwide and not limited to any one facility.”

Finding alternatives At the Bronx VA, a bustling urban hospital eight subway stops from Yankee Stadium, Klingbeil said while the result of her department’s strategy has been a sharp reduction in opiate prescriptions, there is no crusade to cut the use of painkillers. Instead, she says, she focuses on improving the patient’s quality of life, and often that means cutting or reducing opiate intake.

“It’s hard to live and function on opiates, and in the end they stop relieving pain, too, or you end up needing more to feel the same pain relief,” Klingbeil said. To be on opiates is “to be trapped in a cycle of poor function and poor pain control.”

When new patients come to the Bronx pain clinic, they get diagnosed. If the cause of their pain is something that requires a medical procedure such as surgery, that is the first step. Klingbeil says many patients come in with years of high-dose opiate intake but no diagnosis of what is causing the pain.

“Many came in with opiates as a primary treatment strategy,” she said. “It was our conclusion that that wasn’t best serving them for improving their life.”

A regular runner, Klingbeil extolls the virtues of exercise and brings that zeal to the treatment of her patients. She says her way takes more work than prescribing painkillers, which may be why it hasn’t taken root.

Klingbeil and Bronx VA officials say taking a different approach to pain has also made it harder to get a prescription for those who sought to sell their prescribed opiates and those who abused the drugs.

Back injuries are one of the most common causes of chronic pain among veterans, so Klingbeil and her colleagues at the Bronx VA instituted a “back school,” an intensive program of four two-hour sessions, where patients learn exercises they can do at home to strengthen muscles in their back and relieve pain.

Joe Sylvestri, 67, an Army veteran who suffers from health problems connected to Agent Orange exposure in South Korea, says he could barely walk with a walker when he came to the Bronx VA several years ago. He had struggled with drug addiction and, despite the severe pain he was dealing with, he had to find a solution that didn’t involve narcotics.

So he learned exercises to help him deal with the pain and comes in for regular acupuncture. The pain is not gone, he said, but he walks well with a cane and can play with his grandchildren. Most importantly, for him, he’s stayed away from drugs.

For George O’Dell, 66, the pain started in Vietnam, where he lifted 100-pound Howitzer shells. He developed severe neck and back problems, had to get several vertebrae fused and was on heavy doses of narcotics as well as drinking a gallon of wine a week to quell the pain. He came to the Bronx VA desperate to be able to manage his pain while still keeping his senses.

It’s taken a lot of work, he said, but he’s greatly reduced his intake of opiates by learning exercises and plans to start swim therapy soon.

“It’s helped me with my mind big time, because for a while there I just wanted to give up,” he said.

Beyond the VA The approach at the Bronx VA bucks a trend that goes well beyond the VA health-care system.

“Doctors of my generation were taught not to worry about the addictive potential of opioids if a patient had true pain,” Dr. G. Caleb Alexander, co-director for the Johns Hopkins Center for Drug Safety and Effectiveness, told the Senate Veterans Affairs Committee last week. “Although well-intentioned, many doctors have unwittingly contributed to soaring opioid use.”

Dr. Mehmet Haznedar, a psychiatrist at Bronx VA who works closely with Klingbeil’s team to help his own patients, said that with the prevalence of psychological disorders that veterans often have on top of physical wounds, it’s especially dangerous to overprescribe narcotics.

“You’re just giving a Band-Aid to a patient who has a gushing wound,” he said.

Two obstacles may be aversion to change — prescribing opiates is the way a lot of doctors have always done it — as well as compassion. When patients arrive in pain, doctors want to stop it, and opiates are often the quickest way, Klingbeil said. It also takes more work to do it her way — from the treatment side and gaining the trust of patients who are used to taking narcotics.

But she says it’s well worth it. She says she doesn’t keep up to date on a lot her patients because many simply don’t have the need to come back to the hospital after they get a comprehensive pain management program.

“The results have been astonishing.”