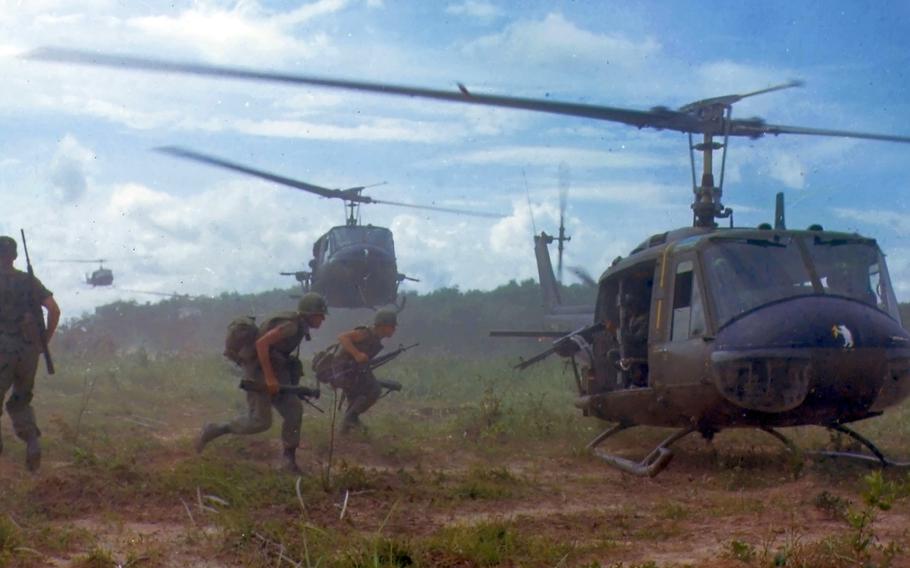 U.S. Army UH-1D Huey helicopters, similar to the one copiloted by Larry Zich when he crashed in 1972, airlift soldiers during a search-and-destroy mission in South Vietnam in 1966. (U.S. Army)

William M. Hammond, an official Army historian who challenged the belief among some in the military brass that negative press coverage of the Vietnam War — not flawed policy and rising casualty rates — eroded public support for the conflict, died Nov. 27 at his home in Silver Spring, Md. He was 79.

The cause was pancreatic cancer, said his wife, Lillamaud Hammond.

During a 39-year career as an official historian for the Army, Hammond published several major reports, but it was his two-volume, 1,000-plus-page study of the military’s relationship with the media — later synthesized in the 1998 book “Reporting Vietnam: Media and Military at War” — that won him acclaim.

Foreign Affairs magazine called his work, written in a narrative style unusual for bureaucratic reports, a “tale of complexity” that was “solidly wrought” and “painstakingly honest.” Newspaper editorials praised him for demolishing a myth peddled by Army generals and government officials that the media was to blame for the declining public support that led the United States to withdraw from Vietnam in 1975.

Public support for the war, Hammond wrote, dropped “inexorably by 15 percentage points whenever total U.S. casualties increased by a factor of 10.” In a 2002 C-SPAN interview, Hammond said that Americans simply turned the Vietnam War into an equation. “We are spending all of this — lives and treasure — and what are we getting for it?” he said. The American public “could not balance the books.”

“The news media, for their part, responded in kind,” Hammond wrote.

As casualties rose, the media’s initial positive coverage of the war — Hammond noted that writers initially referred to soldiers as “our troops” — shifted to tougher reporting that revealed government dissembling, poor planning and atrocities committed by U.S. forces such as the My Lai Massacre in 1968.

The Army history center ultimately cleared Hammond’s report for publication, with the first volume, covering 1962-1968, appearing in 1989. The second, covering 1968-1973, came seven years later. At least one powerful general tried to sidetrack it, Hammond told the Boston Globe in 1989, but he declined to name him.

Other officials also tried to intervene.

“He would often talk about how the leadership at the [U.S. Army] Center of Military History was trying to kill his book,” said David Hogan, a historian and former colleague of Hammond’s at the organization. But Hogan said military historian Stephen E. Ambrose, who served on a pre-publication review panel of the center’s work, helped Hammond “maneuver through the waters” to get approval.

Ambrose later called Hammond’s report “by far the best study of the press and armed services yet written.”

William Michael Hammond was born in Pasadena, Calif., on Jan. 1, 1943. His father was a salesman for Gerber baby food, and his mother made draperies. They were Catholics, and Hammond grew up with the expectation that he would become a priest, entering the Claretian seminary when he turned 12. But with one year remaining, Hammond decided priest life was not for him.

He enrolled at Catholic University, where he met Lillamaud Leike, his future wife, in the library. At the university, he received a bachelor’s degree in sacred theology in 1967, a master’s degree in history in 1968 and a doctorate in history in 1973, a year after joining the Vietnam branch of the U.S. Army Center of Military History.

The Vietnam War appealed to him, his wife said, because of the moral aspects. “The ethics, the decisions — he considered himself a social historian, and he was interested in making sure these mistakes wouldn’t happen again,” she said.

Hammond also co-wrote “Black Soldier, White Army: The 24th Infantry Regiment in Korea” (1996), recounting the experiences of Black soldiers during the Korean War. The book “explains in vivid detail the climate of racial prejudice surrounding the regiment in Japan and Korea and then in equally harsh terms, it uncovers the legacy of that prejudice in combat,” Army Brig. Gen. Roy K. Flint, who served in combat during the Vietnam War, wrote in the introduction.

While working as an Army historian, Hammond taught classes on Vietnam and the media in the honors program at the University of Maryland. In 1999, he received a fellowship to study at the Shorenstein Center on Media, Politics and Public Policy at Harvard University. He was also active in the Catholic Church, serving as an instructor for the Rite of Christian Initiation of Adults at St. Patrick Church in Rockville.

In addition to his wife of 49 years, Hammond is survived by two children, Michael Hammond of Hyattsville, Md., and Elizabeth Hammond of Monrovia, Md.; and four grandchildren.

“So many of the young officers really are opposed to spending much time studying the Vietnam War because they think the press lost it, the Army didn’t lose it,” he told the Globe. “That’s not good.”