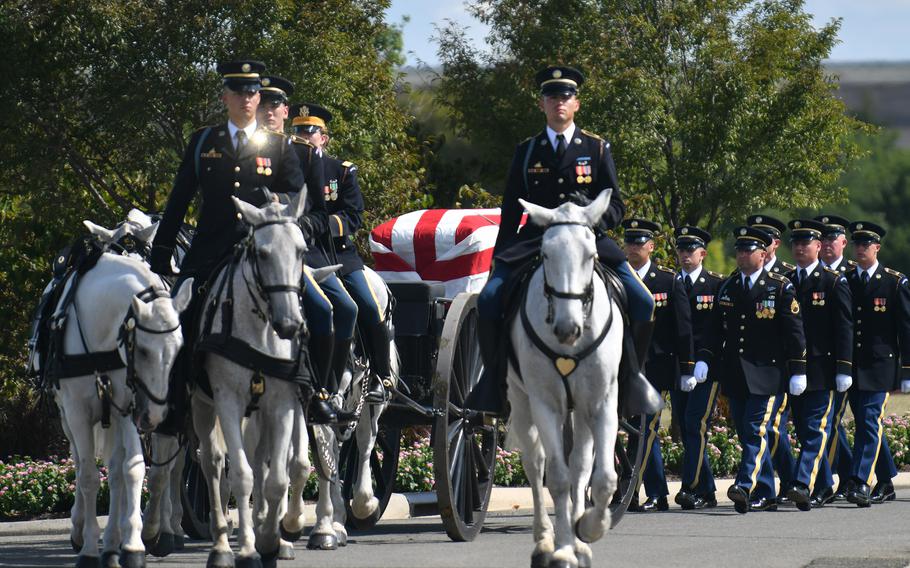 Lt. Col. James "Maggie" Megellas, a paratrooper who took part in several daring World War II operations and became one of the 82nd Airborne Division's most celebrated and decorated soldiers, was buried Friday at Arlington National Cemetery in a ceremony attended by the nation's highest-ranking officers.

Gen. Mark A. Milley, chairman of the Joint Chiefs of Staff, came to pay his respects to a soldier who had single-handedly knocked out a German tank, rowed across a Dutch river in a flimsy boat under enemy fire and often said the "Greatest Generation" would be the one that put an end to war.

Gen. James C. McConville, who is Army Chief of Staff, and Maj. Gen. Christopher C. LaNeve, who commands the 82nd Airborne Division, were also on hand, along with more than 50 mourners, including family who traveled from Megellas' home in Colleyville, Texas. All had come to honor a man who has been nominated — so far unsuccessfully — for a Medal of Honor.

Anna Salton Eisen, the daughter of a Holocaust survivor, came, too.

Her father, George L. Salton, had been a teenager near death when Megellas and other paratroopers appeared outside the barbed-wire fence of his Nazi concentration camp in the last days of World War II. He later recalled inching forward to touch the paratroopers' boots to make sure the soldiers were real, that he wasn't dreaming, that his nightmare as a slave laborer in Hitler's death camps might soon be over.

Eisen said she felt compelled to attend Megellas' funeral because her father, having died in March 2016 at 88, could not.

"I knew if my father was alive, I know this is what he would do and what he would want me to do — to pay my respects," Eisen, of Westlake, Texas, said. 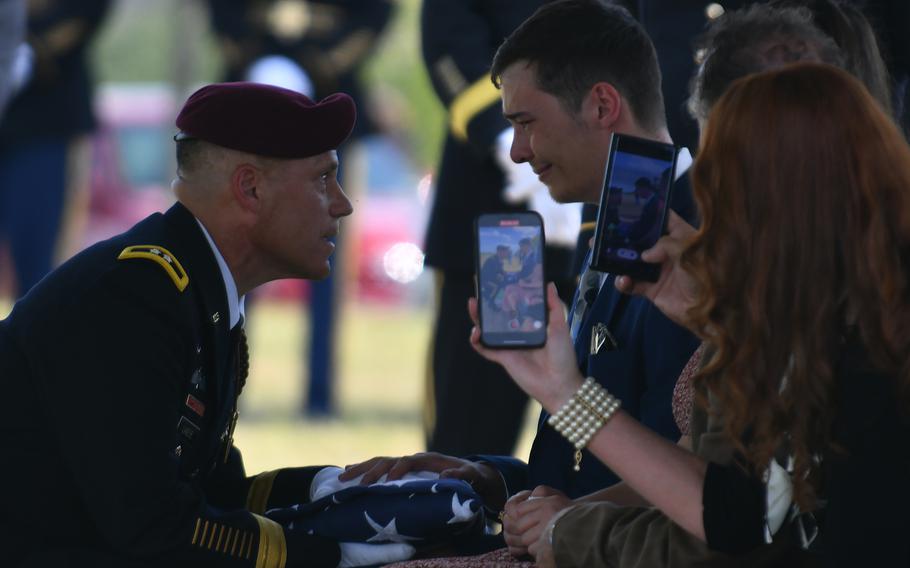 Megellas was known for being fearless, tenacious and calm under fire. He earned the Distinguished Service Cross — which is the military's second-highest decoration — two Silver Stars, two Bronze Stars, two Purple Hearts and other commendations that made him one of the 82nd Airborne's most decorated soldiers, division spokesman Capt. Darren M. Cinatl said.

Megellas [pronounced ma-JELL-is] was born March 11, 1917, in Fond du Lac, Wis., one of seven children of Greek immigrants. He learned to sail and fish on nearby Lake Winnebago, a love that would remain for the rest of his life, his family said. To help support his family during the Great Depression, he went to work with the Civilian Conservation Corps and later entered Ripon College and its ROTC program.

Megellas received a commission as a 2nd lieutenant in May 1942 and volunteered for the 82nd Airborne, whose lightly armed infantry parachuted into hot zones or behind enemy lines. They carried at least 80 pounds of gear and bailed out from heights of about 500 feet, often under fire and at a rate of descent significantly faster than parachutists today, Cinatl said. Their transports were often shot up with flak and sometimes downed.

Megellas — who led H Company of the 3rd battalion of 504th Parachute Infantry Regiment — first saw action in Italy, where he was wounded twice, Cinatl said. The 504th became known as the "Devils in Baggy Pants," a nickname taken from a German soldier's diary describing troops that seemed to pop out of nowhere, determined to fight.

His first parachute combat mission came with Operation Market Garden, the largest airborne assault in history, Cinatl said. The ill-fated plan, which aimed to sweep around heavy German defenses by cutting through the Low Countries, required Allied airborne forces to seize key bridges behind enemy lines and hold them until armor could advance. 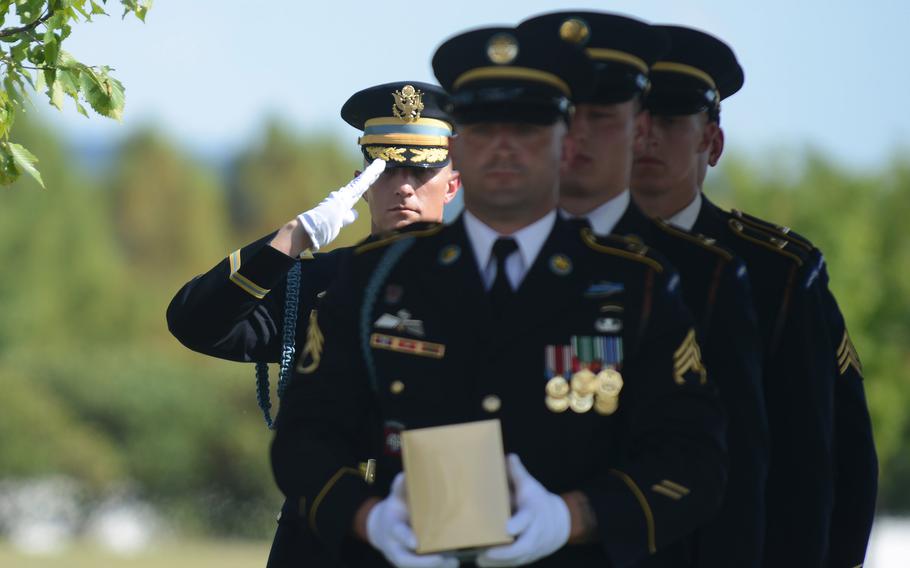 Megellas also fought during the Battle of the Bulge and its aftermath. On Jan. 28, 1945, he was leading his platoon into the Belgian town of Herresbach following a 10-mile march through heavy snow when the unit encountered a Mark V Panther tank with its machine gun blazing.

Megellas, armed with only a Thompson submachine gun and grenades, ran toward the tank, halted it with a grenade, climbed onto its turret and pitched another grenade inside, knocking out the Panther and leaving his men in awe.

"I saw a figure run up to the tank and heard an explosion and saw a flash of light," George Heib told the Milwaukee Journal years later. "I said, 'Who the hell is that crazy [expletive]?'"

Megellas then led an assault on German forces in the town. For his heroism, he was nominated for a Medal of Honor, but received a Silver Star instead because of omissions in the original paperwork submitted for commendation, according to an account of his wartime experience that Megellas recorded for the nonprofit American Veterans Center in 2015.

On May 2, 1945, Megellas and several paratroopers entered Wöbbelin, a satellite of the Neuengamme concentration camp near Ludwigslust, and wasn't even sure what he had found when he encountered skeletal prisoners like Salton, who was then 17 years old and all of 75 pounds.

Salton — who had been born Lucjan Salzman, with the nickname "Lucek," in the Polish village of Tyczyn — had been separated from his family three years earlier after the German invaders started rounding up Jews.

"We didn't know about concentration camps," Megellas told the Fort Worth Star-Telegram. "We'd been in combat two years, and we'd seen a lot of men killed in battle. But this was a horror you'd never forget — men weighing 50 or 60 pounds."

That first meeting between the paratrooper and the prisoner would eventually lead to others, including a face-to-face reunion 60 years later in Texas.

"In you, I see living proof of what we fought for in World War II," Megellas was quoted as saying by the Star-Telegram when the two men met again in 2005. 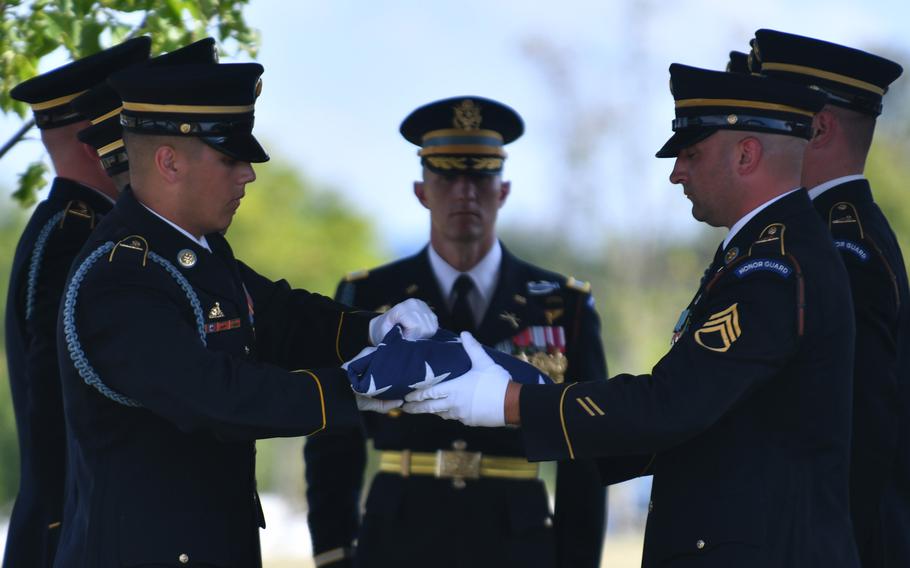 Each had gone on after the war to marry, raise children and build successful careers in the government and private sectors. Each documented his wartime experience in memoirs, documentaries and speaking engagements. Each embodied in different ways the harrowing victory of the human spirit in a time of unimaginable darkness.

Salton served in the U.S. Army, worked for the Defense Department and published a book — "The 23rd Psalm: A Holocaust Memoir" co-authored with Anna — in 2002. He lectured at schools nationwide and contributed recorded testimony to the U.S. Holocaust Memorial Museum.

Megellas served on his hometown's city council, ran unsuccessfully for Congress, worked overseas for the U.S. Agency for International Development and wrote an autobiography, "All the Way to Berlin: A Paratrooper at War in Europe," in 2003. His military exploits also were recounted in the documentary "Maggie's War: A True Story of Courage, Leadership and Valor in World War II." John Ratzenberger, of "Cheers" fame, played him in the 1977 Hollywood movie, "A Bridge Too Far."

Well into in his 90s, Megellas even embarked on a book tour of sorts in Afghanistan, signing copies of his memoir and rousing the spirits of U.S. military personnel stationed there.

A few years before his death, Megellas told family that his mission wasn't over because he should be doing more to make the world a saner, more just and peaceful place. He died April 2, 2020, at 103.

"It's such a loss for me that he's gone because he was so incredible," his son James A. Megellas, 59, of Colleyville, Texas, said in a telephone interview Saturday.

About 3:15 p.m. Friday, Megellas' funeral procession approached his final resting place, led by the slow, muffled beat of a drum.

Several of the nation's highest military officers, including Milley — smartly attired in blue dress uniforms, their white-gloved hands snapping to salute and their medals flashing — lined the pavement.

Across from them stood a scruffy line of about 20 members of the Patriot Guard, a motorcycle group of veterans in black leather vests, T-shirts and jeans. They saluted, too, as the flag-draped caisson, drawn by six gray horses, drew forward.

A soldier, gingerly, with almost mechanical precision, removed the silver urn containing Megellas' cremated remains from the caisson and carried it to the gravesite. Nearby stood a military band, an 82nd Airborne color guard and a firing party, its seven soldiers arrayed in line.

Three volleys of gunfire sounded, and a bugler played taps. Soldiers folded the flag until it was only a triangle of stars.

Then LaNeve, the 82nd Airborne's commanding general, went down on one knee to present the flag to Megellas' 25-year-old grandson, J. Trace Megellas, as a symbol of the nation's thanks.

"I said to General Milley when we left, 'You guys lost a great soldier, and I lost a great father,'" Jim Megellas said afterward. "But, honestly, the world lost a great man."