(Tribune News Service) — If you had told any of Dean “Diz” Laird’s friends or family that he would die of old age at 101, they probably would have written you off as crazy.

Between 1942 and 1945, Laird spent much of his time weaving through bullets over the Pacific and Atlantic oceans in a Grumman Wildcat or Hellcat, becoming the first fighter pilot to shoot down enemy craft in both naval theaters. He died Aug. 10, according to a news release from the San Diego Air & Space Museum.

The key to life, his family and friends said, was his “just ask” mentality. To the man who embodied “fighter pilot bravado” since he was a boy scout, anything seemed possible. Even so, the kid from Northern California never could have imagined what was to come.

His Navy career started in 1942, just 12 days after the attack on Pearl Harbor, and ended 29 years and three wars later. In nearly three decades of service, Laird, of Walnut Creek, earned numerous commendations, including the Distinguished Flying Cross and the Congressional Gold Medal. He nabbed the rare title of an “ace,” a classification of fighter pilots credited with shooting down five or more enemy aircraft.

He also had a little fun along the way: Laird won first place at the 1949 National Air Races flying an F2H Banshee — an early jet — from the USS Midway in the Atlantic to Cleveland, Ohio, clocking 549 mph, the fastest air speed recorded at the time. And in 1969, he even broke into showbiz, flying 160 hours worth of stunts for the blockbuster movie “Tora! Tora! Tora!” about the attack on Pearl Harbor.

But there was a time before Laird was one of the most decorated Navy pilots in history, back when Commander Laird was just “Diz,” short for Dizzy. Dean Samuel Laird was born Feb. 7, 1921, in Loomis, California. As a kid, Diz was about as far as you could get from the sky — he helped his father tend to the family farm’s crops, and eventually earned the responsibility of milking cows. But Diz had his sights set on the horizon.

He grew up on pulp magazines like “Flying Aces” and “Air War,” imagining that he would one day have the opportunity at stories of his own. Little did he know, by the time he retired from the military, he would have enough stories to fill a stack of magazines all by himself. Maybe there was something in the water at Placer Union High School in Auburn, Calif. Along with Laird, the graduating class of 1939 also contained Clarence “Bud” Anderson, a World War II fighter pilot who is the highest scoring living fighter ace.

Anderson, 100, doesn’t remember much about his high school days. But Diz’s presence is hard to forget, even after more than 80 years and multiple combat tours. The two first met as boy scouts, just before high school.

“He was just a real good guy,” Anderson said. “He was likable, popular, made everyone laugh.”

Though the two were not close friends in school, their shared fascination with planes would bring them together. Anderson hitched a ride with Laird and his older brother down to Arizona to enlist. Laird chose the Navy, while Anderson opted for the Army Air Corps, now known as the Air Force. They would cross paths time and again later in their lives.

“What are the chances?” Anderson asked. “From the same high school to the opposite ends of the world and then back together again. That’s pretty rare.”

The two enlisted at the height of the war, knowing full well the low odds of returning. It didn’t take much to convince Laird.

“I had seen a newsreel that showed a vintage airplane landing aboard, and I thought, ‘Man, that’s gotta be more fun than anything.’ So I went out and joined the Navy,” he said in a 2017 interview, one of several oral histories collected in the Dean “Diz” Laird collection at the USS Hornet Museum.

Laird is most widely known for his heroics in World War II, but he continued in the military until 1971, serving on aircraft carriers and naval air stations around the world. He made 32 trans-Pacific flights during the Vietnam War.

“You can live your whole life and do so much good, and really for so many observers it’s just distilled down to one contribution,” said his daughter, Andrea Laird.

To this day, she is approached by people who tell her they flew with Diz in the cockpit years ago.

After the military, he bought a small restaurant at Coronado Municipal Golf Course just outside of San Diego, where he could stay close to his Navy buddies and be a part of the community.

“Everything he achieved, he earned by going out and asking ‘Hey, can I do this?’” Achelis said. “Whether it was being one of the lead stunt pilots in ‘Tora! Tora! Tora!’ or being one of the oldest guys to fly back from Vietnam after serving three different wars, nobody could ever take that courage away from him.” 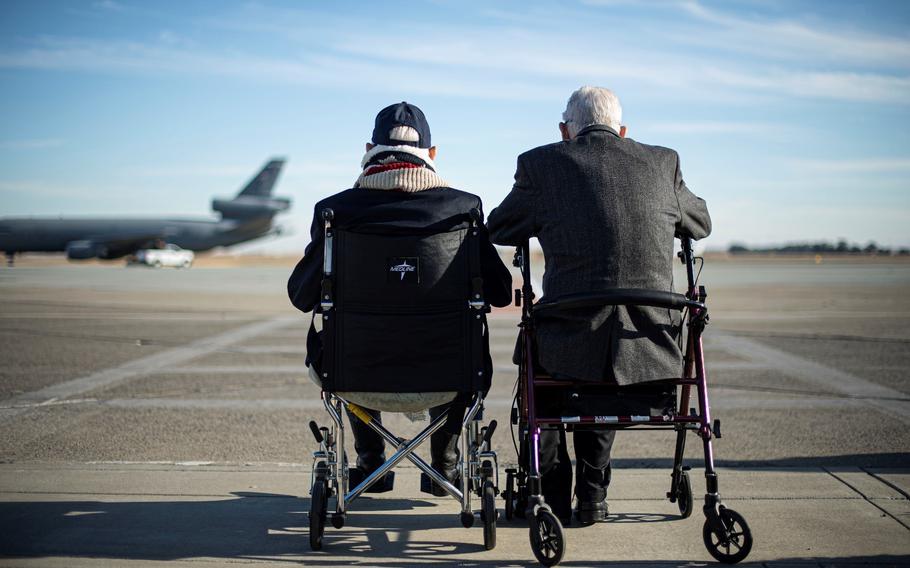 Earlier this year, Dream Flights, a Nevada company that honors veterans, gave Laird and Anderson what may be a final ride in the sky. The two sat in the cockpit of a Stearman Biplane, a model they once flew in military training in the 1940s, but this time the plane was controlled by another pilot.

It’s a good thing neither one of them took the helm: “We really enjoyed being in a plane again, but to be honest, neither of us could even see the controls,” Anderson laughed.

Laird, who celebrated his 90th birthday by parachuting out of a plane for the first time, demonstrated his trademark dry sense of humor before the flight in a story in the San Diego Union-Tribune: “Well, I’m looking forward to flying, but not falling out — and if I do, I hope the parachute works. I also hope I don’t get air sick.”