Paul Rinn, Navy captain who saved a warship from sinking, dies at 75 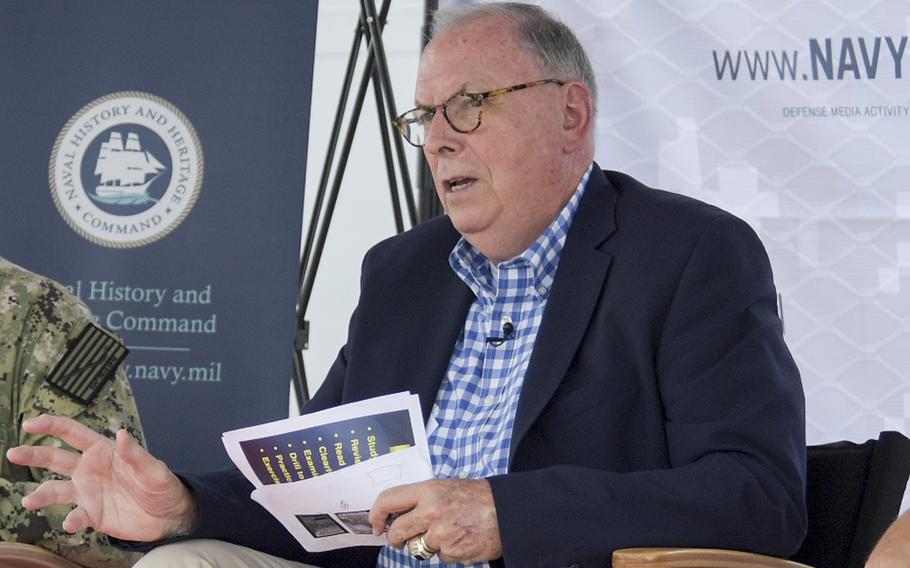 Paul X. Rinn, a Vietnam War veteran and ship captain who in 1988 led a desperate effort to save a U.S. Navy vessel from sinking after it struck an Iranian mine, died Aug. 3. He was 75.

His inspirational leadership in the face of crisis made him an icon among fellow sailors long after his retirement at the rank of captain in 1997. He served 29 years in the Navy and settled in Fairfax Station, Va., eventually turning full-time to lecturing on military leadership and shipboard operations at the service's professional schools and elsewhere.

Rinn died unexpectedly while in Boston for a speaking engagement, his family said. A cause of death was not provided.

As skipper of the frigate Samuel B. Roberts, Rinn took his crew into the war-torn Persian Gulf where they joined other U.S. warships protecting Kuwaiti tankers that had been reflagged as American vessels during the Iran-Iraq War. Returning from a convoy on April 14, the frigate struck an Iranian contact mine, which blew a massive hole in the hull.

The explosion broke the Roberts' keel and knocked out its electrical power. The ship immediately began taking on water. But Rinn had prepared his crew for such an emergency, crew members recalled, and over four grueling hours they saved the vessel, which the Navy repaired and kept in service for another 27 years.

The fight to save Samuel B. Roberts remains a case study in combat preparedness and a model emulated by successive generations of commanding officers, said Bryan McGrath, a retired U.S. Navy destroyer captain and consultant.

"Captain Rinn had enormous influence in the way that captains who commanded after him approached their job," McGrath said. "What we all heard from our captains and what we all heard from the training pipeline was a similar story: We're going to practice this over and again, until it's perfect. And then we're going to practice it perfectly over and over again.

"That's what I told my crew maybe 500 times. That is the legacy of Paul Rinn and the lessons that came out of Samuel B. Roberts: They were ready. They had prepared. They had actually thought through things. And they performed when it was most important."

Born in the Bronx on Sept. 13, 1946, Paul Xavier Rinn was educated in Catholic schools and at Marist College in Poughkeepsie, N.Y. Commissioned as a naval officer in 1968, he was sent a few years later to advise Thai riverine units in southeast Asia.

Firefights on the muddy Mekong River taught Rinn that he had to let go of the things he could do nothing about, and focus with all of his intensity on the things he could change, he told an interviewer many years later. Combat would push you past anything you could imagine, he said; for those who weren't already prepared, it was too late.

Successful tours aboard surface warships led Rinn to his first command in 1984: the guided missile frigate Samuel B. Roberts, then under construction at Bath Iron Works. As the ship came together, the captain gathered his chief petty officers to set the tone for the crew. "There aren't any second-place awards in combat. I don't intend this ship to be a second-place ship. I want this ship to be the best ship there ever was," he recalled telling them. "But the key is that I want every sailor who ever served on the ship to think this the best thing he could ever possibly have done with his life for those three years."

Rinn put the crew through months of intense training, and by the time the Roberts sailed on its maiden deployment, it had beaten out seven other frigates to win the squadron's Battle E award, which goes to the best overall ship.

Gordon Van Hook, a retired Navy captain who served as the Roberts's chief engineer, recalled that the crew responded to Rinn's energy and demanding standards.

"Paul had that sports mentality of: I want to be the very best. And the crew loved it; they ate that stuff up. And that's not always the case, you know. A lot of times if you have a really demanding captain, it can be difficult."

On the day of the mine strike, the Roberts was returning from escorting a reflagged Kuwaiti tanker, which it was protecting from roving Iranian frigates and fighter jets hunting for vulnerable targets. The blast severely injured 10 U.S. sailors, including four burn victims and Rinn himself, who suffered a broken foot.

Though wounded, Rinn and his sailors fought fire and flooding into the evening, beating long odds and making headlines around the world.

Rinn went on to command the cruiser Leyte Gulf and eventually to serve as special assistant to two chiefs of naval operations: Adm. Mike Boorda and Adm. Jay Johnson. The lessons of the Roberts were taught across the Navy, from Surface Warfare Officers School in Newport, R.I., to damage-control classes in Pearl Harbor.

After leaving the Navy, Rinn worked for defense consultancy Whitney, Bradley and Brown. But he spent increasing amounts of time in Navy schoolhouses, talking about leadership and the lessons of his experience and forging relationships with hundreds of officers and enlisted sailors. In 2008, Rinn was inducted into the hall of fame of the Surface Navy Association, cementing his status as a Navy icon.

"For those of us who have been in command, for our whole careers we've had our captain standing over our shoulder," said Thomas Rowden, a retired Navy rear admiral who served as the service's top surface warfare officer in 2018. "And then the day comes when you take command and there's nobody over your shoulder. It's just you. It's the greatest feeling in the world.

"Now, there will always be challenges and dangers when you take ships to sea and what Paul gave us was the power of his example. We can all look at Paul, and we can all look at the [Samuel B. Roberts], and hope that if push comes to shove and I'm tested in that way, that I can measure up. Because Paul measured up."

David Larter, a Navy veteran, was a defense journalist for more than a decade. Bradley Peniston is deputy editor of Defense One and the author of "No Higher Honor: Saving the USS Samuel B. Roberts in the Persian Gulf."