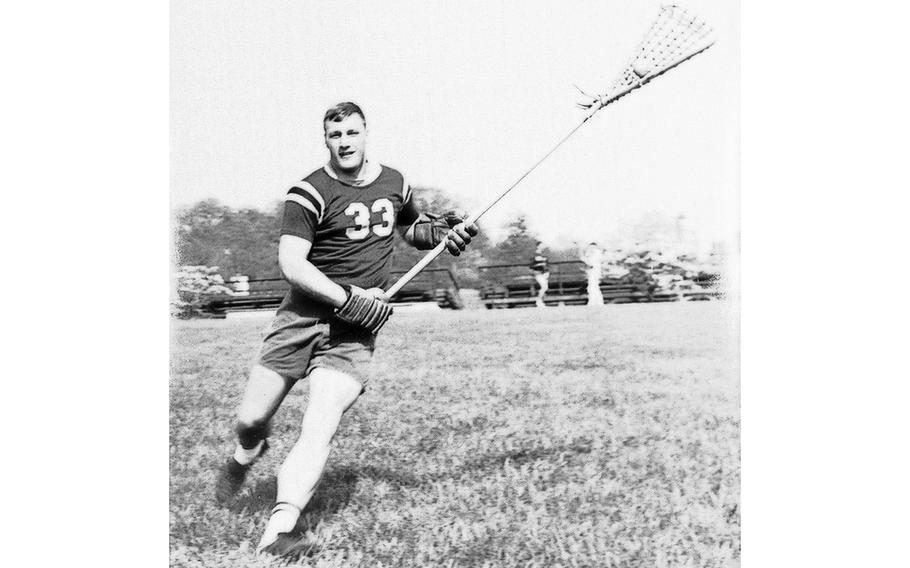 Carl Tamulevich developed into one of the greatest defensemen in college lacrosse history, a two-time first-team All-American always assigned to cover the opponent’s top attackman. He earned the Schmeisser Award as the top defenseman in Division I as a senior and was inducted into the National Lacrosse Hall of Fame in 1989. (U.S. Naval Academy)

(Tribune News Service) — A few months ago, Rear Adm. John Wade was given 24 hours notice to report to the Pentagon from his posting in Honolulu, Hawaii, for important meetings.

It was a tight schedule with Wade required to return quickly to his duties as director for operations of the United States Indo-Pacific Command.

However, Wade made sure to rent a car and travel to Annapolis to visit with Carl Tamulevich. There was no way Wade would be an hour away and not take time to catch up with the man who was a significant influence on his life.

“Carl became a father figure and mentor for me from the day I first met him as a plebe at the Naval Academy,” Wade told The Capital.

Navy athletics lost a legendary figure Sunday night when Tamulevich died at the age of 79. The longtime Annapolis resident died at Anne Arundel Medical Center from complications related to cancer.

Tamulevich was a two-sport standout at the Naval Academy, a bruising fullback in football and tenacious defenseman in lacrosse. He recently retired after serving 26 years in the Navy and another 30 with the Naval Academy Athletic Association.

“We are heartbroken to lose our cherished friend and distinguished alum,” Navy Athletic Director Chet Gladchuk said in a statement. “Carl touched the lives of so many in such meaningful and influential ways throughout his life as a mentor and role model to all.

“Our fond memories of Carl — his laugh, humor, personality, professionalism and kindness — will always be ingrained in the lives of those who were fortunate enough to know him.”

Tamulevich is one of the most legendary athletes in the history of Nashua High in the New Hampshire town of the same name. He was an All-State selection in football, basketball and baseball while helping Nashua capture five state championships in those sports.

“Carl was a local hero in Nashua, N.H.,” said Lori Tamulevich, who met her future husband while in high school.

Carl Tamulevich initially followed in the footsteps of his father, who was also a star athlete at Nashua, by attending Holy Cross. He lasted just one semester due to poor grades, a setback that would prove a blessing in disguise.

Tamulevich had been recruited for football and baseball by the Naval Academy and was told the opportunity was still open provided he spent a year at prep school. He reported to the Naval Training Center Bainbridge in Port Deposit, and thus began a lifelong association with the service.

Tamulevich spent two seasons with the Navy varsity football team and enjoyed many great moments as one of two primary fullbacks. The former Lori Herrick said the first date with her future husband took place after the 1966 Army-Navy game in Philadelphia. They got engaged exactly one year later at the 1967 edition of the classic rivalry.

“It was an honor and a privilege to be Carl Tamulevich’s wife,” Lori said. “Loving him was easy because he was so kind, compassionate and giving.”

Although Tamulevich had planned to play baseball for coach Joe Duff at Navy, he wound up becoming a star in a different spring sport. Hall of Fame coach Willis Bilderback put forth a full-court press to recruit Tamulevich to play lacrosse.

“Coach Bilderback wrote me three letters during plebe year saying he hoped I would come out for lacrosse,” Tamulevich recalled in March after his retirement. “I figured if the man wanted me to play that badly, I should give it a try.”

Naval Academy Athletics Legend Carl Tamulevich Passes Away at the Age of 79 https://t.co/bTd2DN5JTm

Tamulevich developed into one of the greatest defensemen in college lacrosse history, a two-time first-team All-American always assigned to cover the opponent’s top attackman. He earned the Schmeisser Award as the top defenseman in Division I as a senior and was inducted into the National Lacrosse Hall of Fame in 1989.

Navy compiled a 27-6-1 record and captured two United States Intercollegiate Lacrosse Association national championships during Tamulevich’s three seasons on varsity. He shut out Maryland star Jack Heim when he was the nation’s leading scorer and had to cover another future Hall of Famer in Jack Cowan of Johns Hopkins.

Tamulevich graduated from the academy in 1968 with a management degree after initially declaring as an aerospace engineering major. He went to flight school at Air Station Pensacola and then underwent multi-engine training at Air Station Corpus Christi.

Former athletic director James “Bo” Coppedge was responsible for bringing Tamulevich back to the academy to serve as executive officer of the physical education department. After two years in that role, Tamulevich transitioned to deputy director of athletics under Coppedge.

Tamulevich was promoted to senior associate athletic director, and remained in that role after retiring from the Navy in 1992 with the rank of commander.

Tamulevich served as the sports administrator for men’s lacrosse throughout most of his tenure with the Naval Academy Athletic Association, working with four coaches over three decades.

Richie Meade, who served as Navy lacrosse coach from 1995 to 2011, said Tamulevich was a mentor and confidant.

“Carl was like my big brother, and it meant a lot to have him in my corner,” Meade said recently. “He was a very important part of my experience at the Naval Academy. Through good times and bad times, Carl was always there to provide support.”

Current coach Joe Amplo quickly developed a close relationship with Tamulevich and credits the Navy legend for making his transition to the academy smoother than it could have been.

“Carl was the fabric of Navy lacrosse for generations. He’s been the heartbeat, the example, the icon,” Amplo said. “ Carl Tamulevich is everything that Navy lacrosse is all about and to lose him is a tough blow.

“He has been the support system for every coach and player who has ever represented this program,” added Amplo, who played golf with Tamulevich a month ago.

Tamulevich also served as the sports administrator for women’s soccer for most of the 30-year tenure of coach Carin Gabarra and they developed an extremely close relationship.

“Carl was always an incredible advocate, not only for women’s soccer, but every sport at Navy. He was true blue and gold through and through,” Gabarra said. “Carl’s passion for the Naval Academy Athletic Association and the midshipmen who played varsity sports was off the charts. He just cared so much and loved deeply everything about Navy athletics.”

Lori Tamulevich considered Gabarra her favorite varsity coach and always pushed her husband to give the women’s soccer program whatever it needed. “I’d ask for certain things and Carl would initially say no, but I’d eventually get him to say yes,” Gabarra said with a laugh.

Tamulevich had been recovering well from cancer treatments and was playing golf quite often in retirement. However, his health took a turn for the worse in recent weeks and Gabarra made several trips to the hospital to lift the spirits of her former boss.

“The last time I saw Carl I brought him a big ice cream sundae and we spent a few hours talking. Those are moments I will now cherish forever,” Gabarra said. “In my opinion, Carl Tamulevich epitomizes what the Naval Academy is all about. He was a special human being who cared deeply about this institution and what it stands for.”

Wade lost his father at a young age and was in need of direction and guidance after arriving at the Naval Academy as a recruited lacrosse player in 1986. Meade, who was defensive coordinator under coach Bryan Mathews at the time, asked Tamulevich to serve as the plebe’s sponsor.

Wade spent many hours at the Tamulevich home off West Street and said he learned many key leadership lessons from the man he would grow to admire so much. Hard work and commitment were obvious lessons, but Carl Tamulevich also stressed maintaining a positive attitude, smiling — even during the tough times — because it’s contagious, and taking good care of those you are charged to lead.

Wade always remembered Tamulevich telling him to maintain a proper balance between work and life, that relationships with family and friends give a person energy and purpose.

“All those early leadership lessons I learned from Carl shaped me into the husband, father and Naval officer I am today,” Wade said.

In addition to his wife of 54 years, Tamulevich is survived by his son Jeff and daughter-in-law Amanda, the widow of his late son CJ. He is also survived by seven grandchildren — Drew, Madison, Genevieve, Alex, Lauren, Tabitha and Lily Bell.

Tamulevich was preceded in death by his parents, Bolic and Gladys, along with his brother Michael.

Funeral services are still to be determined and will be announced at a later date.

“I can’t imagine there is anyone who has ever met my dad and does not hold him in the highest regard,” Jeff Tamulevich said.