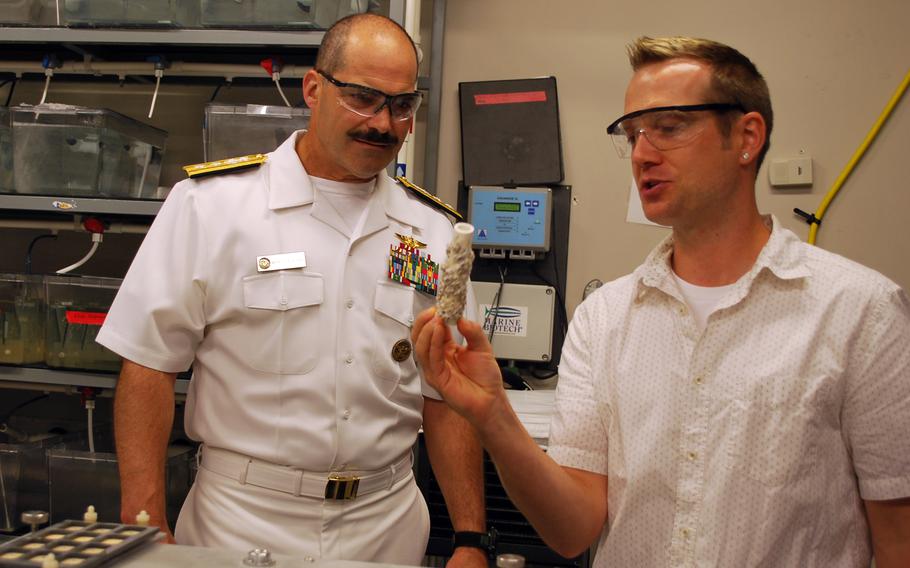 (Tribune News Service) — Retired Rear Adm. Mark D. Guadagnini, a Long Beach native who spent his entire career in the U.S. Navy and served as director of Maritime Headquarters in the U.S. Fleet Forces Command, has died. He was 64.

Guadagnini, a naval aviator who climbed the ranks until he held one of the highest posts in the Navy, died June 11, according to his obituary, with the cause suspected of being a heart attack. He was at home in Virgina with his wife, Donna Guadagnini.

He retired in 2013. By that point, Guadagnini had amassed 4,700 flight hours and 95 combat missions, according to the Navy's historical curator.

"He did have a good life, I'm very happy about that but it's all too short," his mother, RoseMarie Guadagnini, said. "There was so much love and positivity in his life, really."

Loved ones described Guadagnini as a hard worker, intelligent, a dedicated military officer and family man, whose death was a surprise.

"He was a very hard worker, he was a very smart guy and he was very athletic even when he passed," said his younger brother, Frank Guadagnini. "It was a shock because he was a dedicated fitness person."

The outpouring of support, he added, has underscored how well-loved he was.

"I know there has been a lot of outpouring of cards, letters, emails and texts to my parents, me, my sister and my sister-in-law and all of my brother's children," Frank Guadagnini said. "We really all appreciate the multitude of support and love that we got after his passing."

He spent his freshman year of high school at St. John Bosco, in Bellflower, before transferring to the public Wilson High School.

As a junior, he was elected out of all the male students in his grade throughout the Long Beach Unified School District to represent the seaside metropolis in its sister city of Yokkaichi, Japan. It was a great experience for him, his brother said.

During his senior year, Guadagnini split his time between Wilson and Poly high schools so he could join the latter's School of Educational Alternatives, which served high-achieving students.

He was also a two-sport varsity athlete, lettering in football and baseball, was the first male student in Wilson's modern dance class and even ran for student body president his senior year. Guadagnini graduated from Wilson in 1975.

After spending a year at Long Beach City College, Guadagnini applied to the U.S. Naval Academy and took the oath of office on July 6, 1976.

He loved the water, which likely led him to join the Navy, his family said.

"My parents, sister and I have been talking about when he was about 13, we took a family weekend vacation to Catalina Island," Frank Guadagnini said. "He told us out of the blue that one day he was going to live on a boat."

Guadagnini was also an avid fisherman and the brothers would go fishing two to three times a week when they were kids.

"He was a water baby from the time he was born," his mother said. "He'd love to swim, fish, all that kind of stuff, so it didn't surprise me that he went into the Navy. It did not surprise us."

Rear Adm. Samuel J. Cox, Navy curator and director of Naval History and Heritage Command, wrote an in-depth resume of Guadagnini's naval career. Most notable is how Guadagnini was able to rise in the ranks.

Guadagnini came from a working, middle class family in Long Beach that didn't have any connection, his brother said, and yet "he rose up to one of the highest positions in leadership that the nation has to offer."

He coached women's volleyball and majored in economics at the academy in Annapolis, Md., graduating with distinction and a commission as an ensign in May 1980, Cox wrote.

Guadagnini was also first in his class at the Navy Fighter Weapons School, commonly known as TOPGUN — then located at the Naval Air Station in Miramar — before reporting to Naval Aviation Schools Command in Pensacola, Florida, for flight training in September 1980.

He was promoted to lieutenant junior grade in May 1982, Cox wrote, and subsequently designated as a naval aviator.

He was promoted to a full lieutenant in June 1984.

And he continued rising through the ranks.

Guadagnini was promoted to lieutenant commander in June 1990.

In May 1993, he served in the office of then Sen. John McCain, R-Arizona, as a legislative fellow in Washington, D.C.

In August 2007, Guadagnini was designated a rear admiral lower half and a month later, he became chief of Naval Air Training. He was responsible for 10,000 personnel and 725 aircraft, and successfully trained 8,000 pilots, navigators and enlisted aircrew.

In June 2011, Guadagnini became deputy commander for fleet management at U.S. Fleet Forces Command, and also served as chief of staff for his commander. In August of that year, he was promoted to rear-admiral upper half, a two-star rank.

A year later, Guadagnini became director of Maritime Headquarters for U.S. Fleet Forces Command, the post he held until he retired on Oct. 1, 2013.

That same year, Guadagnini spoke at the Honoring Those Who Served luncheon, hosted by U.S. VETS, an organization that works to end homelessness among military veterans. Guadahnini also served as grand marshal for the 17th annual Long Beach Veterans Day Parade in North Long Beach.

"What struck me about him as much as anything was his humility and he was super easy to work with," said Mike Murray, former chairman of the advisory council for U.S. VETS, who met Guadagnini the day of the luncheon.

"He just seemed so grounded," Miller said. "I thanked him for coming (to the U.S. VETS luncheon) and he said, 'Oh no, it's very important that we don't forget about our veterans, especially the ones who are in need.'"

After retiring from the Navy, Guadagnini worked for Shell Oil as vice president of maritime logistics for arctic exploration. He worked for the company in Houston, Nigeria, the Netherlands and Alaska.

From the end of 2018 to earlier this year, he worked for Royal Dutch Shell and then became self-employed.

Guadagnini loved golfing, fishing, cooking, gardening and playing with his grandkids. He was also a huge fan of baseball, particularly the Los Angeles Dodgers.

"He was gone a lot," his wife, Donna Guadagnini said, "but when he was around I don't think anybody could have asked for a better husband or a better father."