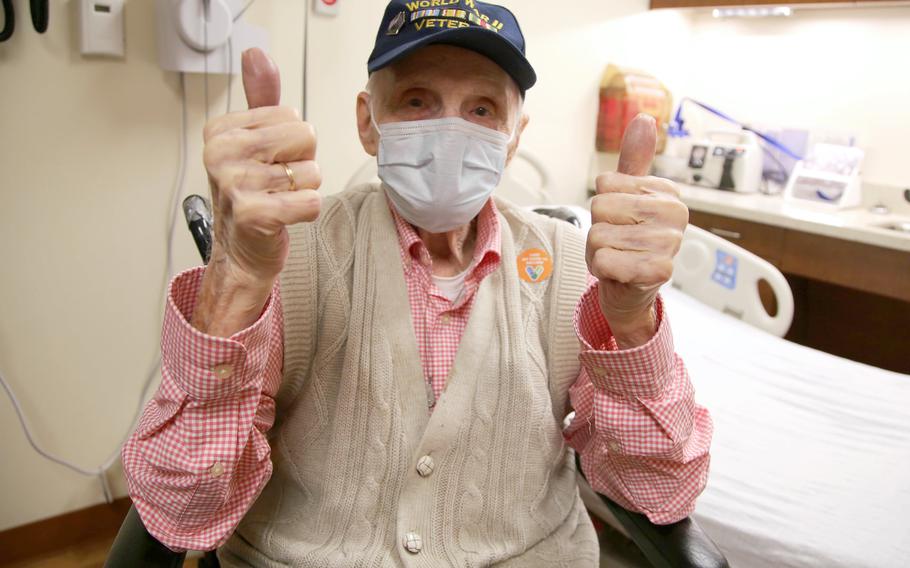 A World War II veteran and longtime deputy chief of the Pittsburgh Bureau of Fire, Frederick Steinkirchner died April 16 after a series of cardiac problems. At 109 years old, he was one of the 10 oldest men in America. (Orlando VA Healthcare System/Facebook)

Just five months earlier, the Titanic had sunk in the North Atlantic.

That year, the Homestead Grays professional baseball team was officially formed, and a loaf of bread cost about a nickel.

Frederick A. "Fred" Steinkirchner was around for all of it.

A World War II veteran and longtime deputy chief of the Pittsburgh Bureau of Fire, Steinkirchner died April 16 after a series of cardiac problems.

"My father was also the fourth-oldest veteran in the U.S.," said his son Paul Steinkirchner, of Windermere, Fla., where his father also lived the last two years of his life in a retirement home.

Though he was physically a bit frail, his father still had much joie de vivre and even drove his own car until recently, Paul Steinkirchner said.

"He was fully alert until the last day of his life," he said. "We talked every day, and he managed his own stock portfolio. He had an iPad that he used every day, and he FaceTimed everyone. He was connected and very involved in life. And he still had a valid driver's license."

Steinkirchner lived in Pittsburgh for more than a century, including in his hometown of Lawrenceville and in the city's Westwood neighborhood, where he and his wife lived until her death in 2018.

In a memoir he compiled for the Veterans Health Administration in 2020, Steinkirchner recalled what life was like early in the 20th century.

"My mother was a homemaker, and my father worked in a mill for Jones and Laughlin. That was one of the biggest steel mills in Pittsburgh at that time," Steinkirchner wrote in his story. "I was about 5 or 6 years old when my father got injured. It was very, very sad."

"He got crushed somehow in a machine. He was sent to the hospital and it went downhill from there. In those days, they didn't take care of you. There was nothing. He deteriorated at St. Francis Hospital. He ended up in Mayview [State Hospital] for 15 years before he died. That was very hard on the family. We didn't have too much on account of my father being sick."

Steinkirchner, along with his older brother and younger sister, had to get a job to help make ends meet. He began working as a typist at Johns-Manville, an asbestos company, taking orders then running them across the street to the plant.

By 1935, Steinkirchner decided to test for acceptance into the Pittsburgh Bureau of Fire. He passed and started as a fireman first class, but what would turn out to be a long and illustrious career as a firefighter was soon interrupted by World War II.

He was drafted into the Army in 1942 and sent to Camp Bowie in Texas to join the 647th Tank Destroyer Battalion.

Steinkirchner was loath to leave behind Agnes Zaborowski, his next-door neighbor and girlfriend. But it wasn't for long.

"When I was in Texas, I got lonesome and I called Agnes and she came down on the next bus and we got married by a captain," he recalled. "We had a very good marriage. Agnes died in 2018. We were married for 76 years — 76 years of a love affair."

"My father was very mechanically-oriented," his son said. "He ended up as a tank, artillery and motor mechanic. He was behind the lines in a support role."

Steinkirchner came home in 1946 and resumed his career in the fire service, where he rose to the rank of battalion chief, then deputy chief.

Before he retired in the mid-1980s, Steinkirchner received a number of commendations for his bravery and life-saving actions, including once reviving a patient with a newfangled procedure called cardiopulmonary resuscitation.

"My father was kind of a Renaissance man. He learned CPR when it was on the forefront of development," his son said. "He was called to a residential fire, and on the way in, one of the firefighters said, 'We're going to get a body bag.'

“There was a lady laying on the floor, not breathing, and my father said, ‘Have you tried CPR?’ and they said, ‘What’s CPR?’ So, he tried CPR on this lady, and one of the police officers said, ‘This lady has a pulse!’ He was always very proud of that.”

A devout Catholic throughout his life, Steinkirchner often led religious retreats for his fellow firefighters at St. Paul of the Cross Monastery in the South Side.

Paul Steinkirchner said one of the things that few people knew about his father was his weekly visits to Pittsburgh and Florida hospitals to help buoy the spirits of lonesome patients.

"For 35 to 40 years, every Sunday, he would take a stack of Pittsburgh Catholics, and he would visit hospitals. He would offer patients a copy of the Pittsburgh Catholic or offer them a prayer," his son said. "You'd be surprised how lonely people are in the hospital. In the last five years, he probably gave out 10,000 to 15,000 [religious medals] with pamphlets. He was a very humble man, and he never took any credit for it. He always turned down interviews."

He might have outlived his many friends, but Steinkirchner survived long enough to enjoy not just his five grandchildren but also his six great-grandchildren, his son said.

"My father lived a great life, and he was a very happy man. His biggest problem was he lived longer than most of the people he knew," he said.

In addition to his wife, he was preceded in death by his siblings, Joseph and Bette.