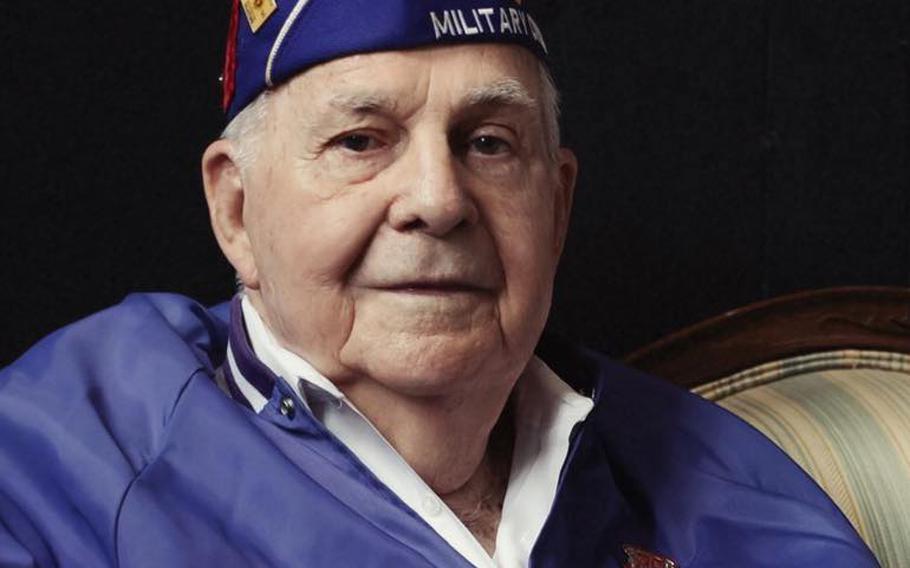 The man's legacy is not just his military service, but his decades of service for Southern Baptist Disaster Relief and the time he spent mentoring children and JROTC cadets, said retired Lt. Col. Michael Snyder, JROTC senior army instructor at Decatur High School and a close friend of Mills.

"If George Mills were to pick a day of the week where he would pass away, it would be a Sunday — a beautiful, sunny day like today with flowers and springtime and positivity blooming and glowing. He would choose a day like today," Snyder said Sunday.

"God honored his wishes in how he completed his mission here on Earth. Now he's celebrating in celestial places with loved ones and comrades and the King of Kings."

The funeral will be at 2 p.m. Thursday at Shelton Funeral Home. It will be preceded by visitation beginning at noon.

Mills, who would have turned 101 on May 23, was born in Spencer, Tenn., but moved to Decatur with his family as a young child. He graduated from Riverside High School, which later became Decatur High, in 1939 and enlisted in the U.S. Army in May 1942. He served in Company E, 109th Infantry, 28th Division and fought in the Battle of Normandy and Battle of the Bulge among other conflicts under the leadership of Gen. Omar Bradley.

In a 2019 interview with The Decatur Daily, Mills said his company was in a large house in Furhun, Luxembourg, near the German border, when on Dec. 17, 1944, the 17th Panzer Division of German tanks started fighting the 200-plus American infantrymen. He said the Allies were out-manned and running low on supplies.

The next night, shrapnel from a German bazooka came through an open window and hit Mills above his right eye. "They used a flame-thrower and the house started burning," he said. "We had about six rounds of ammo left, and the captain told us to surrender."

He said he waved a little white flag out of the door. Nazi soldiers then forced the men, with no food, on a five-month march to the Czechoslovakian border.

Mills said the prisoners stole sugar beets and rutabagas from farms along the way. "I lost 70 pounds," he said. "Many American soldiers didn't make it. They died of starvation or disease or from the cold."

American soldiers liberated Mills and the other survivors on April 13, 1945.

On that day, which would have been his 117th in captivity, Mills heard a noise in the distance that sounded like a tank. He and several other prisoners walked to a nearby winding, dirt road and peered through the woods.

Occasionally, a vehicle would come into sight rounding a curve and Mills could glimpse parts of it through the trees.

"We couldn't tell whether it was German or American until it turned where we could see the star on it," he said in a 2020 interview with The Daily.

By the time Mills returned to the main group of prisoners, the guards had been relieved of their weapons by their former captives.

Mills said he did not consider himself to be a hero.

"I was just one of 16 million who went over there to do a job," he said. "To get rid of a machine that was trying to corrupt the world. I know what those who sacrificed went through. They wanted to come home as bad as I did. They didn't get the chance."

'Committed to his country'

After leaving the service he met his wife, Charles "Charlie" McDoura. They were married 66 years before her death in 2015.

Mills worked for nearly 30 years as a piano salesman, most with Traylor Music Co. in Huntsville.

Former Decatur Mayor Lynn Fowler worked with Mills' wife at the phone company and met him through that connection. Fowler and George Mills also served in Kiwanis together.

Mills was a war hero and Decatur icon, Fowler said, "but handled it with humility and grace. He was a person you couldn't help but like the first time you met him. He was a friend, a gentleman. He loved his family. I just never met a man I respected anymore than I respected him."

Fowler said Mills — through his military service and his later community service — inspired others.

"He's the epitome of what an American should be like: a soldier, a hero, a gentleman, and somebody you could depend on every time to do what he said he was going to do," Fowler said.

Over the years Mills participated in numerous local organizations, including Rising Sun Masonic Lodge No. 29, Shriners, and American Legion Post 15. He was a founder of the Finis J. Self Chapter 2212 Military Order of the Purple Heart.

Mills for decades volunteered for Southern Baptist Disaster Relief as a head cook, preparing free meals for those displaced by hurricanes and tornadoes. He served meals to hundreds of people affected by Hurricane Katrina in Louisiana and Mississippi in 2005.

Bobby Joe Smith knew Mills for about 50 years and was by Mills' side for more than two decades on Southern Baptist Disaster Relief missions.

"He was the head cook. He did all the seasoning. We had about six or eight big vats (of stew) running and he was in charge of his vat plus he seasoned all of the stuff. He did a good job," Smith said. "He was just a great guy and a fine Christian fellow. I just loved the man. He was wonderful."

Snyder said he became especially close to Mills in the last decade. After Mills' wife died, Mills routinely had Sunday dinner at the Snyder home.

"He was a great American who loved God, loved people, loved his nation and loved his community," Snyder said. "He loved mentoring youth and recognizing their leadership potential. He would try to inspire them to love their country and be good citizens in their communities."

Mills was a featured guest at numerous awards programs, including at elementary schools, and Snyder said he always took the time to connect with the students.

"He (wanted them to) understand history and learn from it so they could do tomorrow's work without having to repeat it," Snyder said.

"He pinned awards on hundreds of cadets at the university and high school level. When he'd come visit cadets it was more than pinning on awards. He was sharing and talking with them. ... He gave freely of his time. He'd spend all day with them. His life has been an inspiration."

"He told me a story once," Snyder recalled. "They took a merchant marine ship going from the United States to England as part of the Allied force. The ship he was on, he saw it had been refurbished in Decatur, Alabama. He said he'd take all his mates down and say, 'This is a good ship.' He'd point to the plaque that was on the boiler room or wherever it was and say, 'Look, this is a good ship. It was refurbished in Ingalls Harbor.' He was very proud to be from Decatur."

Mills was hospitalized in early March after a fall. He was released from the hospital to NHC HealthCare in Moulton about two weeks ago, Snyder said, and died there.

"I describe him as the last true Southern gentlemen and one of Decatur's favorite sons," Snyder said.