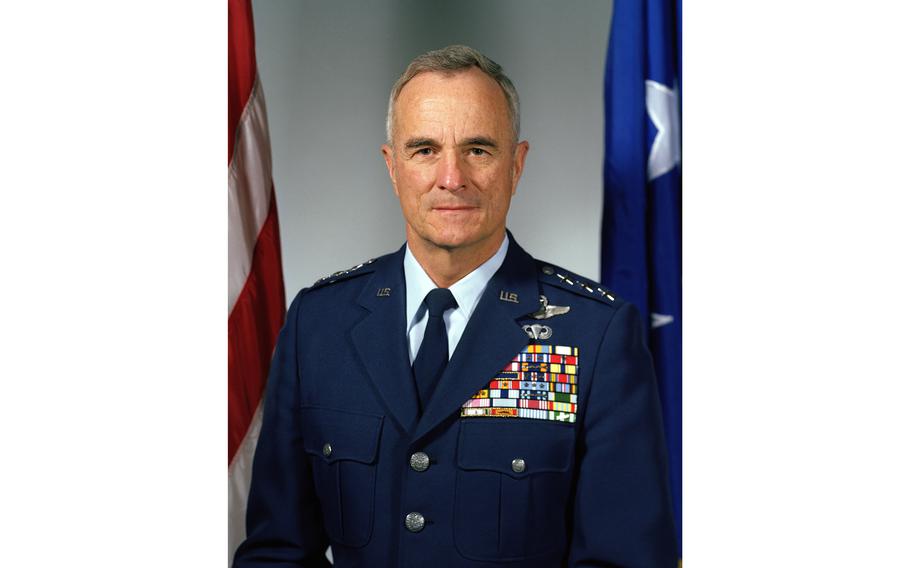 (Tribune News Service) — Lt. Gen. Winfield W. Scott Jr., who led the Air Force Academy as the 10th superintendent from 1983 to 1987, was laid to rest Tuesday at the academy's cemetery.

He died in Colorado Springs on March 19 at age 94.

In an event that was mostly off-limits to the media, his ceremony included a formation of cadets, a firing party, a bugler sounding taps, a folding of the U.S. flag and a missing-man formation of four F-35 aircraft from Hill Air Force Base in Utah, the academy said. An American flag was then presented to Scott's daughter, Kay, by the academy's superintendent, Lt. Gen. Richard Clark.

"I can't say enough about the character and humility of General Scott, a personal inspiration who directly impacted my life and career path. He was my superintendent, and when an injury put pilot training in doubt for me, he intervened to ensure that I could continue to follow my dream," Clark said in a statement. "That was the kind of person he was — a selfless leader who set an example I have tried to follow. He inspired so many and will be dearly missed."

Clark, the academy's first black superintendent, told The Gazette last year that Scott played a big role helping him get into pilot training despite having separated shoulders he suffered from playing football.

Scott flew F-51 Mustangs during the Korean War and piloted F-4s in more than 100 combat missions during the Vietnam War.

After learning Clark was selected for a pilot slot but medically denied, Scott invited him to his office, where he asked the soon-to-be second lieutenant to rotate each of his arms above his head.

"He said, 'Ya know Rich, I flew F-100s, I ejected out of an airplane and having a dislocated shoulder is the least of your worries. And if you can play football here and you can do what I just did (raise arms over head), that's about all you need to do to be able to reach up to a switch and pull your ejection handles. I'm gonna take this one up, and we're going to get you a pilot slot.'"

Born on Dec. 10, 1927, Scott graduated West Point in 1950, earned his pilot wings, served in the Korean and Vietnam wars and became the academy's 10th superintendent before retiring from active duty in 1987 after nearly four decades of military service.

"By all accounts, Gen. Scott is remembered as a highly engaged, hands-on leader. Militarily, he played a key role in expanding soaring opportunities, permitting more cadets to experience the thrill of flying," Lt. Col. (Ret.) Steven A. Simon said in an article on usafa.org. "Academically, he oversaw the implementation of a program to furnish all cadets with personal computers, providing connections with the faculty through the local area network. A football player at West Point, he avidly supported Falcon athletics, attending countless events and practices."

In a statement, his sons, who served in the Air Force, said this about their dad:

"There was not another person we know more devoted to his faith, his family and our nation through the United States Air Force than our father. Not a morning or evening went by that he was not praying with mom, even after she passed away, for our family. In the last few days since he went to heaven to be with mom, we have learned more from his friends, of all ages, all over the nation expressing their gratitude for his faith, his leadership and how he never wavered from his values. He had an influence and impact that will be with us for a very long time, if not forever. We will miss him but we also know, because of our faith, we will meet again."

Also known as Skip, Scott is survived by six children and 16 grandchildren; many of them served with the academy.

His wife, Sally, died in 2015 and is also buried at the academy's cemetery.