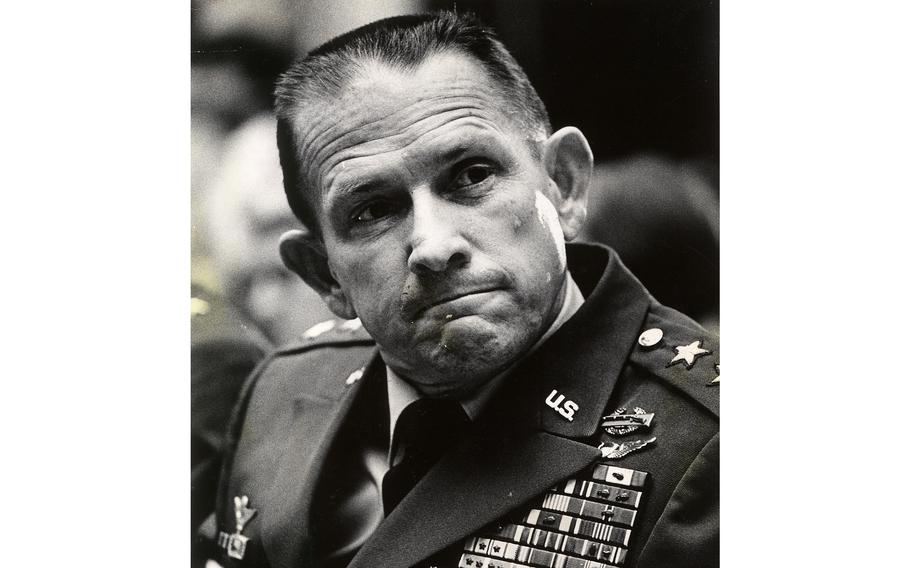 John Singlaub, a two-star general with a record of wartime derring-do who resigned from the Army in 1978 after openly criticizing President Jimmy Carter's defense policy, and who later battled communism as a private citizen by funneling weapons and money to rightist insurgents around the world, died Jan. 29 at his home in Franklin, Tenn. He was 100.

His daughter Mary Ann Singlaub confirmed the death but did not cite a cause.

To his admirers, Singlaub was the consummate warrior — a brawny, ramrod-straight man of action with the wounds and decorations to prove the truth of the lore that surrounded him. He rose to the rank of major general, and in the course of three wars, he became known as a stealthy commander with a knack for leading death-defying missions in mountains and jungles.

During World War II, he distinguished himself in the Office of Strategic Services (OSS), a precursor to the CIA, parachuting into German-occupied France and later into China to support anti-Japanese guerrilla forces. He also was the mastermind of a bluff that helped liberate nearly 400 Allied prisoners from a Japanese prison camp.

For the nascent CIA, he headed agency operations in postwar Manchuria, served as a high-level agency official in Korea during the Korean War and organized covert combat operations along the Ho Chi Minh Trail in Vietnam and in neighboring Laos during the Vietnam War.

Although revered by many military colleagues, he was largely unknown to the public until May 1977, when he was catapulted to the front page of The Washington Post. Serving at the time as chief of staff of U.S. forces in South Korea — the third-ranking Army official on the Korean Peninsula — he did something unusual, even shocking, for a military officer to do. He publicly disagreed with the president.

Carter made a campaign pledge the year before to bring home 32,000 U.S. ground troops stationed in the region over five years. Many officials in the diplomatic and defense establishment had called for more troops to reinforce South Korea's border with North Korea. They said the border was a vital line of defense against aggressive communist regimes in North Korea and China.

Singlaub, however, aired his objections in a particularly visible fashion, alarming the White House. He told a Post reporter that Carter's proposed retrenchment "will lead to war" as a previous drawdown of Allied forces had done in 1950.

Singlaub, who later said the interview had been off the record, was ordered to Washington for a meeting with Carter, after which the president said at a news conference that the general had committed "a very serious breach of the propriety that ought to exist among military officers after a policy has been made."

Carter, Singlaub liked to note, eventually discarded his plans to remove the troops.

The incident was reminiscent of President Harry Truman's showdown with Douglas MacArthur over the conduct of the Korean War. MacArthur was relieved of command, and he retired to New York.

Singlaub was reassigned to Army Forces Command at Fort McPherson, Ga., as chief of staff, but he continued on a collision course with Carter. He aired further policy differences with the president during a speech at Georgia Tech that hastened his retirement from the Army after 35 years of service.

He was lauded as a hero by conservative politicians such as Sen. Jesse Helms, R-N.C., and became a speaker on the far-right lecture circuit, lambasting Carter's cancellation of the B-1A bomber program.

Singlaub started the U.S. Council for World Freedom, an affiliate of the World Anti-Communist League. Later, as president of the international organization, he made what the Anti-Defamation League of B'nai B'rith called "substantial progress" in purging the group of neo-Nazis, anti-Semites and Latin American death-squad leaders.

"We had a Mexican chapter that was really kooky," he told The Post in 1986. "Blamed everything on the Jews. Even accused Pope John Paul of being a Jew. They were thrown out."

In addition, Singlaub was involved with the Western Goals Foundation, a private domestic intelligence group bankrolled by the archconservative Texas oil tycoon Nelson Bunker Hunt to gather information on leftist groups and their leaders.

Singlaub's chief function in what the Los Angeles Times called the business of "private-enterprise insurgency" was raising millions of dollars to supply arms to anti-communist irregulars in places such as Nicaragua, Angola, Afghanistan and Laos.

In the early 1980s, as Congress began curtailing U.S. funding of efforts to overthrow leftist regimes in Nicaragua and elsewhere, Singlaub and his organizations remained an important conduit of materiel and financial assistance, reportedly with the help of deep-pocketed conservatives and foreign governments.

He was often compared to Marine Lt. Col. Oliver North and other major figures in the Reagan administration's Iran-contra scandal. North was among the national security officials who had authorized illegal arms sales to Iran to win the release of U.S. hostages in the Middle East and used some of the profits to support right-wing Nicaraguan rebels known as the contras.

In his memoir, "Hazardous Duty" (1991), written with Malcolm McConnell, Singlaub reserved special contempt for North (a "gullible dupe") and the shady arms dealers who he said had inflated prices of inferior weapons and pocketed the difference. Their motive, he wrote, "had been profit, not patriotism."

Singlaub was never the subject of a criminal investigation. He spent six years and hundreds of thousands of dollars battling a lawsuit — filed by a leftist nonprofit group, the Christic Institute — that promoted conspiracy theories about him and dozens of others with ties to the contras. The lawsuit was resolved in his favor in 1992.

Meanwhile, he opened an office in the Philippines, intending to hunt, he said, for a treasure of gold bullion. He told the Los Angeles Times that his hope was to use the gold to finance anti-communist insurgencies in Southeast Asia. He abandoned the effort after local newspaper reports described the effort as a cover for mercenary training.

John Kirk Singlaub was born on his grandfather's homestead in what is now Independence, Calif., on July 10, 1921. During the summer, young Jack hiked with friends in the eastern Sierra Nevadas, and they tested their fortitude by finding out how many days they could march on what they carried in their rucksacks.

His father worked for the city of Los Angeles, and the Singlaubs eventually settled in the Sherman Oaks neighborhood.

Jack Singlaub, who said his ambition had always been to join the military, enrolled in an ROTC program at the University of California at Los Angeles. With America at war, he set aside his studies in 1943, just shy of graduation, to receive an Army commission as a second lieutenant.

Volunteering for hazardous duty, he joined the OSS and was placed in a three-man group that dropped into the mountainous Massif Central area in south-central France in August 1944.

Their mission was to help French Resistance fighters prepare for the Allied invasion of the occupied country's Mediterranean coast, launched about two months after the D-Day invasion of Normandy. (William Casey, the future CIA director, was his case officer. When Casey offered him cyanide pills for use in the event of capture, Singlaub recalled replying, "No, sir, I don't intend to get captured.")

At one point, in a fight against a German garrison, he was wounded in the face by sniper fire. He grabbed a Bren light machine gun and emptied two full magazines on the enemy nest, silencing it. "We didn't hear from that gun again," he said.

"It was not all bad," he later told the Warfare History Network, describing the action he saw in France. He said there were families, still living in castles, who would celebrate with the advancing Americans by uncorking fine wine or 50-year-old cognac that they had managed to hide from the Germans. "There was stress, strain, and pain, but you could survive."

With the Allied march to Berlin underway, Singlaub volunteered for service in the Pacific to help end the war there. His most intrepid undertaking of the war came on Aug. 27, 1945, after the Americans leveled Hiroshima and Nagasaki with atomic bombs but before the official Japanese surrender on Sept. 2.

It was feared that Allied prisoners of war would be executed en masse in retribution for the bombings, and Singlaub headed an eight-man rescue team sent to free American, Australian and Dutch POWs on Hainan Island in the South China Sea. After parachuting in, they were met at the guardhouse by bayonet-wielding Japanese soldiers who attempted to take them prisoner.

Singlaub was a captain at the time, but he had been advised by an OSS specialist on the Japanese military to pose as a major, the rank above his. With swagger that astonished the Japanese guards, he recalled, he ordered them to watch over the medical and food supplies his team had brought with it.

"There was a Japanese captain there, and I told him he didn't have enough rank to talk with me," Singlaub told the Warfare History Network. "He got on the telephone line and screamed to get connected to his colonel. We listened outside his door, and ... could hear the captain saying, 'But sir, they jumped in broad daylight, the major insists that Japan is surrendering — and he will talk only with you!' "

The next day, after the OSS crew spent an unnerving night in a hospital building, the colonel arrived, and Singlaub negotiated an agreement to provide food and medical attention to the emaciated POWs and arranged for their eventual evacuation.

On brief home leave earlier that year, he married Mary Osborne, with whom he had three children before divorcing. In 1992, he married Joan Lafferty.

In addition to his daughter Mary Ann, of Vienna, Va., and his wife, of Franklin, survivors include his other children, Lis D'Antoni of Davie, Fla., and John Singlaub of Zephyr Cove, Nev.; three stepdaughters, Jody Ball of Columbia, Tenn., Sara Guest of Arlington, Tenn., and Debra Satterfield of Franklin; nine grandchildren; and 11 great-grandchildren.

After the war, Singlaub was based at Mukden before the Manchurian city fell to Chinese Communists forces in 1948 and Americans were expelled. He escaped with his cocker spaniel on the last possible flight — "under artillery attack, passing a reconnaissance plane with a red star insignia, knowing this battle of the cold war was lost," author Tim Weiner wrote in his CIA history "Legacy of Ashes."

During the Korean War, Singlaub served as deputy chief of the CIA mission on the peninsula and later as an Army battalion commander, for which he received the Silver Star for valor in combat. He then joined the Command and General Staff College at Fort Leavenworth, Kan. He completed his UCLA degree in 1958, majoring in political science.

His other military decorations included the Distinguished Service Medal, the Legion of Merit, the Soldier's Medal, the Bronze Star Medal and the Purple Heart.

Nicknamed "Jumping Jack" Singlaub, he chaired the board of a forerunner to the U.S. Parachute Association and led the Army parachute team in international competitions. He was chairman of the OSS Society, a group that seeks to preserve the spy agency's legacy.

Decades after leaving the Army, he started wearing his dog tags again — a decision he made when he "returned to war," this time allied with the contras, and faced possible ambush, he wrote in his memoir.

"That would be one way to at least identify my body," he added. "Then I understood that the gesture was also symbolic of my commitment. Once I put those worn old steel tags back around my neck, I decided to keep them on until the war was over. I am still wearing them today."