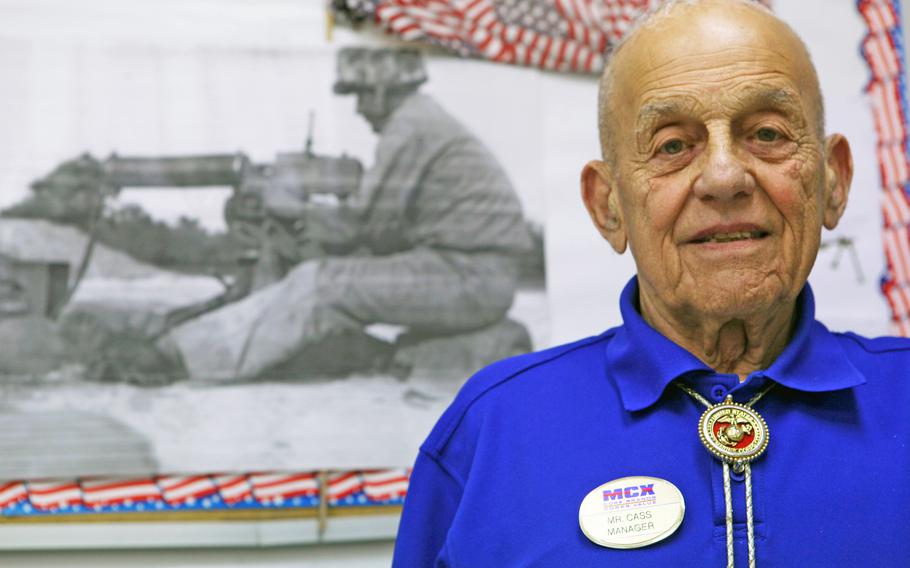 Retired Sgt. Maj. Marion P. Carcirieri, manager at the Marine Mart aboard Camp Geiger, stands in front of a photograph of himself during the Vietnam War in the Marine Mart staff office, Aug. 5. Carcirieri fought at the Battle of Okinawa, in the Korean War and in the Vietnam War during his 31-year Marine Corps career. Carcirieri’s brother also fought at the Battle of Okinawa on the other side of the island. “It was a really memorable experience for me.” (Justin Rodriguez/U.S. Marine Corps)

The retired sergeant major passed away earlier this month after more than seven decades of service.

A veteran of World War II, the Korean War and the Vietnam War, Carcirieri was wounded just once.

"It's a miracle I made it through all of them," Carcirieri told The Daily News in 2020 days before his 95th birthday.

Carcirieri managed several Marine Corps Exchange facilities across Camp Lejeune and Marine Corps Air Station New River, but he preferred being around the young Marines from the School of Infantry at the Camp Geiger Marine Mart, according to Robert Jones, retail director with MCCS Lejeune-New River.

"Mr. Cass loved nothing more than being close to the young Marines each and every day," Jones said.

Born in Maryland in 1925, Carcirieri was a farm laborer during the days of the depression. In March of 1944, he enlisted in the Marines and went on to participate in the Invasion of Okinawa, his obituary said.

In 1974, Carcirieri retired after serving as sergeant major at the Camp Lejeune Rifle Range, according to his obituary.

"He was a man of faith," his obituary said. "He was a devout Catholic and was a longtime member of Infant of Prague Catholic Church in Jacksonville."

"Mr. Cass's 76 years of service to his country is a rarity, and we are both fortunate and proud to have called him a member of our team," Wiltgen said. "His legacy will go on through the countless lives he influenced, and his dedication to serving the Marines of Camp Geiger will not be forgotten."

"He was a great leader and mentor to many MCCS employees throughout his 45-year career," Jones said. "We will miss him dearly."