Dennis Moore, Army veteran who represented Kansas in Congress for 12 years, dies at 75 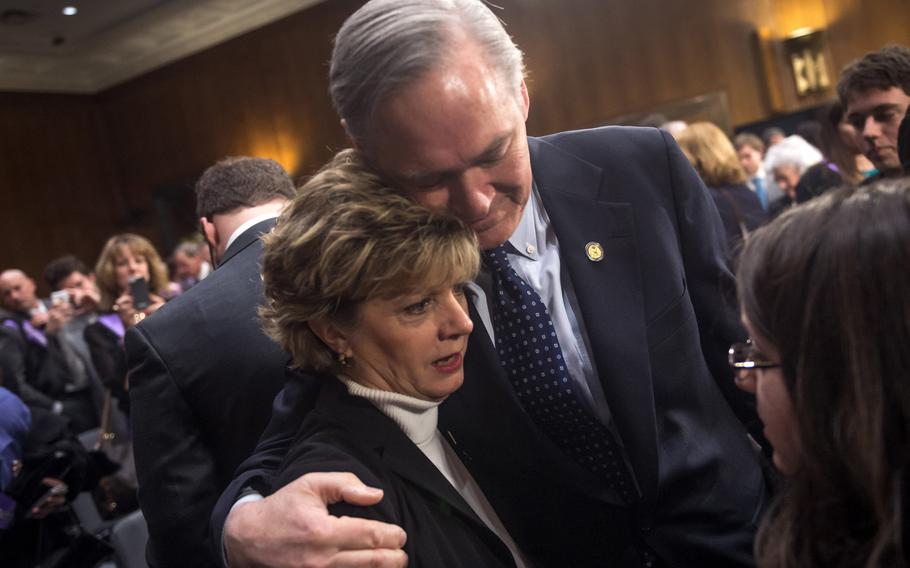 Former Rep. Dennis Moore (D-Kan.), who retired from the House of Representatives after being diagnosed with Alzheimer’s, hugs his wife, Stephene, after he testified at a hearing on “The Rising Cost of Alzheimer’s” on Capitol Hill on Wednesday, Feb. 26, 2014, in Washington, D.C. Moore died Tuesday at age 75. (J.M. Eddins Jr., MCT/TNS)

Moore's wife, Stephene, announced the death. She said the former congressman and Army veteran had cancer. Moore had also had Alzheimer's for more than a decade.

Voters first elected Moore to the U.S. House in 1998, when he defeated incumbent Republican Rep. Vince Snowbarger. The victory ended 37 years of GOP representation in the district, which has traditionally encompassed the Kansas side of the Kansas City metro.

Moore served six terms in the House before deciding against running for reelection in 2010. Stephene ran instead, but was defeated by Republican Kevin Yoder.

Moore was diagnosed with Alzheimer's disease in June of 2011 after he noticed he was having difficulties remembering random events and trouble managing household finances. He became an Alzheimer's advocate and testified before Congress in 2014 to push for increased federal funding for Alzheimer's research.

"While Dennis endured the effects of Alzheimer's disease, he remained happy, gracious, dignified and with a constant sense of humor for which he was known," Stephene said in a statement. "He stayed in touch with family and friends by phone calls and welcomed their visits. We were fortunate to experience all of Dennis' amazing, fun and big personality, which will stay within our hearts and for which we are forever grateful."

Stephene said some of Moore's proudest legislative accomplishments included passing a law requiring the federal government to pay for the return flights home of active-duty members of the military, as well as increasing the death benefit for the families of fallen members of the military from $12,000 to $100,000.

"I am very saddened to hear of the passing of Dennis Moore, and my heart goes out to Stephene and his family. Dennis was a dedicated, gracious, and principled leader who will be remembered for his service to the Third District and the state of Kansas," Rep. Sharice Davids, a Democrat who currently represents the 3rd District, said in a statement.

Davids recalled how the first time she met Moore in person, she had been carrying a pocket-sized U.S. Constitution that she had kept with her throughout law school. The constitution had the official label of the Office of Congressman Dennis Moore.

"After a good laugh about how on Earth I had managed to hold on to it all those years, he offered to sign my copy and gave me advice on my campaign. For his humor, his thoughtfulness, his dedication to public service (and his guitar playing skills): he will be missed," Davids said.

Former Sen. Pat Roberts, a Kansas Republican who served alongside Moore, fondly remembered the Kansas Democrat's bipartisanship and his showmanship. When the two lawmakers would appear together for road dedications and ribbon cuttings, Moore would bring his guitar to perform "God Bless America" and "Home on the Range" with Roberts.

"He'd come in with a smile on his face and it was just a schtick that we had. He would play the guitar and we would sing together showing great bipartisanship. ... I think my staff didn't care for it very much, but I always got a big kick out of it," Roberts said.

"If you look at Dennis' political career he was always dedicated to civility and decency and fair play and he also didn't let himself get knocked off into either ideological dig. He always kept his finger on the pulse of the district," Bauleke said.

Moore was born Nov. 8, 1945, in Anthony, a small town in Harper's County, southwest of Wichita. He attended Wichita Southeast High School and graduated from the University of Kansas in 1967 and received his law degree from Washburn University in 1970.

Moore was a captain in the Military Intelligence Corps and the United States Army Reserve. In 1971, he became an assistant state attorney general and was elected Johnson County district attorney in 1977, a position he held until 1989. Throughout the 1990s, he sat on the board of trustees of Johnson County Community College.

As a prosecutor, Moore often focused on violent crimes against women and children. He helped establish SafeHome, a nonprofit organization and domestic violence shelter.

When he ran for Congress in 1998, the 3rd district had a decidedly Republican bent. Not since 1959 had voters sent a Democrat to Washington. But Snowbarger, his opponent, was seen by many voters as too conservative in a district that at the time favored moderate Republicans.

In Congress, Moore was a "Blue Dog" Democrat — a group of lawmakers known for their centrist views who emphasized bipartisan cooperation during a less-polarized era in Washington. His service spanned several momentous occasions, including Sept. 11, the wars in Afghanistan and Iraq, the election of Barack Obama as the first Black president and the financial crisis.

Moore, along with every other Kansas representative, voted in favor of a resolution authorizing the use of force in Iraq. But by 2006, he had written to President George W. Bush, calling for private discussions about when to pull troops out of the country.

In his last election, in 2008, he defeated Republican Nick Jordan, 56% to 40%. Two years later, he bowed out and Stephene ran instead. She lost to Republican Kevin Yoder as a national wave of conservative anger encapsulated by the Tea Party movement swept GOP candidates into office across the country and restored Republican control of the House.

Out of office and diagnosed with Alzheimer's, Moore became an advocate for more funding and research focused on the disease.

"An epidemic is upon us and too many families are in situations like mine, facing a fatal disease that currently has no way to prevent, cure or even slow its progression," Moore said at a 2014 hearing. "As a nation we cannot afford to wait until Alzheimer's bankrupts us. We must make the smart investment now to realize a better, healthier future for our families and for our country."

Sen. Jerry Moran, a Republican, said his respect for Moore only grew as he watched how he and Stephene confronted his Alzheimer's with a determination to help others. "His legacy will be the way in which he gave others battling Alzheimer's courage and hope," Moran said.

Moore died at Prairie Elder Care in Overland Park, Kan., where he had been living for the past three years.