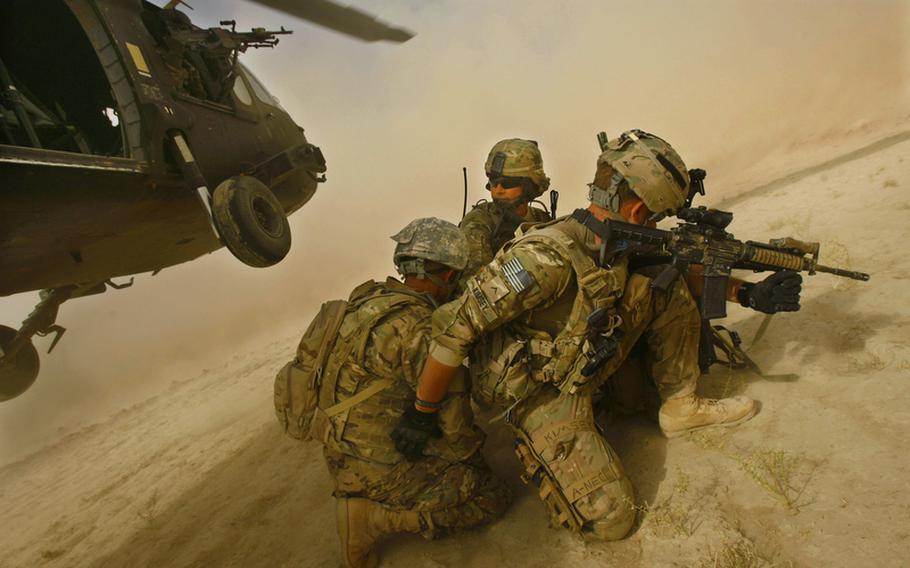 WASHINGTON — A pair of House lawmakers introduced a bill on Thursday that would expedite the visa process for Afghan military translators, amid growing calls from Congress for the Biden administration to act quickly to shuttle allies out of the country ahead of the withdrawal of U.S. forces.

The bill from Reps. Jason Crow, D-Colo., and Brad Wenstrup, R-Ohio, would allow applicants to the Afghan Special Immigrant Visa program to forgo a medical examination, which can cost thousands of dollars.

“The U.S. must honor our promises and protect our Afghan partners whose lives are now at risk by the Taliban,” said Crow, a former Army Ranger who served in Iraq and Afghanistan. “We can help expedite the SIV process by waiving the medical examination requirement in Afghanistan, which is cost prohibitive and difficult for many applicants to safely receive.”

Crow, along with several other lawmakers, expressed frustration last week at a House Armed Services Committee hearing after defense officials testified they lack a clear plan to provide safety for thousands of Afghans whose visa applications remain stalled due to bureaucratic inefficiencies.

The State Department-run Special Immigrant Visa program has been plagued by delays since it was created in 2009 to provide a pathway for Afghan interpreters, contractors, and other personnel to safely reach the U.S. and eventually gain citizenship.

The legislation, titled the “Honoring Our Promises through Expedition for Afghan SIVs Act of 2021,” aims to remove one bureaucratic hurdle that some applicants face in completing a medical exam.

One facility in Kabul, Afghanistan’s capital, conducts all immigrant visa examinations for the country, which forces some people who live outside the city to travel there under dangerous circumstances, the lawmakers said.

“In many cases, it’s untenable for them to remain in their home country due to active death threats for helping America, and our interpreters and other local allies are in mortal danger,” Wenstrup said.

David Helvey, acting assistant defense secretary for the Indo-Pacific region, said Thursday at a Senate Armed Services Committee hearing that the Pentagon is working with the State Department to look at how to improve the program.

“That program in and of itself is limited. We'd like to be able to work with Congress to be able to increase the quotas and the resources for Special Immigrant Visas,” Helvey said.

At the House hearing last week, Rep. Michael Waltz, R-Fla., a former Army Green Beret who served multiple deployments in Afghanistan, called for these Afghans to be evacuated out immediately.

A group of 20 senators, including Sen. Jack Reed, D-R.I., chairman of the Senate Armed Services Committee, wrote a letter Tuesday to President Joe Biden urging him to authorize at least 20,000 additional visas for fiscal year 2022 “to begin to account for the individuals who are at risk of retaliation for their work in support of the U.S. mission in Afghanistan.”

The senators also asked Biden to review an evacuation plan for SIV applicants who have pending applications “who may face extreme danger in Afghanistan until the adjudication of their applications.”

Biden has been quiet on the issue so far, but Bloomberg reported recently that the White House plans to present options to advocates and members of Congress soon, including a mass evacuation where applicants can be processed in a safe location.