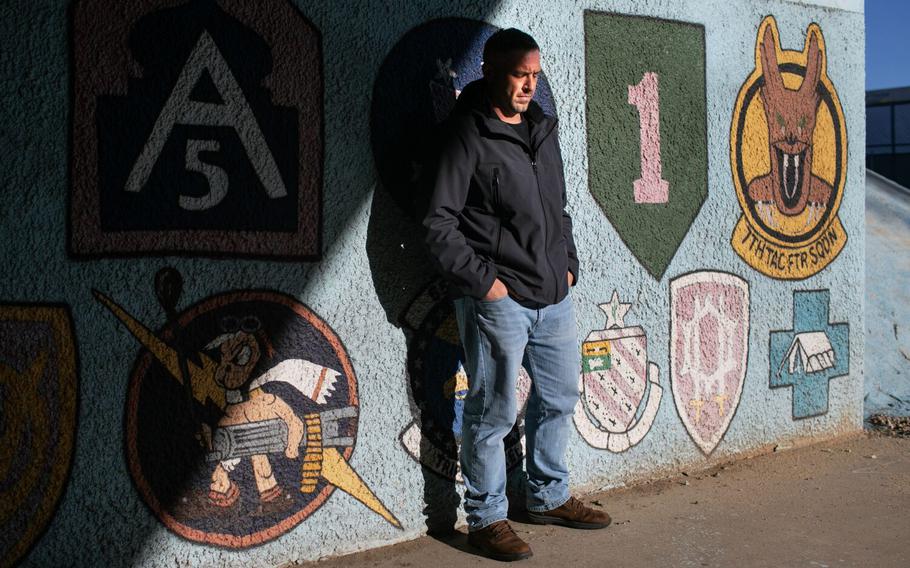 Rob Reynolds, an Army veteran, poses for a portrait by the veterans mural at Wilshire Boulevard and Bonsall Avenue near the VA Hospital in West L.A. on Tuesday, Jan. 17, 2023, in Los Angeles. (Jason Armond, Los Angeles Times/TNS)

(Tribune News Service) — His art has portrayed the history of jazz, America's culture of violence and the depravities of war.

It was the last theme — in particular side-by-side images of an American soldier and a suicide bomber titled "Hero" and "Hero 2" — that has put a target on Sandow Birk's commission to create a monumental mural on the West Los Angeles land dedicated to veterans of America's wars.

Aroused by artistic expression they found disrespectful, veterans groups are demanding that Birk be replaced with an artist who has served in the military and will produce a mural on veteran themes for the project to adorn the Metro station under construction on the VA campus.

"When people step off the train, they should look up and see a mural that tells the 135-year history of the soldier home property," said Rob Reynolds of Amvets Post 2. "It's very special land. Veterans from every conflict since the Civil War have lived there."

Birk, known for lively and richly-detailed large-scale mosaics of blue and white tiles, was one of 17 artists selected by Metro last spring to create works at four Westside stations on the Purple Line Extension. His work will cover an 11-foot by 156-foot wall in the concourse level of the VA station. Previews of his design show a panoramic view of Los Angeles from prehistory to the present.

The panel that selected the artists was heavy with Westside arts institutions such as the UCLA School of Art and Architecture, the Hammer Museum in Westwood and the Beverly Hills Arts and Culture Commission and included only one veteran, artist Michael Amescua.

The veterans' groups, which have long battled the Department of Veterans Affairs over use of the 388-acre campus, are calling Metro tone-deaf for not consulting them on either the selection of the artist or his vision for such a symbolically fraught location.

"Just the fact that he was considered for this work shows how brain dead the people are who are running this show," said Diego Garcia of the ad hoc coalition called the National Home for Disabled Volunteer Soldiers, the name long associated with the land granted to the U.S. government in 1887 for use by veterans.

The commission pushed the issue to its next regular meeting on Wednesday to give Metro a chance to respond.

Officials in Metro's art program said they will make a strong case that they have engaged veterans in planning for the station. Artists commissioned for two of the four works have met with veterans groups, gone on field trips and incorporated work by veterans in their designs, they said.

There was little veteran involvement, though, in Birk's proposal. His required community consultation consisted of an urban sketching tour and an interview with the Brentwood Arts Center on Zoom.

In that interview, he previewed his concept for the wall as a panoramic vision of Los Angeles from prehistory to the present, including dinosaurs, scenes from early ranch life and vintage vehicles, but only three references to the veterans' campus, the historic Wadsworth chapel, a barbershop and a memorial pedestal.

In a nod to the need for a military component, he suggested images of vessels, not people—a dirigible, a battleship and a submarine named Los Angeles.

In his application to Metro, Birk presented his large-scale public art, not the gallery works that included the depravities of war series. But the veterans found it, only one Google click away, as they said. After they spoke up, the title "Hero 2" disappeared under the suicide bomber's image on Birk's website.

Ill feeling over the mural was aggravated by the VA's history of leasing portions of the land to non-veteran uses including a UCLA baseball stadium and the athletic field of nearby Brentwood School. In a 2015 settlement of a lawsuit filed by veterans groups, the VA agreed to build thousands of units of housing and ensure that the stadium and athletic field are used primarily for veterans. But a new lawsuit pending in federal court alleges that the VA has failed to meet its promises.

"The VA has failed even to consult veterans about plans to construct, and recently expand, UCLA's state-of-the-art baseball facilities on land where the VA is required to build Permanent Supportive Housing," the lawsuit said.

Veterans also say the decision to place the station on the VA campus, less than a mile west of a station in the heart of Westwood, caught them by surprise when they saw construction beginning in 2019.

"Everybody found out last minute," Reynolds said. "Back in 2019. I remember a bunch getting up in arms — the VA cutting down trees. They found out the Metro station was coming."

They were further aggravated by Metro's plan to take out a portion of a mural by the late Navy veteran Peter Stewart that is revered as a national monument to Vietnam veterans. Though most of the 23,000 square-foot mural will be spared, including dozens of unit insignia on a Wilshire Boulevard underpass, portraits of service members on a 115-foot offramp from the boulevard will be removed.

To compensate, Metro has commissioned the L.A. art group Piece by Piece to consult with veterans on a mosaic that will be installed on the facing wall.

Some veterans even consider the station a transgression.

"We demand that the terminal not be public and only be used for the veterans and their families," Francisco Juarez of NHDVS told the commission, acknowledging that it is too late to block its construction. Juarez said he sees the project as another intrusion on the use of the land for veterans' housing.

But Anthony Allman, the outgoing chairman of the county military and veterans commission, said he thinks the station will benefit both veterans traveling to use the VA Hospital and a growing community of veteran residents as housing is added in the years ahead.

"I think Metro's presence on campus is a terrific thing," Allman said in an interview. "That is going to improve their quality of life. You want to go downtown for an event? Take the train."

Allman is executive director of Vets Advocacy, a nonprofit created to support the redevelopment of the West Los Angeles campus ordered in the settlement of a 2011 lawsuit.

Like other veterans, though, Allman thinks Metro blundered in framing the station as the Westwood/VA Hospital stop. Veterans don't consider the campus part of Westwood, he said, and the name should include the historic name of the property, the Pacific Branch.

The VA, he said, in recent history viewed the campus as the center of healthcare operations.

"We've been trying to restore it as a home for veterans," he said. "That's why the naming is significant."

Metro officials said it's not too late to recast the name, which is only a placeholder used for planning. A formal name will be chosen later, after a six-month outreach. The final name must meet several criteria, including brevity and relevance to passengers.

"It's clear the name of the station is influencing the artwork," Allman said. "By fixing the name, we have an opportunity to refocus the art on the history of the property, not what is going on around it."

Metro officials are not so sure of that. Even though the station is not scheduled to open until 2027, the artists "are working on getting their designs to a point where they're ready to be shared with the public, which we anticipate to be pretty soon, " said Clare Haggarty, arts and community enrichment manager for Metro.

Allman said the commission will hear Metro out, then consider whether to make a recommendation to the Board of Supervisors. It would only be advisory, and the supervisors cannot dictate to Metro.

Allman said he won't be voting to oppose Birk, whose large-scale mosaics in the blue and white Portuguese style he admires.

His hope is to have the commission revised to require veteran participation, possibly by bringing on veteran apprentices.

"I don't think we can just say cancel the artist," he said. "We can work through this."