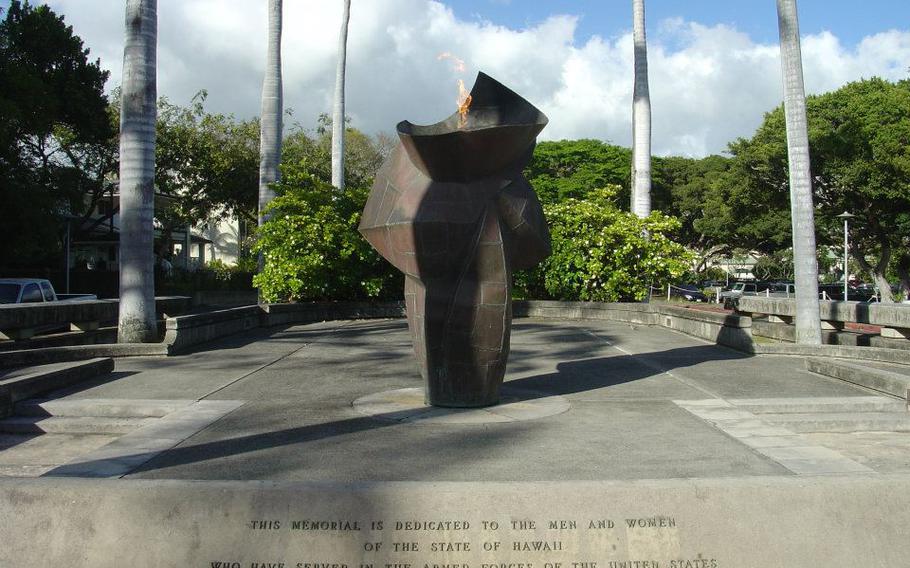 The Eternal Flame War Memorial was erected to honor Hawaii residents who have served in the armed forces. (Facebook)

(Tribune News Service) — The Eternal Flame War Memorial, which was erected to honor Hawaii residents who have served in the armed forces, is burning once again after being snuffed out for weeks.

Vietnam veterans noticed the flame had been extinguished when they met on the state Capitol grounds at the Korea and Vietnam War Memorials on Dec. 23 to usher in Christmas Eve as part of an annual holiday gathering for vets.

The state Department of Accounting and General Serv­ices maintains the Hawaii State Capitol district, which includes the Eternal Flame War Memorial, situated opposite the Capitol building on the mauka side of Beretania Street.

“Recently, vandalism damaged the burner and caused the flame to go out,“ state Comptroller Keith Regan said in a written statement issued Friday. “The Eternal Flame has since been repaired.”

A long-standing tradition, the veterans’ gathering was sidelined by the pandemic for two years before starting again in December. As part of the tradition, participants light candles with the Eternal Flame to observe the holiday and remember lost comrades.

A DAGS spokesperson said trash tossed into the memorial had caused the damage to the burner.

“We sincerely apologize to our veterans, their families and the public for the delay in repair,“ Regan said. “We have a deep appreciation for our veterans and are committed to maintaining our monuments that honor them. We would like to thank the team at Hawaii Gas for their assistance in expediting the completion of the repair. Moving forward, our team is working with law enforcement to increase monitoring of our memorials.”

In an effort to maintain the Eternal Flame, the state agency is procuring an additional replacement burner to “ensure future repairs are completed quickly,“ Regan said in the statement.

Designed by Kauai-born sculptor Bumpei Akaji, the flame memorial was dedicated in October 1972. The flame is intended to burn as a tribute to all men and women of Hawaii who have served in the armed forces over the years. People from Hawaii have served in the U.S. military since as early as the War of 1812 and have continued to serve overseas in ongoing U.S. military operations around the globe.

Allen Hoe, one of the organizers of the veterans’ holiday gathering, said, “I’m grateful that they followed up.” He added, “Hopefully, they’ll be a little bit more observant as to what’s happening over there.”