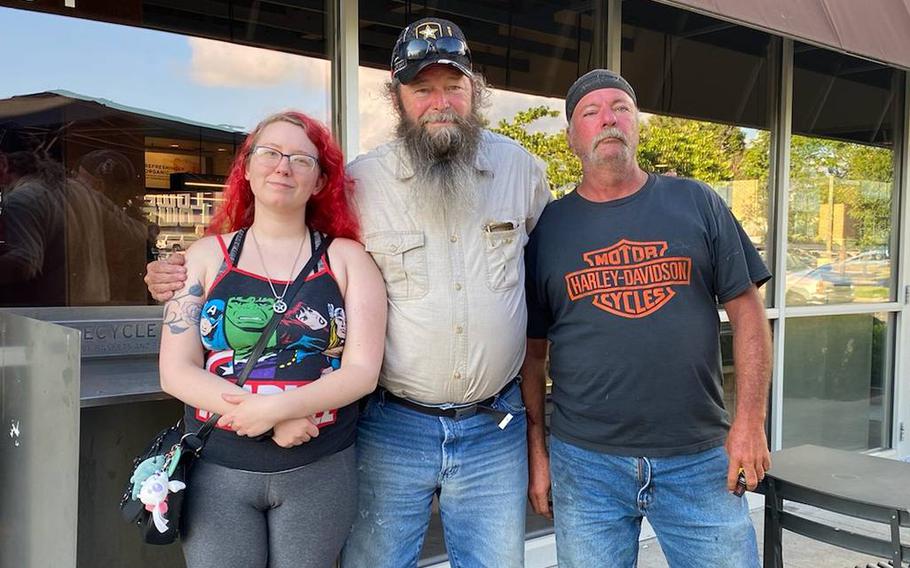 Kansas veteran Mel Gray, 61, (center) recently found his granddaughter Ophelia Moles (left) and a brother, Tom Davis (right), using an at-home DNA test during a search for the daughter he was forced to give up for adoption in the 1970s. (Courtesy photo/MyHeritage.com)

(Tribune News Service) — When Melvin “Mel” Gray walked into the home of his brother, Tom Davis, he felt an instant connection.

The men, both military veterans, have spent their lives in Kansas City, growing up and buying homes mere city blocks from one another. They hung out at the same fast-food restaurants, rode motorcycles in the same charity events, dressed and acted similarly, but never met — never even knew one another existed.

“If you took a rock and had a pretty good arm on you and you threw it from my front porch due east, it would land on his front porch,” Gray, 61, a facilities maintenance technician, said with a laugh.

Gray’s wife, a teacher who worked summer and winter breaks at a local grocery store, even routinely chatted with Davis in her checkout line, never making the connection that he and her husband were brothers.

But an at-home DNA test Gray took in 2018 helped the brothers discover their kinship. They met at Davis’ home for the first time over a televised Kansas City Chiefs game — forging a connection they said they’re excited to continue nurturing in 2023.

“We’ve been in touch with each other now pretty much every day or every other day since we found out we were brothers,” Gray said, adding that he and Davis get together every Sunday for dinners, camp outs and to watch sports games.

“When he walked in the door, I could just tell. It was no mistake that he was my brother,” said Davis, a 56-year-old semitruck driver who found out about his genetic link to Gray in a Facebook message he initially overlooked.

“I was completely in shock when I found that I had a brother that I had never known about,” he said.

“That we were that close all that time and did not know about each other, it’s just mind boggling,” Gray said.

Finding a brother was a complete surprise for Gray because it wasn’t what started his DNA journey.

What brought him to that point began with heartbreak decades ago.

For years, he said, he regretted the adoption of his first child, a daughter. It was a decision Gray says he and his then-girlfriend were forced to make after they conceived her as teens in the late 1970s.

He wanted to marry his girlfriend and raise the baby and enlisted in the U.S. Army at 17 to earn a paycheck he thought might support a family, he said.

But he never saw his daughter. After she was born, she was immediately adopted out through a religious organization. And he was forced to break all ties with his girlfriend, he said.

Gray thought of his daughter often over the years and even placed a detailed personal letter in her adoption file explaining what had happened, hoping she would search for him when she turned 18.

He created and maintained profiles on social media sites over the years, he said, “so that she could easily find me if she went looking for me.”

He never heard from her.

But in his quest to track her down, he submitted an at-home DNA test after seeing an advertisement that family history site MyHeritage.com was offering free to adoptees looking for their families. Gray, too, had been adopted as a child by his maternal grandmother, but he knew nothing about his dad.

After submitting the free DNA test, Gray found relatives on his biological father’s side, including Davis.

“The similarities and how close we were in the same proximity to each other all those years, just made the hair on the back of my neck stand up,” said Gray, who served in the Army in the 1980s then the Air Force during Operations Desert Shield and Desert Storm and later joined the Army National Guard, completing multiple deployments in Iraq, after the Sept. 11, 2001, terrorist attacks.

“We’re sure we’d met each other at some time or another growing up and just never knew,” said Davis, who served in the Navy in the late 1980s to 1990.

“Finding that you have family out there after you’re 50 years old is really kind of crazy,” he said.

Gray found another surprise connection after taking the DNA test: the child of the daughter he’d given up for adoption so many years ago.

After seeing Ophelia Moles’ photos, “there was no doubt in my mind that she was my granddaughter,” Gray said.

Moles, who lives in Independence, Mo., but grew up in Blue Springs where her mother’s adoptive family lived, had also taken a MyHeritage.com DNA test to find family.

At first she was a little leery about making the connections but wanted to find her mother’s biological parents, in part so she could tell them that her mother had died in 2011, the week before her 33rd birthday, she said.

Moles, 25, also had hoped to find her own biological father and his relatives, whom she didn’t know growing up but eventually discovered were living in the Wichita area, when she took the test, she said.

“I had grown up with my mother being the only person that I knew I was blood related to,” Moles said.

“From the get go I had wanted to learn about both” because when her mother died, “any information that I would have had on any of that died with her,” she said.

Hopeful for a connection, Gray met Moles at a cafe in downtown Kansas City, where she shared information, photos and stories about the daughter, named Angela by her adoptive family, that he had searched for for 44 years but never had a chance to meet.

Among the photos was a snapshot of Angela in a white Navy uniform.

Knowing that she, too, served in the U.S. armed forces, made him feel proud, he said.

For Gray, who went on to marry and have three other children after Angela, finding the family members he never knew made his life “more whole.”

“Now I have that connection that I had lost,” he said. “It truly, truly has changed my life for the better.”

“I’m really excited to spend more time with him (Gray) and the family and maybe get to meet more family who I have not met yet,” he said.

For Moles, who says she has spent her life struggling to connect, a switch flipped on when she met Gray.

“And then I made eye contact with Melvin Gray, and I suddenly was like, ‘Oh. There’s that recognition again.’”