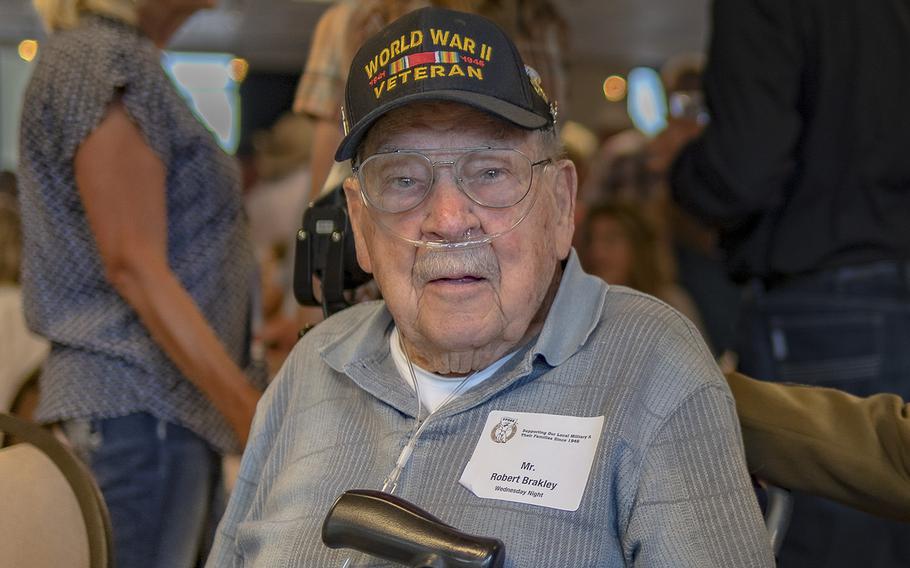 Brakley sat at a place of honor in the reception room as a steady stream of people filed through, eager to shake his hand, wish him well, or simply be in his presence.

While he clearly enjoyed the adulation, Brakley said he doesn’t feel especially heroic.

“We all did what we had to do for the country,” he said.

“He doesn’t want to be called a hero, but he is,” Quigley said. “They were all heroes.”

Brakley was working as a professional welder when he was drafted into the Army in 1943. He initially took and passed a pilot’s exam for the Army Air Corps, but was later shipped to Omaha, Neb., for welding school.

“Welding school,” he said, rolling his eyes. “I was already a certified welder, and they sent me to welding school.”

While he was there, the Army Air Corps contacted Brakley and told him he’d passed his pilot exams and could either transfer or remain in the regular Army. He chose the Air Corps and was sent to Michigan for pilot training.

“There was nothing but snow the whole time I was there,” Brakley recalled.

From Michigan, he was sent to Santa Ana Army Air Base in California. But shortly after he arrived, the tide of the war shifted, and so did the needs of the military. The fighting in Europe had ended. So Brakley was sent back to the Army, with the 625th Ordnance Battalion, and shipped to Okinawa, Japan.

Brakley and his battalion arrived in Okinawa on June 6, 1944 — otherwise known as D-Day.

About four months after the U.S. dropped the atomic bomb, Brakley was sent home for discharge. But because of his training with the Air Corps, he could have stayed on as a military aviator. Brakley politely declined.

Brakley went on to work as a bus driver and welder in his home state of Indiana. He volunteered with the police and fire departments in Highland, Ind., before becoming a full-time police officer, eventually becoming chief of police. He retired from the force in 1976 but continued to work various jobs until he was 88, according to his family.

Quigley said the men of the women of Brakley’s generation represent the best of American values.

“They did what they needed to do when their country asked, even though they didn’t really want to,” he said. “They’re a rare breed of people, and we’re running out of them. There are very few of them left.”

At the party, the Pikes Peak Sergeants Major Association presented Brakley with a challenge coin from the 4th Infantry Division, a citation honoring his service to the country, and an honorary promotion to sergeant major — the U.S. Army’s highest enlisted rank.

“Less than 1% of the people who enter the Army achieve this rank,” said Vice President Chet Miller. “But it is truly an honor to give it to you today.”

Despite a respiratory issue that requires him to use an oxygen tank, Brakley said he feels “pretty good” most days. His energy levels are fine, he’s in good enough shape to play an occasional round of golf, and his mental acuity remains sharp, family members said.

“His memory is better than mine,” Quigley said.

The centenarian and war veteran expressed gratitude, and surprise, at his longevity.

“I never thought I’d live this long,” Brakley said, laughing. “I figured I would have been hit by a car or something by now.”

Visit The Gazette at www.gazette.com