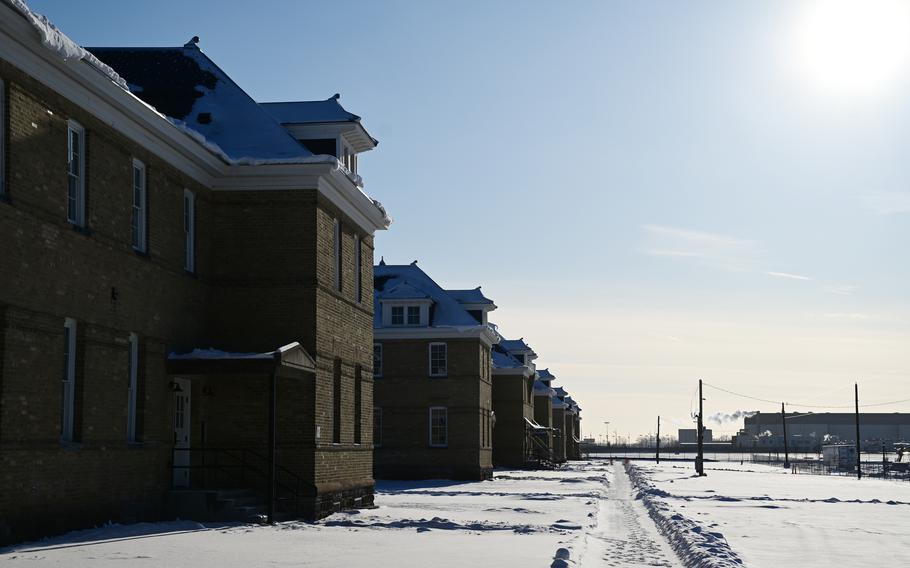 A row of former Army barracks are being refurbished into apartments at the Upper Post Flats development at Fort Snelling on Tuesday, Dec. 20, 2022. The development offers a variety of housing units built from the former military buildings of Fort Snelling, with preference given to active and retired military members, veterans, first responders and VA employees. (John Autey, Pioneer Press/TNS)

Plymouth-based housing developer Dominium has been working for seven years to preserve 192 units in 26 historic buildings, which were abandoned and maintained by the state since 1971. Previously, Upper Post housed Buffalo Soldiers — all-Black regiments for the U.S. Army — and a Japanese intelligence and language school during World War II.

While supporters point to the value of historic preservation and providing housing in the Twin Cities, the project has drawn criticism for its high development costs and public subsidies.

While 106 of the units at the Upper Post Flats still are under construction, the other 86 units became available to rent this fall, and one-quarter are currently under lease. The units are reserved for those making no more than 60 percent of the area median income, which is about $49,000, or $70,380 for a four-person household. Rent starts around $1,100 per month for a studio and $1,700 for a three-bedroom unit.

The units range from studios to five bedrooms, with the majority having two bedrooms or more to serve families, according to Owen Metz, Dominium senior vice president and project partner. He said a couple of buildings have been developed into single-family homes, and there are opportunities to build duplexes.

“There’s really not an apartment community like this probably anywhere in the state as far as how spread out it is, how much natural beauty there is,” Metz said. “You’re connected to all the trails along the Mississippi River; you’ve got all the ball fields and the soccer fields nearby. You share a fence line with the airport, but that’s OK. It’s kind of interesting for people to see planes take off and land.”

Preserving an important piece of Minnesota history and providing affordable housing to those in need justified the high cost, according to Hennepin County District 5 Commissioner Debbie Goettel.

“I know people really got upset seeing how much it costs per unit,” said Goettel, who voted to provide Dominium $88 million in bonds for the project in 2020. “But they did use the historic tax credits for historical restoration. And if you didn’t use it there, where would you use it?”

Before becoming a county commissioner in 2017, Goettel served as Richfield’s mayor for 10 years, during which she said she tried several times to find a housing provider that could take on the responsibility and high cost to redevelop the site.

“Thinking about what it was, a place of military installation to house our troops through different times, but then now it’s come full circle to serving some of those vets as well as other families,” said Goettel. “I think it’s wonderful we were able to preserve it rather than mow it down.”

Goettel said she’s been discussing with Dominium the possibility of adding informational materials, such as plaques and wayfinding tools, to educate people about the site’s history.

Metz said that given the buildings’ history, “it just felt right” to prioritize renters with military backgrounds, emphasizing the development as a housing option for people who may be transitioning out of homelessness.

Iyana Rice, an Air Force veteran who served from 1996 to 2008 and continues to work with service members, moved into the Upper Post Flats in November. She’s excited about living in a community of people with military and service experience.

“Everyone kind of has that general understanding; it’s like a bond,” said Rice. “One of the coolest things is that every day at 4 p.m., you can hear the national anthem.”

Having moved from downtown Minneapolis, Rice finds the units “extremely reasonable” in price.

However, Katherine Banbury, tenant organizer for the renter support organization HOME Line, said the rent is out of reach for many who would benefit from affordable housing, especially people of color.

“It’s going to be the same old, same old,” said Banbury. “Who can afford that? I’m worried that people that this is supposedly for are not going to be able to get in.”

Dominium received five veteran housing vouchers for people who make less than 30 percent of area median income, and Goettel said more may be on the way to boost the development’s affordability.

Banbury said even people who can afford the base rent likely will face unpredictable rent increases and hidden fees, which she said has driven residents out of Dominium’s Cambric senior apartments in St. Paul’s Dayton’s Bluff neighborhood, where she’s lived since 2018.

“They’re gonna get through the revolving door out because they won’t be able to afford it after a year or two of these rent increases,” said Banbury.

“Our rents are significantly below market and continue to be a great value for our residents as we follow all rent-control guidelines we previously agreed to, which govern for at least 30 years,” said Metz. “We encourage the governor and Legislature to continue to invest in new rental subsidies and other programs to help low- and moderate-income households across Minnesota. … There needs to be more investment in rental subsidies to help bridge the gap for those who benefit from below-market rent-controlled housing but still need additional support to avoid being overly rent burdened.”