CUMBERLAND, Md. (Tribune News Service) — An 82-year-old Cumberland man had no idea his life was going to change forever when he arrived for his shift at LaVale Walmart on Dec. 15.

Walter S. “Butch” Marion reported for duty at his usual post, register No. 4. Not long after his day got underway a stranger began chatting with him.

The chance meeting with Rory McCarty of Cumberland would ultimately lead to a viral video and a GoFundMe account for Marion with donations exceeding $100,000 in just a few days. The fund was at more than $110,000 Christmas morning.

The hard-working senior citizen has led a remarkable life so far but what was about to happen to him at Christmastime has turned his life into a storybook tale.

Marion, a Navy veteran, said he likes to “keep busy and keep his bills paid.” He has been working at Walmart for 16 years.

“At work I’ll have a casual conversation with all my customers,” said Marion. “That is part of dealing with the public. As big as that store is, a lot of them are already stressed out. My job is to make them happy and that is what I try to do.”

McCarty came to Walmart to purchase batteries and spotted a slightly hunched over Marion working the cash register and entered his lane. McCarty, who owns a Bug Boys franchise in Ridgeley, West Virginia, has been a content provider for the social media platform TikTok for several years where he posts wildly popular videos.

“My TikTok has blown up and it has gotten me (work) in four states. Some of my videos have gotten seven, eight million views. That’s how I got a huge following. I have the largest TikTok following in the world of all pest control sites. I’m up to 270,000 followers.”

Whlle on TikTok, McCarty saw a video featuring an elderly lady with a cane working at Walmart, which struck a chord of sympathy with viewers. To help the hard-working senior, people donated online more than $100,000.

“The lady only had about 70 followers on TikTok,” said McCarty. “She went up to 130,000 in a week because of the video. I thought it would be nice to use this platform to help someone in our area. I saw her video that Thursday.”

Marion said McCarty was the last of about four people in his line, and the two struck up a casual conversation.

“Here is this man and he is still grinding and I can’t even find good help,” said McCarty. “Here is this man, 82, and I was intrigued and he was nice and personable. So I instinctively pulled out my camera and I started filming him and asking him questions.”

What McCarty learned about Marion sealed the deal.

Born in 1941 in Cumberland, Marion entered the Navy where he served for nine years. He was on a lead destroyer during the Bay of Pigs and Cuban blockade. He also spent time in Vietnam.

“When I got out I tried to get a job in Cumberland in 1968 and no one was hiring,” said Marion. “Everything was shutting down, so I got a job in Pontiac, Michigan, where I worked for General Motors for 26 years. Then, I got 15 years with the Honeywell Corporation in Panama City, Florida, and then I came to Walmart.”

Marion’s wife had been married before and had two daughters. In addition to taking the children in, Marion befriended his wife’s first husband Jim. His wife and her first husband both got cancer and Marion took care of them to the end.

“That’s what you do,” said Marion. “When they got sick, I quit my job. Jim was in the home and we took care of him. Then my wife got breast cancer and she passed in February 2005. I took care of her to the end.”

Marion said, “The kids said to me, ‘your dad now.’ That is what they told me and bless their little heart, they meant it.” Marion’s kids and grandchildren and great grandchildren mostly live in Florida.

“They said, ‘Dad, you need to go back home to Cumberland and bond with your brothers and sisters. You’ve been gone so long,” said Marion. “So I came back in 2006. That’s the way it’s been.”

McCarty decided to ask Marion if he could post the video on TikTok and start a Go Fund Me account to raise money to help Marion.

“It took me three days to track Butch down,” said McCarty. “I went up and he was off. Finally I found him at work that Sunday morning and talked to him and he was OK with the idea, so I put it on and it went crazy.”

The fund had raised more than $110,000 as of Christmas afternoon.

“I’m still having a hard time with it,” said Marion. “Even though I know what’s going down. Why was I the one that he picked? The answer to that is God.”

“I didn’t do anything extraordinary,” said McCarty. “Anyone could have done it.”

The story has garnered national attention, spreading across all forms of media.

“This thing went viral,” said Marion. “It went around the world. I had a person from Ireland even called. He donated $3,000. He said, people love you Butch. I can’t thank Rory and the people who donated enough.

“All I can tell you is the good Lord has blessed me for what I did in my younger years,” added Marion. “What this is going to do for me at 82 years-old is allow me to pay all my bills off, including my house and I will have nothing but my utility bills. I’ll be able to travel to Florida whenever I feel like going and see my kids. I’m very, very blessed.”

Marion plans to retire from Walmart.

“I didn’t know Rory from Adam,” said Marion. “You can’t realize what it is. You can’t imagine it. I’m having a merry Christmas don’t you think?”

To make a donation visit www.gofundme.com/f/twkqg-butch. 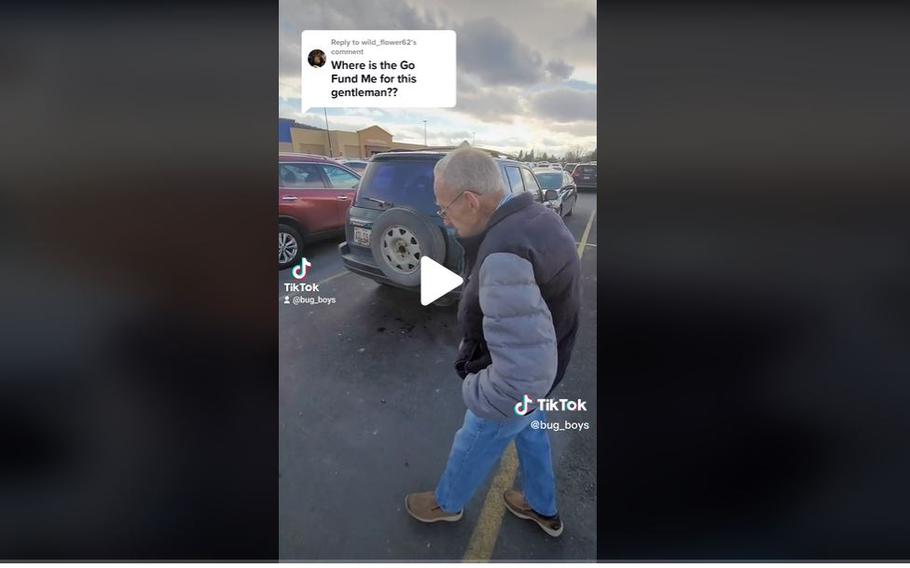