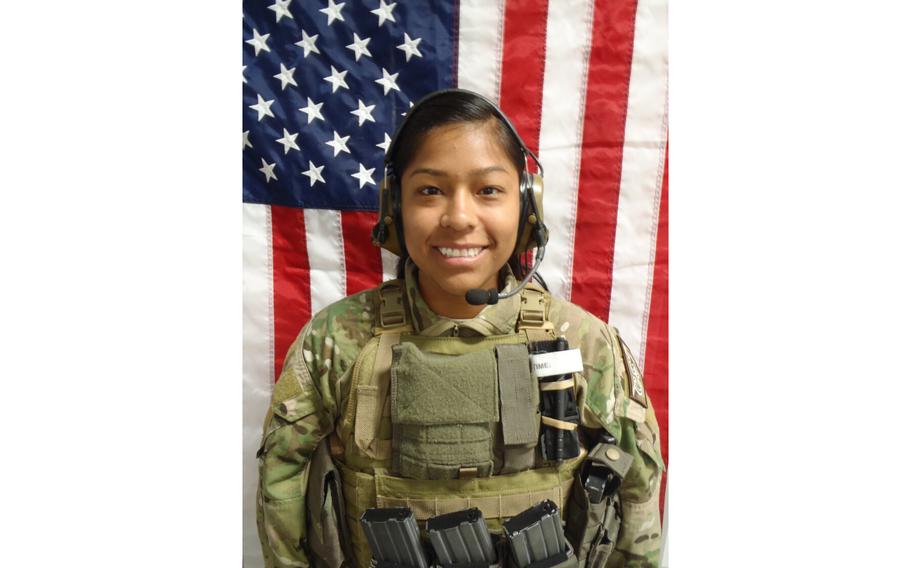 Capt. Jennifer Moreno was an Army nurse killed in Afghanistan in 2013 while serving with Special Operations forces in the Kandahar province. She was 25 years old. A 1st Lieutenant when she was killed, Moreno was awarded the Bronze Star with a “V” device for valor and promoted to captain posthumously. (U.S. Army)

The San Diego Veterans Affairs medical center was renamed this week in honor of Capt. Jennifer Moreno, a San Diego native who was killed in 2013 in Afghanistan.

Moreno was an Army nurse who died while rushing to the aid of a fellow soldier during a raid on a residential compound where a wanted Taliban member was believed to be staying.

During the raid, an Afghan woman wearing explosives detonated herself, triggering other improvised explosive devices, or IEDs, around the compound, injuring several soldiers. Moreno rushed to help one of them, triggering yet another IED. Moreno and three fellow soldiers were killed in the attack.

She was 25 years old when she died. At the time, she was attached to the Army's 75th Ranger Regiment as part of the Cultural Support Team program, which put women on the front lines at a time when they were still barred from full-time combat jobs in the military.

Moreno was promoted to the rank of captain following her death and awarded the Bronze Star with a "V" device for valor.

Moreno grew up in Logan Heights, graduated from San Diego High School in 2006 and studied nursing at the University of San Francisco on a ROTC scholarship.

She was commissioned in the Army after graduation and, while stationed at a base in Washington state, she volunteered for a program that embedded female soldiers with Special Operations units to help soldiers on the front lines deal with women in Afghanistan, whose interactions with men could be seen as inappropriate in their culture.

Moreno was selected at the recommendation of a panel of local veterans convened by Rep. Mike Levin, D-San Juan Capistrano, to identify a local veteran to rename the medical center after. The panel's report noted that Moreno's death is still resonating in the service.

"Part of her legacy is the number of young women coming from medical fields, seeking out voluntary assignments to join the CST program," the report said. "At virtually all memorials in her honor, a Ranger badge is present as a reminder of how deeply respected she was by her U.S. Army Ranger teammates."

A bipartisan bill formalizing the renaming was signed into law by President Joe Biden in March. Her mother Maria Cordova and sister Yaritza Tello attended the formal renaming ceremony at the medical center on Monday.

A second service member identified by the panel, Navy Capt. Kathleen Bruyere, will have a prominent space at the medical center named for her. Bruyere, who died in 2020, helped shaped women's equity in the Navy and the military's policy on sexual discrimination. She successfully sued the Navy and Defense secretaries in 1978 over the ban on women serving on board ships.