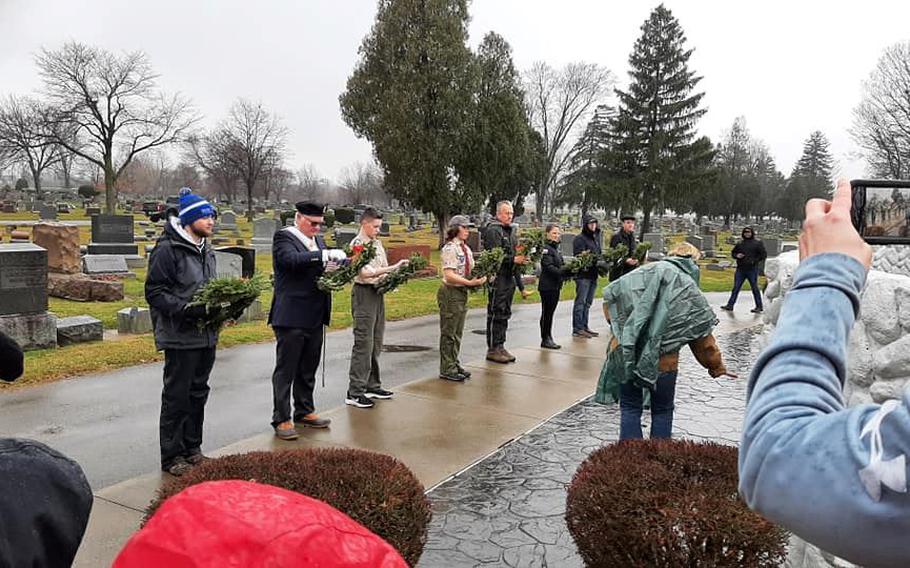 FAIRMONT, W.Va. — A tractor-trailer truck wound its way from Interstate 79 to the Baptist Temple church parking lot on Morgantown Avenue with a Fairmont Police Department escort.

The truck, a part of the fleet from Jacksonville, Florida-based logistics company Landstar, was met by local volunteers who unloaded 275 balsam wreaths that will be used to honor fallen military members next weekend on Wreaths Across America Day. The ceremony, scheduled for 1 p.m. Dec. 17 at Maple Grove Cemetery, will be one of 3,100 similar wreath-laying ceremonies nationwide to be held that day.

"I stood over at the cemetery and waved the flag as he drove by because I wanted him to know where they were going," Friends of Maple Grove Volunteer Marcella Yaremchuk said Friday.

This past September, Yaremchuk applied to the Columbia Falls, Maine-based nonprofit Wreaths Across America, which in turn, approved Maple Grove Cemetery as the first and only Marion County cemetery taking part in the program. Wreaths Across America serves to promote three tenets — remember fallen U.S. veterans, honor those who serve and teach children the value of freedom.

"I didn't even know it was possible for a cemetery that was not a national cemetery to participate with Wreaths Across America and then, when I figured out that it was, and I started doing research, with the genealogy department at the public library, and found out we have over 300 veterans buried in Maple Grove Cemetery," Yaremchuk said. "Then, I applied to Wreaths Across America to be accepted."

"We are really, really, really thrilled to be part of the program because ...we need to honor our veterans even though they've been gone for 200 years," Yaremchuk said.

On Friday, Yaremchuk enlisted a small cadre of volunteers to help unload the boxes of wreaths from the tractor-trailer to take them and store them safely until next Saturday's ceremony. One of the volunteers, Kenny Satterfield, of Fairmont, served in the Vietnam War and Operation Desert Storm and is a member of Post 17 of the American Legion.

"We try to get everything done. Marcella's a go-getter. She picked a crew that has tools, trucks and trailers and everything, so she knows how to git 'er done," Satterfield said.

Lois Layman, of Fairmont, got involved with the Maple Grove Cemetery Wreaths Across America program because she comes from a line of veterans, including her grandfather and both her father and father-in-law.

"This is a way to honor our veterans and we wanted to do something special for them because they risked their lives and they gave us our freedom," Layman said. "This is just a terrific idea."

Yaremchuk contacted multiple veterans organizations and local government entities soliciting funds to purchase the wreaths for the Dec. 17 event. Altogether, the 275 wreaths cost a total of $4,125. She said those funds are separate from the funds that groups and others donated to clean up Maple Grove. Since making a public plea for funds to purchase two signs for the cemetery, such groups as the Fraternal Order of Eagles stepped forward to help purchase a 20-foot, solar-powered flag pole that sets atop the highest peak in the cemetery.

She said she is grateful for every donation who helped honor local veterans.

"When you tell people there is a need, they're very generous, very generous," Yaremchuk said. "We have wonderful people here in Fairmont and Marion County."

What started as an idea to place extra wreaths from the Harrington, Maine-based Worcester Wreath Company on graves in one of the older sections at Arlington National Cemetery blossomed into a program that is now in all 50 states and other locations abroad.

In 2021, more than 2.4 million veterans' wreaths were placed by volunteers on headstones at 3,137 participating locations around the country in honor of the service and sacrifices made for our freedoms, with each name said out loud. Wreaths Across America volunteers work year-round to ensure military laid to rest are remembered, their families and living veterans are honored, and the next generation is taught about the value of freedom.

Yaremchuk said Friends of Maple Grove Cemetery are still accepting donations, which can be mailed to 506 Pittsburgh Ave., Fairmont, WV 26554. Any funds received will go toward purchasing wreaths for 2023's Wreaths Across America Day.