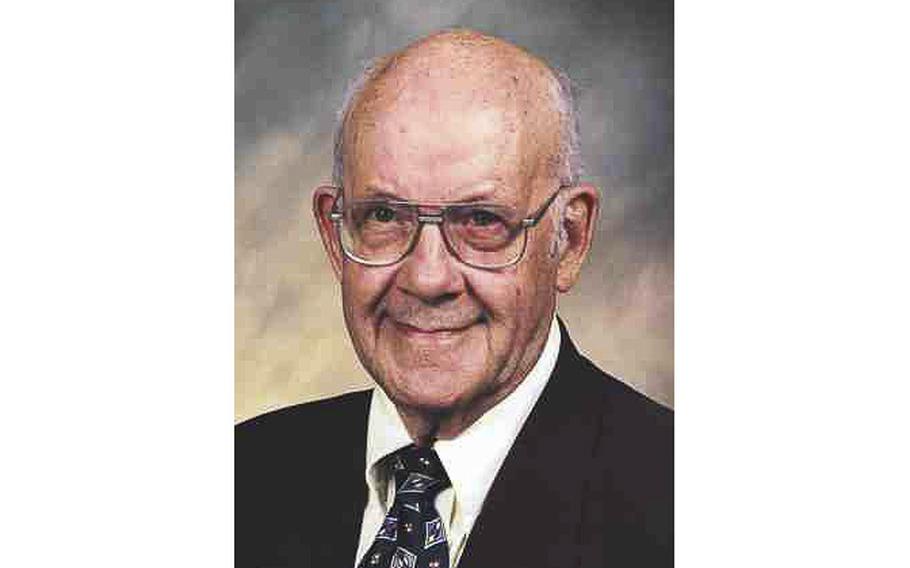 In addition to his military duties, Chapman was a Freeport area historian, author and a mail carrier then the chief clerk at the borough’s post office for 35 years.

Federal lawmakers and local supporters are in the final stages of having the Freeport branch named after him. After retiring from the postal service, Chapman worked as an installer for Four Winds Carpeting for 20 years.

Chapman was humble, kind and helpful to those in need, family and friends said.

He was also exceedingly healthy as he lived independently in his Freeport home, shopping, having lunch at the Freeport Senior Center, and attending services at the Freeport United Methodist Church shortly before his death. His son, Thomas Chapman, stayed with him during the past year to help with driving and other chores.

“He was a good Christian human being who spent his life in service, either in the military service, the postal service, or in the church,” saidhis son, of Canton, Ohio.

The elder Chapman’s helpfulness was legendary. “If you talked to anybody at the Freeport United Methodist Church, if there was a committee, Rod Chapman was on it,” his son said.

“If there was something to be done, Dad was there to do it — that’s the way he lived his life,” he said.

Chapman was born in his family home on High Street in Freeport in 1921.

He raised two children with his wife, Mary B. Chapman, who died in 2012 after 69 years of marriage.

In addition to his son, Thomas, survivors include his daughter, Arlene Faye of South Gate, Mich., and four grandchildren.

A 1939 Freeport High School graduate, Chapman acted in school plays and sang in choral concerts before taking a job at Allegheny Ludlum Steel in Brackenridge. Two years later, he was drafted into the U.S. Army during World War II. He fought in the European Theater with E Company of the 144th Infantry Regiment.

The Nazis captured Chapman and other soldiers. They spent nearly eight months in a German prisoners of war camp before escaping.

Chapman received several notable honors for his service. Wounded in action, he was awarded a Purple Heart. He was awarded the Bronze Star for acts of valor in combat and the French Legion of Honor award.

In his own written account of his wartime service, Chapman said that before the Nazis captured him, he operated a Browning machine gun to take out German machine gun nests.

“Every time my dad and the other soldiers approached an enemy machine gun nest, he knew what had to be done,” Chapman’s son said. “He did what he had to. He was in the Army, but he was not pleased doing it because he was taking a human being’s life.”

One of Chapman’s friends, Pastor Raymond Straughn, who will lead the funeral service on Friday, said Chapman’s humanity was evident when he spoke about his military service.

“Rod never held it against the Germans for being in a POW camp,” Straughn said. “He never bragged about his military service. He was always humble.”

Chapman was considering the ministry after the service, but the opportunity for training wasn’t there at that time, Straughn said.

Straughn is the manager of the Freeport Senior Center at the Freeport VFW. That’s where Chapman came for lunch most weekdays.

Chapman was playing the virtual Wii sports bowling game one day at the center with friends and someone inadvertently sent the remote control hurling at the back of Chapman’s head, Straughn said.

Chapman turned around and smiled. He said to one of the players, “Do I have to take you outside and ‘learn you?’” Straughn said.

Like Chapman’s son, Straughn described Chapman as a great Christian. “Rodney lived his faith. You never heard him say anything derogatory about a person. You never saw him lose his temper. He never held a grudge against anybody, and he always forgave everybody.”

Redmond Funeral Home Inc. in Freeport is handling the funeral arrangements. Visitations are set for Thursday from 2 p.m. to 4 p.m. and from 6 p.m. to 8 p.m. The funeral service will be held on Friday at 1 p.m. in the Freeport United Methodist Church.

Chapman will be buried with full military honors at Freeport Cemetery.

Visit The Tribune-Review at www.triblive.com