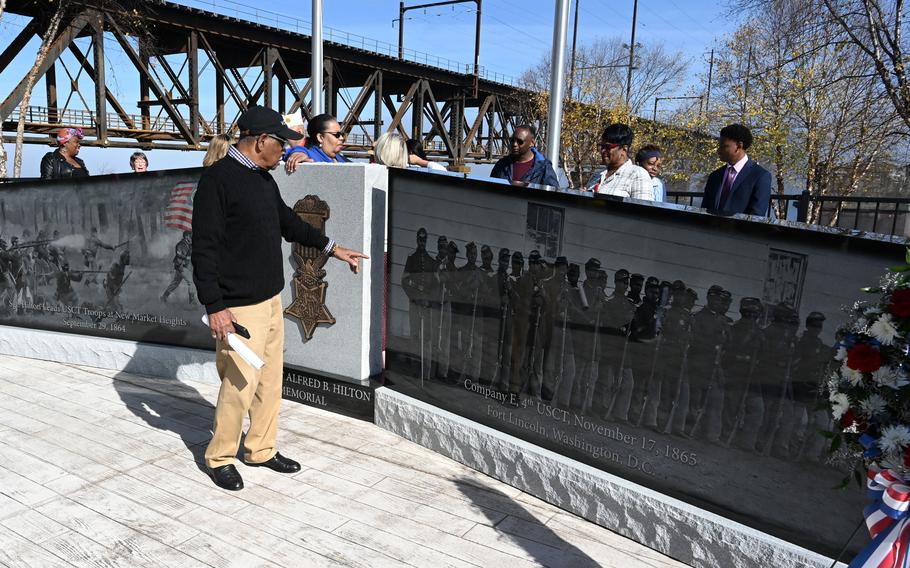 (Tribune News Service) — Harford County on Friday celebrated the unveiling of the Sgt. Alfred B. Hilton Memorial at the David Craig Park. The memorial commemorates Harford County’s only Medal of Honor recipient.

“This memorial will serve as a lasting tribute to the only native of Harford County to receive our nation’s highest military honor,” said Curtis Beulah, chair of the Sgt. Alfred B. Hilton Memorial Fund Inc. and District F council member.

The Havre de Grace site features a picture of what is believed to be Hilton and his unit and the flags of Hilton’s country, state and county. Hilton’s personal history is engraved on the back of pictures of Hilton’s unit.

“This has been amazing and overwhelming,” said Joi Hilton, the great-great-great-great-niece of Alfred Hilton. “People can come out and see where he came from. They can find all the history of him right here.”

State and local officials, along with residents of Harford County gathered Friday to recognize those involved with keeping alive the memory of the historical figure.

Hilton is one of 16 Black Union Army soldiers who received the Medal of Honor for their service during the Civil War.

According to the the Sgt. Alfred B. Hilton Memorial Fund, Hilton was born in the Hopewell area of Harford County, now Level, around 1842 to Harriet and Isaac Hilton, free citizens who had formerly been enslaved in the county.

Hilton enlisted with the 4th Regiment United States Colored Troops in 1863 and was made a color bearer in 1864, tasked with carrying the national flag into battle.

On Sept. 29, 1864, Hilton and his regiment advanced ahead of Union troops against entrenched Confederate defenses at Chapin’s Farm outside Richmond, Va. — a critical engagement during the war, according to the foundation. Hilton was wounded but continued to advance, picking up the regimental standard from another fallen soldier and carrying the national and regimental flags forward until he was unable to go farther.

Before he fell, he passed the flags to others in his regiment and said “Boys, save the colors!” He died of his wounds in a segregated hospital in Hampton Roads, Va., on Oct. 21, 1864, and is now buried in the Hampton National Cemetery, according to the foundation.

Hilton died around 22 years old, which means he did not really get to fully experience life yet, Joi Hilton said. Many of his descendants, such as Joi, have never even got to see what he looked like in a picture or in person, Hilton said. However, he was posthumously awarded the Medal of Honor.

“This monument will mean a lot to a lot of people,” said William Martin, mayor of Havre de Grace. “This answers questions that he [Hilton] never got to answer.”

About 180,000 Black Americans had joined the fight by the end of the Civil War, despite rampant discrimination and earning lower wages than their white counterparts, according to the Library of Congress. It is estimated that a third of all the African Americans who enlisted died.

“This county and community has come together to never forget,” said U.S. Army Maj. Gen. Robert L. Edmonson II. “Of the 40 million Americans who served in the armed forces since the Civil War only 3,520 have been awarded this medal [the Medal of Honor]. Far less than 1%, and during the Civil War only 16 African Americans soldiers received the medal of honor.”

“This type of stuff (a memorial ceremony) just doesn’t happen that often especially for an African American in the Civil War,” Joi Hilton said. “It says lot.”

With this unveiling, the foundation’s mission to preserve his memory and educate the public about his overlooked heroism will now expand to focus on a grave marker preservation program that seeks to identify, locate and appropriately mark the graves of U.S. Colored Troops buried in Harford County.

“Bringing Hilton’s story to light has been a hallmark for this administration,” said Bob Brown, representative for County Executive Barry Glassman. “This memorial will serve as a lasting tribute of the only Harford native to receive the highest honor.”

Annual scholarships will continue to be awarded in honor of Hilton to students attending Harford Community College.

In January 2021, a Civil War-themed playground opened in Alfred B. Hilton Memorial Park off of Gravel Hill Road, in the area just west of Havre de Grace where Hilton grew up and his descendants still own property. The playground was funded by the county, said Bob Brown, who represented County Executive Barry Glassman at the event.

In May 2021, the Sgt. Alfred B. Hilton Memorial Fund announced it would be building a monument to commemorate Hilton at David R. Craig Park. Originally, the monument had been planned for Millard Tydings Memorial Park, but buried utility lines made the site unworkable, and there was not appropriate space for it, so Havre de Grace agreed to dedicate a part of David R. Craig Park to the memorial.

To learn more about Hilton and the foundation, visit www.sgtalfredbhiltonfoundation.com.