(Tribune News Service) — To most people, living 100 years is a milestone. But John A. Hutton sees it as “the same old, same old” except with “a lot more attention.”

On Saturday, the longtime Kansan will celebrate his 100th birthday surrounded by family at his Wichita home, where he lives independently — something that won’t change anytime soon if he has anything to say about it.

He’s not overly concerned with the usual fuss birthdays bring — although there will be cake and balloons.

But he is looking forward to visiting with loved ones who are planning to share memories from his 100 years of life.

Centenarians are rare, less than 1% of the U.S. population, according to U.S. Census Bureau numbers.

Asked for his secret to living long, Hutton joked: “postpone everything.” Spry and witty as ever, he didn’t elaborate. At 100, he doesn’t have to.

“I think part of his longevity is his desire to know stuff.”

Impressive as it is to join the ranks of the country’s longest-living residents, Hutton also belongs to another notable group: veterans who served in and survived World War II.

With around 167,000 still alive across the U.S. and an estimated 180 deaths daily, Americans with World War II service is a rapidly dwindling population, according to U.S. Department of Veterans Affairs statistics cited on the National World War II Museum’s website. Fewer than 1,600 live in Kansas.

In 1944, after the B-24 Liberator bomber Hutton was navigating got shot down by enemy fire, he was taken prisoner of war and survived months in Nazi-controlled prison camps.

Leading up to his birthday, he spoke with The Eagle last week about his life and war experiences.

As WWII raged, a choice

Hutton was born in St. Louis, Missouri, on Nov. 26, 1922, the only child of an insurance businessman and a school teacher. He enjoyed a “very typical” childhood, he said, growing up in Arkansas City, Kansas, and graduated high school among the top of his class in 1941.

One of his first jobs, newspaper boy for the Arkansas City Traveler, earned enough money to buy a 1931 Model A Ford, his first car.

The paper charged 15 cents a week per customer. He pocketed a nickel apiece, sometimes profiting as much as a dollar a week.

“My father didn’t want to loan me his Pontiac as much as I needed full time,” he recalled with a laugh. “So I bought my own.”

It was a fitting name since classes were held in the basement of the town’s old high school, he said.

But with World War II raging in Europe, Hutton left junior college after one year.

He faced a choice: enlist or risk being drafted.

“If you enlisted, you had some choice in where you went. If you got drafted, you go where they sent you with a rifle in your hand,” he said. “That was the truth of the matter.”

So on June 29, 1942, the gray-eyed, red-headed 19-year-old Ark City teen enlisted in the United States Army Air Corp, the aerial wing of the Army that preceded the U.S. Air Force. He trained to be a navigator on the B-24 Liberator, a U.S. heavy bomber that played a pivotal role in the Allied war victory.

It was a step that would put him squarely in the middle of combat. 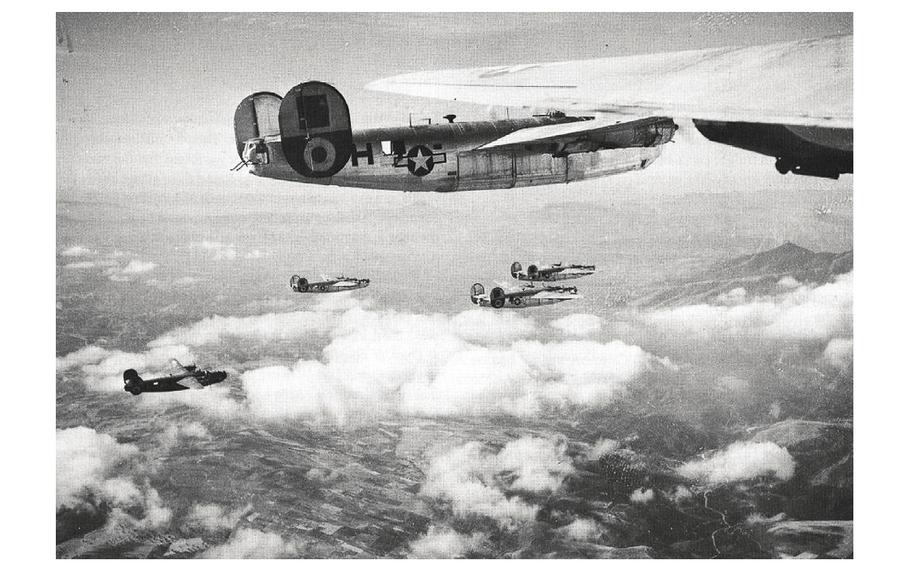 B-24 Liberators from the 460th Bombardment Group fly in formation in 1944. After the B-24 bomber John A. Hutton was navigating got shot down by enemy fire, he was taken prisoner of war and survived months in Nazi-controlled prison camps (U.S. Air Force )

Shot down after bombing near Auschwitz

Hutton flew a total of 18 missions in World War II. He was based in Spinazzola, Italy, serving as a 2nd lieutenant in the 460th Bomb Group, 763rd Squadron, 15th Army Air Force.

Being a navigator involved getting bombers to their targets and leading them back to friendly territory with little more than charts, mathematics and the stars. It was a position usually pursued by prospective pilots who didn’t make the cut, he said.

Hutton thought he would have a knack for it.

He was skilled enough that he was often assigned to ride in the Plexiglass-enclosed front turret of the lead plane during bombing runs to German-controlled military and industrial complexes, he said.

It was dangerous work, with crewmen often dying from anti-aircraft fire. On each mission he flew, Hutton worried he’d meet the same fate “every time.”

On Sept. 13, 1944, Hutton loaded into a B-24 with nine others and set out for German chemical conglomerate IG Farben’s plant in Oswiecim, Poland — a city known as the site of the Auschwitz concentration camp.

The flight was due to take about seven hours, round trip. But after the B-24 dropped its bombs on target, anti-aircraft gunfire hit the plane, damaging two of four engines, Hutton said.

Functioning at half power, the heavy bomber couldn’t keep up with its companion aircraft.

The plane lagged behind, losing altitude until it crashed in Hungary, two-thirds of the way through its limp back to Italy.

Eight of the 10 men aboard bailed out when the pilot gave the signal.

The pilot and co-pilot died when the B-24 slammed into the ground.

Hutton said when it was his turn to bail, he pushed out a fellow crew member who was too afraid to jump and then flung himself from the door. The scared man later thanked him, he said.

The emergency jump was risky, because it was “way too low,” Hutton recalled.

He yanked his parachute cord at the same time he jumped, which was dangerous. But luckily, “it worked,” he said.

Instead of a soft landing, Hutton’s parachute snagged in a tree in a small wooded area surrounded by open fields filled with working farmers.

When he came down, he tried to hide, but the farmers closed in and threatened him with pitchforks.

Hutton said after he and the surviving crew members were rounded up, they were kept in secure small-town wire jails before being taken to Budapest. Later, he was transferred to a prison camp about 100 miles southeast of Berlin called Stalag Luft III. When that camp evacuated in 1945, Hutton and other prisoners were forced into Stalag VII-A, a prison camp near Moosburg in southern Bavaria.

Back home in Kansas, his parents were told he was missing, likely a prisoner of war. “I think they wrote me off,” he said.

But conditions were harsh.

He kept busy with jobs — he was a barber after showing some skill cutting hair — and reading. One of his prized possessions was an economic textbook dropped in by the Red Cross, the same textbook he would later be assigned in a college-level introductory economics class.

When it came to food, resources were scarce.

There wasn’t enough for the Germans, “so they didn’t give a fair share to the prisoners, naturally,” Hutton said.

Mostly, his calories came from meager servings of barley, cooked and served plain. He still likes the cereal grain to this day.

Sometimes, he got dehydrated vegetables, but they were rationed to extreme.

‘He doesn’t give up’

After the liberation, Hutton stayed in Paris for a few days then shipped back home to Arkansas City. His weight rebounded. And life went on.

He returned to college in 1945, attending Kansas State University on the GI Bill. There, he met a young beauty named Mary Prudence Bennett in his Economics 101 class and married her after he earned a bachelor of science degree in 1947. The couple had four children and settled in Newton, where Hutton worked as president of First Kansas Life Insurance Company while his wife taught English at Bethel College.

As his children grew, Hutton pressed the value of education and becoming well rounded, always practicing what he preached, his son, Andrew Hutton, said.

For instance, when Hutton decided he wanted to learn the Spanish language, he taught himself how to read and speak it using dictionaries and often struck up conversations with Mexican-American waiters and store workers for practice, his son said.

“We used to have to talk Spanish at the breakfast table,” Andrew Hutton said, adding that his father was most-proud of his children, one of whom died in childhood.

The rest — twin sons and a daughter — went on to become lawyers, attending the same law school simultaneously and graduating in the same class in May 1979, Andrew Hutton said. The twins co-founded Wichita’s Hutton & Hutton law firm.

In retirement, John Hutton relocated to Las Vegas with his wife. He moved back to Kansas after she died from breast cancer on March 17, 2010, some months after celebrating their 60th wedding anniversary. Last year, another son died.

Andrew Hutton said his father rarely talked about his time in the Nazi prison camps.

He didn’t know his father was a prisoner of war until a friend told him around sixth grade.

But he thinks the harrowing experience made his dad “more resilient.”

Visit The Wichita Eagle at www.kansas.com