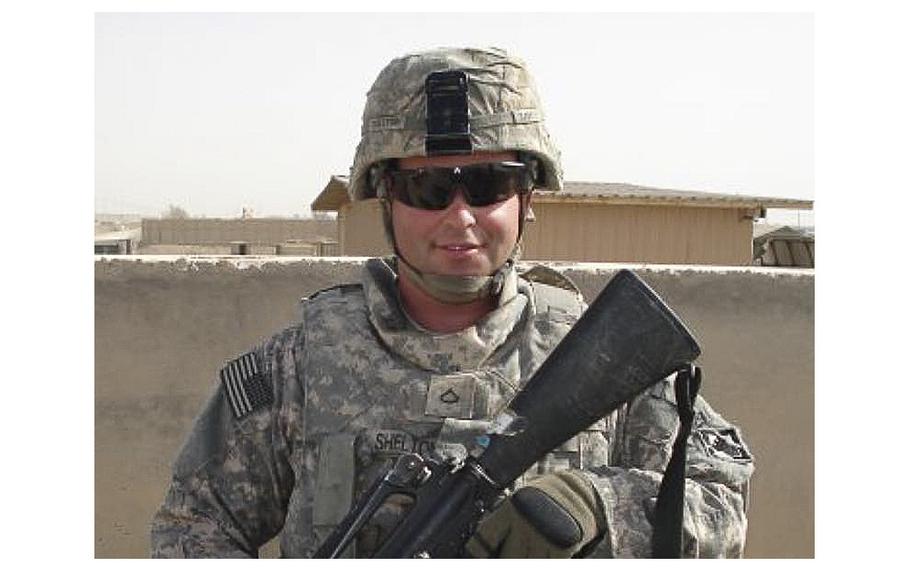 (Tribune News Service) — Jonathan Shelton was ready to call it a life.

Today, Shelton is in charge of the youth ministry at the Libby Christian Church and he has a life for which he and his family are very thankful for.

“My son and I love hunting and my daughter loves to fish, so Libby is a great place to be,” he said,

But less than a decade ago, the effects of serving his country in war in the Middle East had left him mixing opioid painkillers and whiskey.

“It had become a way to end my life,” Shelton recently told The Western News. “I needed the painkillers for the pain, but the whiskey was taking it to another level.”

Shelton was a victim of the 2008 recession. He had lost his job, but he still felt like he was one of the lucky ones because the work was not very fulfilling.

“Shortly before I was laid off, I had joined the Army Reserve in 2007 and after the layoff I decided to go full-time active. It was God’s doing,” Shelton said.

Shelton’s father was a career military man, serving 36 years in the U.S. Army. He credits him for the example he set for his son.

“My class of 100 recruits had 12 graduates in it and I give me dad credit for that,” Shelton said.

Shelton then became a member of a Special Ops team.

“It was more like a family and I still miss it today,” he said.

But those special times included the ravages of war after he was deployed to Iraq. He and his unit were exposed to what he called three separate IED occurrences.

IEDs are improvised explosive devices, homemade bombs, that are intended to destroy or incapacitate their targets.

In addition, Shelton and five others in his unit were poisoned. Even today, he’s not sure how it happened.

“Our little group, in an effort to be part of the local culture, were eating local food,” Shelton said. “I’m not sure, but we assumed we were poisoned by something that was put into the food. It was the only time we ate together.”

Shelton said he bled from his fingers and toes and the coughing fits that included violent vomiting were indescribable.

“Two in my unit ended up committing suicide and three others died,” Shelton said.

“The doctors’ prognosis for me was dire. They would say, ‘I don’t know how you’re alive.’”

But Shelton credits his faith for where he is now.

“I gave my life back to the Lord,” he said. “I learned how to overcome the bitterness and I rededicated my life to God and my family.”

In 2012, Shelton received a full medical retirement. He paid a great price for his time in the Middle East, but today he says it was a path he was meant to take.

“After I returned home, my wife Tabitha and I had our first child,” Shelton said. “But I was in my haze of painkillers and whiskey and shortly after he was born, they left and I missed his first birthday.”

But God had other plans for Shelton. He ended up in Libby and began working with a physical therapist at OrthoRehab Physical Therapy.

“I worked with him for about 18 months to two years and that made a huge difference,” Shelton said. “We never separated, but I needed to get things figured out.

“We both didn’t want to divorce and to her credit, she let me come back to Coeur d’Alene,” Shelton said.

Shelton and his family rented land there until the costs kept going up and they moved to Libby.

“A man had died and we knew his family and we bought the house,” Shelton said. “The price was right and we did a bunch of remodeling and work to get it ready for the family.”

The family was soon to grow as Tabitha was pregnant with their second child. Payton is now six years old.

“That was a miracle, too, because the doctors said I was infertile,” Shelton added.

Shelton’s travails weren’t over, though. In 2020, he was diagnosed with Parkinson’s disease. Doctors told him it was a result of brain damage he suffered from the IED explosions.

But despite it, God still had more work for Shelton. Matt Warner, who was the youth minister at Libby Christian Church, had left. Shelton was volunteering at the church.

“It had been open and I had thought about it, but then one day I told Phil (Alspaw) that I was interested. They agreed to give me a shot and now I’ve been the youth pastor for the last eight months,” Shelton said.

The youth program had 20 kids in it, but Shelton said there are now more than 60.

For those who attended Veterans Day ceremonies at Veterans of Foreign Wars Harper Erdman Post 1548 in Libby, they’ve heard Shelton’s story. Shelton was there with many other vets to receive a Quilt of Valor from the Kootenai Valley Quilt Guild.

Mary Hickey made Shelton’s quilt and she told him he must share his story with others.

“After she heard everything, she said I must tell it to others,” Shelton said.

Shelton shared his words of inspiration that night.

“Giving your life to the Lord makes it have a purpose,” he said. “People can’t forget that if they just have one positive in their life, they should look at it, focus on it and build on it.”

Visit The Western News at www.thewesternnews.com