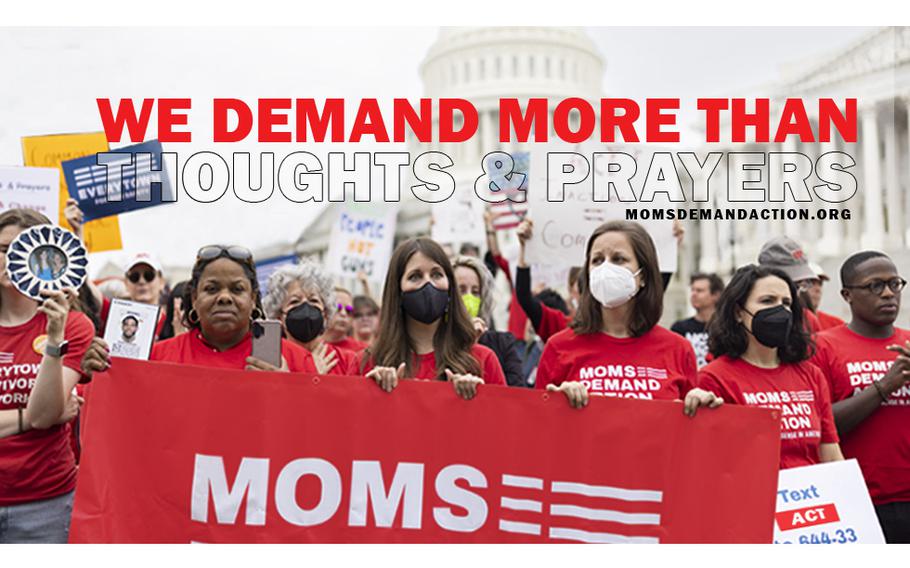 A cover photo for the Mom’s Demand Action Facebook page is seen. According to reports on Friday, Nov. 25, 2022, an Army veteran pleaded guilty to sending a letter to a the Department of Veterans Affairs, threatening to shoot members of Moms Demand Action, a grassroots organization advocating for the end to gun violence, if he didn’t receive his pension. (Facebook)

(Tribune News Service) — A Florida man pleaded guilty to sending a letter to the Department of Veterans Affairs that threatened to shoot members of an organization that advocates for an end to gun violence, United States Attorney Rachael S. Rollins’ Office said.

Drummond Neil Smithson, 31, pleaded guilty to one count of use of interstate communications to transmit a threat to injure. He was indicted by a federal grand jury on May 12, 2022.

Smithson, an Army veteran, mailed a letter from Ayer, Massachusetts to the Department of Veterans Affairs Pension Intake Center in Janesville, Wisconsin around July 19, 2020. In that letter, Smithson threatened to shoot members of Moms Demand Action, a grassroots organization advocating for the end to gun violence, if he didn’t receive his pension.

In the letter, Smithson references a federal court case against him in the Southern District of Florida in which he is charged with possession of firearms and ammunition by a person prohibited to do so, court records show.

Smithson was arrested in September 2019 after violating an order of protection that was served to him on June 29, 2019, by a Tennessee court. That order prohibited Smithson from possessing firearms or ammunition.

On Sept. 12, 2019, Fort Lauderdale police officers accompanied Child Protective Services to his apartment, which he shared with his girlfriend, her two minor children, and two unrelated adults, and found him in possession of multiple firearms, court records said.

Smithson told the officers that he moved to Fort Lauderdale after his discharge from the Army and that he had spent a lot of time in psychiatric hospitals.

When asked how he was feeling, Smithson said he still has anger issues. He told the officers he had two rifles and two handguns in the bedroom that he shared with his girlfriend and her two minor children.

Smithson was arrested on Sept. 19, 2019, after investigators learned of his order of protection. He told investigators that he did not think Florida would enforce the Tennessee order because it was issued by a “corrupt judge,” records showed.

Smithson also told authorities that he bought AR-10s because they are more powerful than AR-15s and “if someone comes knocking on my door with body armor and riot shields, I want to have the means to protect myself,” court documents showed. He added, “I have been targeted by corrupt protection orders” and “if they want to send a SWAT team into my apartment with body armor, I don’t want to be sitting there with little BB-gun AR-15s.”

On Dec. 5, 2019, Smithson spoke with law enforcement by phone and told them that he was living on a boat in Monroe County. During this conversation, Smithson told authorities that the protection order was just a piece of paper used as a tool by the government that was not constitutional and that he would intentionally violate the order. Smithson stated that he had purchased two additional firearms since law enforcement removed his four firearms from his apartment in September, court documents said.

Authorities were later able to confirm his firearm purchases through traced purchase reports.

On Feb. 2, 2020, Smithson attended a Mom’s Demand Action gun control rally in Parkland, Florida, carrying a rifle case with the words “Come take it” painted on the case. He wore a “Go-Pro” digital camera to film the reactions of other attendees and possible confrontations. Smithson was eventually ejected from the rally by police after arguing with another attendee, court documents stated.

In his July 2020 letter, Smithson wrote that he had been incarcerated for about 5 months and that his trial was set for Sept. 14, 2020.

“The U.S. Constitution says that I have the right to bear arms, so technically I did not even commit a crime by doing so. Some dumb*** judge took my kids away so I started buying Assault Rifles after the hearing. Bascially a Judge took Hostages so I started buying guns.

I’m sorry but if you take my pension there is going to be retaliation. I spent over 200 days in psychiatric hospitals to get it and I’ll be damned if the government is going to just take it and walk free. Remember when that guy in Flordia walked into the VA Hospital waiting room and killed himself in front of 100 people? Sure is a good thing he didn’t just walk in there and start shooting. You know why he did it? Because someone at the VA didn’t take him seriously. If you want to be that someone then go right ahead.

You take my pensions and the second I get out of prison I will go to a Moms Demand Action meeting. I figure if I’m leaving I might as well take the trash on my way out right? It will be a first-hand lesson on why 1 of 30 people in a room may want to carry a gun. The Anti-gunners will all hide behind their chairs, calling 911, pleading for a guy with a gun to come and save them. Would be one hell of a big mess to clean up. Try me.”