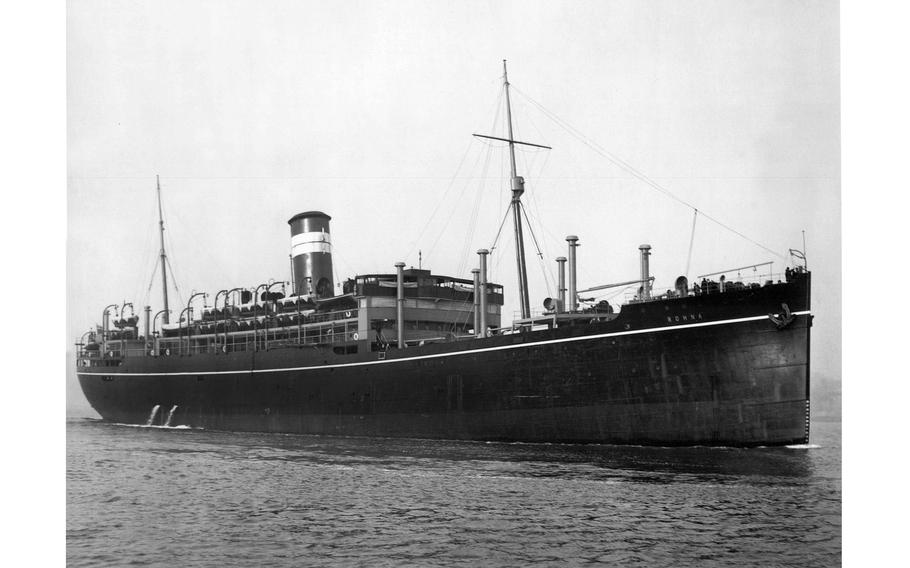 The HMT Rohna was a British cargo ship that was transporting U.S. soldiers and British troops to India to build bases for B-29 bombers. It was struck by a radio-controlled missile dropped from a German plane on Nov. 26, 1943. (Rohna Classified/Facebook)

BEVERLY, Mass. (Tribune News Service) — Saul Gurman was in the kitchen of his Beverly home one night 22 years ago when he heard the authoritative voice of NBC Nightly News anchor Tom Brokaw coming from the TV in the other room. “And now for the best-kept secret of World War II,” Brokaw announced. “The sinking of the Rohna.”

Gurman dashed into his den to hear the news. But in fact, the best-kept secret of World War II was no secret at all to Saul Gurman.

As a 20-year-old U.S. Army soldier, he was aboard the British ship Rohna on Nov. 26, 1943, when it was struck by a radio-controlled missile dropped from a German plane. The attack sank the ship and resulted in the deaths of 1,138 men, including 1,015 Army troops, making it the greatest loss of U.S. life at sea due to enemy action.

But the story of what happened that day, including Gurman’s dramatic tale of survival, remained mostly secret for nearly 60 years. The U.S. government classified the matter to prevent the Germans from learning how effective the guided bomb had been against the Rohna, and ordered the survivors not to talk or write home about it.

With another anniversary of the tragedy coming up on Saturday, Gurman, now 99, was eager to tell the story that he’d been forced to suppress for so many years. Sitting on the couch in his home across the street from Lynch Park, he appeared in robust health and displayed a sharp memory for the details of that day.

“I was bursting all these years,” he said of being sworn to secrecy. “I wanted to get it off my chest.”

Gurman, who grew up in Chelsea, said he joined the Army after his older brother, who had already enlisted, was reported missing in the battle of Guadalcanal (his brother was eventually found alive). Gurman trained as an aircraft propeller specialist with the Army Air Corps and ended up aboard the HMT Rohna, a British cargo ship that was transporting U.S. soldiers and British troops to India to build bases for B-29 bombers.

Gurman said he was in a hold near the bow of the ship when he heard a sound like scraping metal. Years later, the same sound, caused by a train arriving at the station back in his hometown of Chelsea, would spark an attack of post-traumatic stress that sent him to the hospital.

“It felt like somebody lifted the whole ship out of the water,” he recalled. “An English officer came up to me and said, ‘Better get off the ship, Yank. She’s going down fast.’ ” 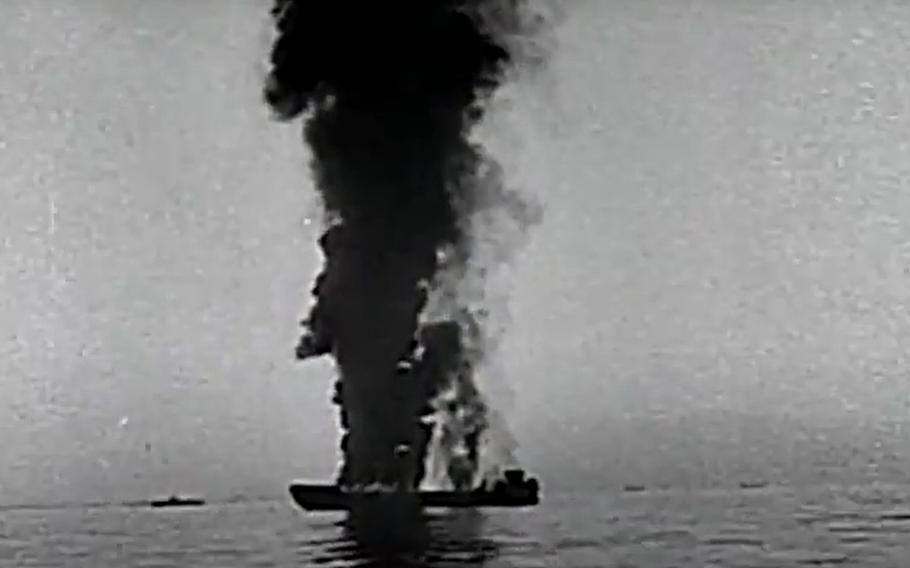 The HMT Rohna was a British cargo ship that was transporting U.S. soldiers and British troops to India to build bases for B-29 bombers. It was struck by a radio-controlled missile dropped from a German plane on Nov. 26, 1943. (Screen capture from YouTube)

Gurman remained on board as long as he could, releasing lifeboats that were tied to the railing and dropping them to the men who had already jumped overboard. At a seasoned 20 years old, Gurman said he felt a responsibility to help the younger soldiers.

“I was a cool cucumber,” he said. “I stayed on the ship until the very end.”

Eventually, with the ship sliding into the Mediterranean Sea, Gurman crawled to the bow, took off his shoes, jacket and helmet, and slid his inflatable lifebelt from his waist to his armpits. “I looked at the horizon and just stepped off,” he said. “When I went down I didn’t think I was going to come back up.”

Gurman said the only time he panicked was when he resurfaced and found himself among a swirl of ropes. “My only thought was, ‘OK, what is Eva (his girlfriend and future wife) going to think when I don’t come home?’ ” he said.

He began dog-paddling for half an hour, maybe an hour, when he heard a voice calling for help. The soldier told Gurman his legs were broken, so Gurman took off his own lifebelt and put it around the injured man. The two floated together for another hour when Gurman saw a red light in the distance. The light was coming from a lifeboat, but by the time it got to Gurman and the injured man, it was upside down. One of the men, whom Gurman knew, was sitting on the overturned boat and singing, “Nobody can stop the Army Air Corps.”

At around 11:30 p.m. — six hours after the bomb struck the Rohna — Gurman spotted a cargo ship on the horizon. The men on the ship threw a rope overboard, and Gurman made a sling and tied it around the injured man so he could be hauled aboard. Another man, who had become a close friend of Gurman’s, was not so lucky. As he attempted to climb a rope ladder to board the rescue ship, weakened from exhaustion, he yelled to Gurman, “I don’t think I’m going to make it,” and fell back into the cold Mediterranean waters.

Gurman himself eventually climbed a ladder to the ship’s deck and was pulled by his hair over the railing. Asked how he felt at the moment he had been saved, he said, “I don’t think I was thinking anything. Even the next day I can’t remember having any thoughts.” He was one of 966 survivors.

Gurman had injured his elbow and lost a tooth when he banged against the ship while climbing the rope ladder. His high school graduation ring was gone, apparently slipping off as his fingers shrunk from the cold water. He said he doesn’t remember the cold, or the 10-foot waves, or the constant strafing from German planes overhead. “I was so focused I never saw any of that or heard any of that,” he said.

Gurman returned home after the war and married Eva. They moved to Beverly and raised three children. Gurman said he told his wife that something terrible had happened to him during the war, but he never told her the details until the day Tom Brokaw spoke up from the other room.

Gurman, who sold trailer hitches for a living, worked up until a few years ago. Eva died in 2012. Gurman has been to several reunions for survivors of the Rohna, and has been interviewed for an upcoming documentary on the tragedy.

Gurman said his memories of the sinking, and the thousand-plus men who died, come flooding back at this time of year.

“I just get into an ugly mood,” he said. “I never got over it. But I was really lucky.”