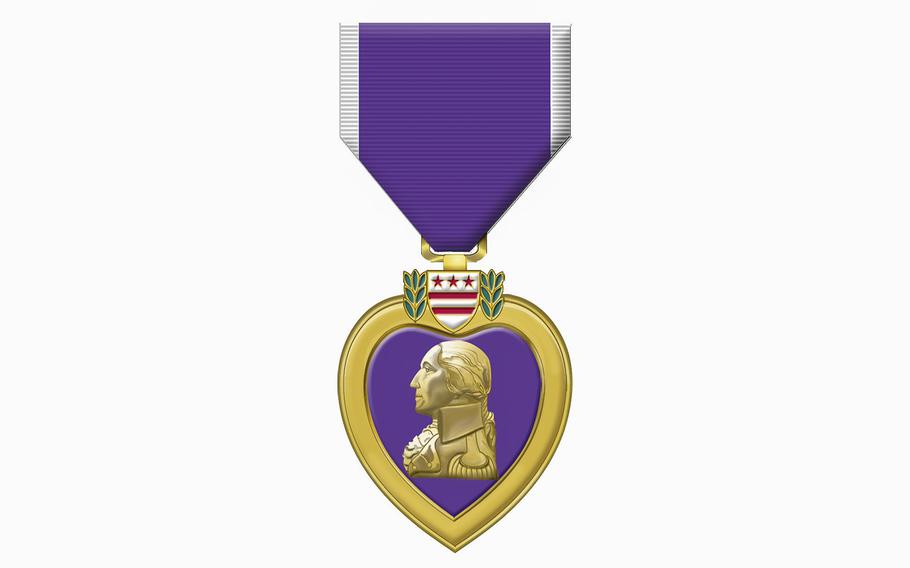 The Purple Heart is awarded to those wounded or killed while serving in the military. (Air Force)

(Tribune News Service) — The state is trying to find the owners of 11 Purple Heart medals that are among unclaimed property in its possession.

The decoration is awarded to those wounded or killed while serving in the military.

When property is considered abandoned in Illinois, it is turned over to the State Treasurer’s Office and an attempt is made to locate the owner. In the case of the medals, each was among the contents found inside unclaimed bank safe deposit boxes. Several have been in the state’s care since the 1990s.

“These medals personify honor, sacrifice, duty. We call on the citizens of Illinois to help us return these medals into the loving care of their families,” State Treasurer Michael Frerichs said.

It is unclear in many cases when the medal was awarded, or whether the name associated with the safe deposit box is the same as the medal recipient.

• Robert Cawthon, collected from from Fifth-Third Bank in Oak Park in 1992.

• Lawrence M. Burns, collected from Advanced Bank in Homewood in 1997.

• Linda K. Moore, turned over to the state in 2001 from National City Bank in Peoria.

• David Gorski, submitted to the state in 2003 from Hinsbrook Bank & Trust.

• Vincent G. Tuttle, collected from Busey Bank in Pekin in 2018.

• Toni Alexander, submitted to the Illinois State Treasurer’s Office in 2018 from First Midwest Bank in Shorewood.

• Isbell Servina, Mary A. Shayer or Vincent P. Shayer, collected in Chicago in 2018.

• Michelle Steward or Patricia VanHasselaere, possibly of Round Lake, submitted in 2018.

• Kenneth Wiest, possibly from O’Fallon. The Purple Heart was turned over to the state in 2019.

“Our ask is simple. If you recognize a name, and you know they had contact with the city, then reach out to them or their relatives because maybe we have their Purple Heart,” Frerichs said.

Claims can be made at illinoistreasurer.gov/icash. The state holds about $3.5 billion in property from bank accounts, investments, returned checks or safe deposit boxes that were inactive for several years.

Since 2015, the State Treasurer’s Office has been able to return seven Purple Hearts to their owners or heirs.

Visit the Jacksonville Journal-Courier at www.myjournalcourier.com