This 100-year-old veteran reads to Raleigh’s blind every week. ‘It’s my calling.’ 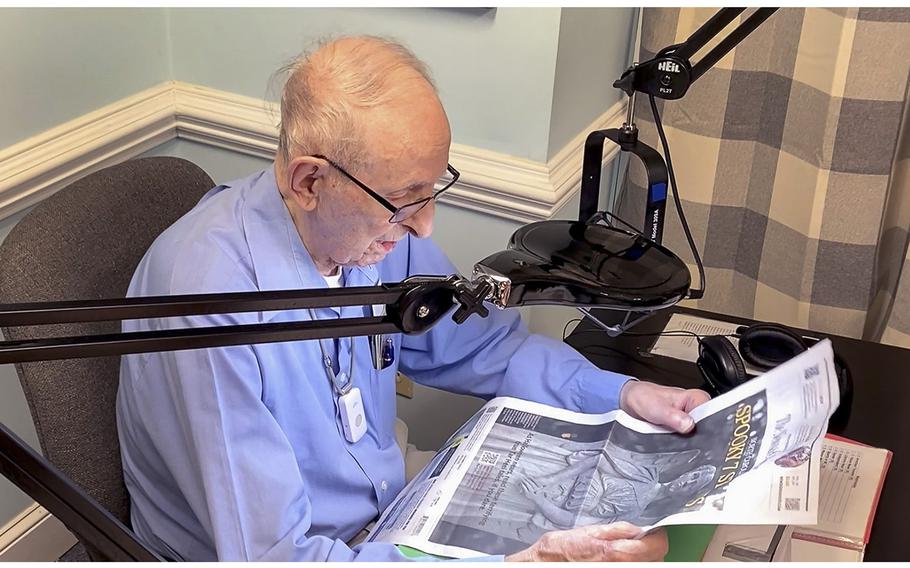 World War II veteran Bob Kruger, 100, has been reading to the blind and visually impaired through a reading service in Raleigh, N.C., since 1985. “It’s my calling,” he said. (Josh Shaffer/Raleigh News & Observer/TNS)

RALEIGH, N.C. (Tribune News Service) —  Every Wednesday morning at 10, Bob Kruger rolls his walker into the studio, plunks down in a comfortable chair and starts reading the newspaper in his gravelly voice — a 100-year-old radio celebrity with an audience that swoons over every word.

He even reads the grocery advertisements, because his listeners — all of them blind or visually impaired — will want to know if chicken thighs are on sale.

“When I do the obituaries,” he says, “I always apologize ahead of time if I mispronounce the person’s name. Let’s face it: We all like to hear our own name.”

Kruger, who marked 100 years on Earth this year, has broadcast in Raleigh for the nonprofit NC Reading Service since 1985 — long enough for two generations of sightless listeners to know his voice.

He and on-air partner Jeanne Latshaw get fan calls from as far away as Florida, and sometimes Latshaw gets asked by “fan girls” to introduce the man who has spent 37 behind the microphone, waiting for his intro music.

“My husband is like, ‘You’re just a vehicle to get to Bob,’” Latshaw jokes.

At 100, Kruger brings a mind sharp enough to recall the date he volunteered for the U.S. Navy — Jan. 17, 1942 — and the dessert he and his first wife, Vivian, enjoyed on their first date: honeydew melon and ice cream.

“Back then I didn’t wear glasses,” he says, “but I picked out the prettiest one.”

He casually rattles off a novel’s worth of adventures in a few biographical sentences, telling the curious that he served aboard the USS Bogue in World War II, claiming 10 German submarines.

All without smoking a single cigarette.

He recalls meeting a survivor from one of the subs he helped sink at a reunion after the war, and discovering that his former foe had resettled in England and become a soccer star.

And he recalls taking a walk around Raleigh one day after he’d retired from a 40-year career as a meat cutter, and casually bumping into a professor friend from N.C. State University.

That friend suggested Kruger might enjoy sharing a few stories on the radio, having lived a few thousand of his own, and how important his words would be to people who couldn’t get them otherwise.

“I tell people it’s my calling,” Kruger says. “I laughingly tell them I’ve got seniority.”

He clips every News & Observer story with a pair of scissors, starting with the odd pages, moving to the even. Sometimes he mixes up the jump pages, a mistake any aging copy editor would understand.

He can recall the N&O missing delivery to the Wake Forest Road townhouse where NC Reading Service has its studio, forcing him to run across the street and buy a copy at the Kroger.

He may stumble over an occasional memory. He may have lost two wives to cancer, but he married a third, Doris. He may have to coax himself onto his treadmill, but he usually musters the will power.

“Each day is a gift,” he says. “I get up every morning promising myself I’m going to do something positive. Unfortunately, some days it doesn’t happen.”

He makes a fitting spokesman for the world outside, delivering its news in a relaxed voice, turning the page past the bad stuff in hope of a nice surprise.

For the sentimental, North Carolina Reading Service provides a “Barix Box” the size of a toaster, which looks a bit like a transistor radio and streams its broadcasts 24 hours a day.

But more up-to-date listeners can also holler “Tune in to NC Reading Service” at their Alexa or stream it live from the website. Volunteers dictate The New Yorker, Discover, Smithsonian, Vanity Fair and Essence, but Kruger and Latshaw spend two hours with the N&O.