After 64 years spent flying, including in Korean and Vietnam wars, Virginia veteran’s head is still in the clouds 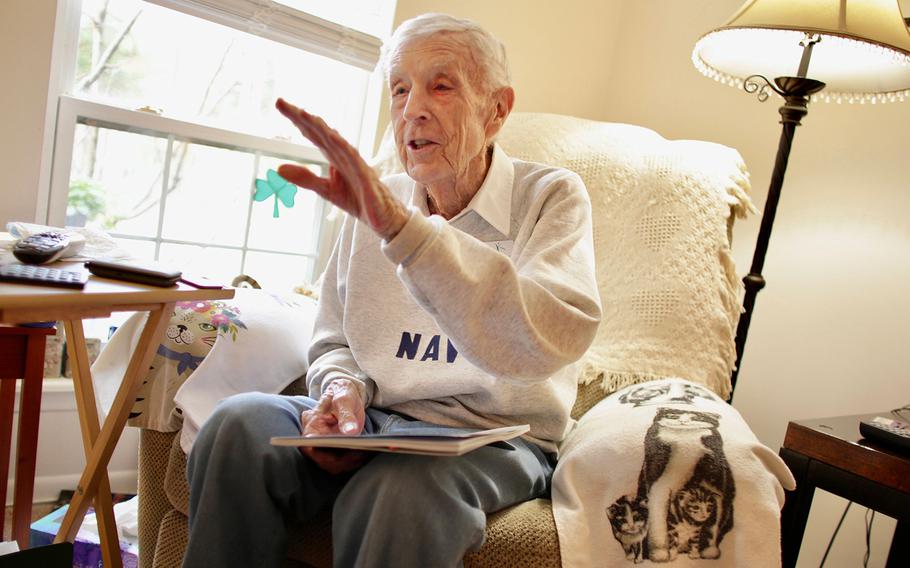 Retired Cmdr. Charles “Obie” O’Brien, 94, is a veteran pilot from the Korean and Vietnam Wars. O’Brien logged 1,100 hours of flight time piloting a Corsair and 70 hours of combat. (Stephen Katz, The Virginian-Pilot/TNS)

At 94, O’Brien’s face is lined with experience, but his eyes still sparkled as he recalled some 64 years flying above the clouds.

“I will tell you I would do it all again in a heartbeat,” O’Brien said as a smile tugged at the corner of his mouth.

O’Brien has become known in Hampton Roads military and veteran communities as “the Corsairs guy” — in reference to the plane he flew during the Korean and Vietnam wars. Over his 30-year Navy career, he amassed over 1,100 hours of flight time, including 70 hours of combat.

O’Brien’s sky-bound military career began in 1946. But his dreams of becoming a pilot were ignited years earlier.

“My mom said when I was coming home from the hospital where I was born, an airplane flew over and I poked my head up to look,” O’Brien said with a laugh.

O’Brien took his first plane ride in a Ford Tri-Motor in 1937 in Ocean City, N.J. The 15-minute plane ride cost $2.50. Then just 9, O’Brien came up short and talked the pilot into taking $1.75 he saved as a paper boy — managing to secure a seat in the co-pilot’s chair in the process.

The 15-minute flight was all the direction he needed. O’Brien joined the Navy on July 18, 1946. World War II had ended two years before that.

“So I was out of luck as far as wars go,” O’Brien said with a sly grin. “But I was going to be a pilot whether there was a war going on or not.”

O’Brien saw combat for the first time on June 13, 1953, toward the end of the Korean War. He was attached to an air wing aboard the USS Lake Champlain.

The mission was to strike a river railway target guarded by anti-aircraft artillery gunners. O’Brien recalled he was a 25-year-old hot-to-trot invincible bachelor, ready to go out and break something.

“Although I was concentrating on my bomb site, I was well aware of the ground fire coming up at me. It looked like a line of pink baseballs and I could hear and feel the ‘whoop’ as each round passed by my aircraft,” O’Brien said.

On his first pass, he dropped a 1,000-pound bomb from 2,000 feet before climbing back to altitude. He made two more passes, and each time the firepower against him intensified. But after nearly four hours, he safely returned to the carrier.

“When you come back, you feel good. You are full of adrenaline. But the adrenaline wears off and you realize you have 37-millimeter holes in your plane from being shot at by people with evil intent,” O’Brien said. A photograph from 2012 of Charles “Obie” O’Brien flying the very same plane — a Corsair F4U — he flew combat missions in during the Korean War. (Stephen Katz, The Virginian-Pilot/TNS)

While he was not shot down, O’Brien said every combat mission was “a close call.”

“You can’t get shot at without it being a close call,” O’Brien said.

O’Brien’s flights were not all behind enemy lines. In 1959, he flew a F-8 Crusader into the eye of Hurricane Gracie, a category 4 storm, to take photographs for U.S Navy Hurricane Hunters as part of storm research. He and another pilot flew to 45,000 feet above the eye, then down into the center of the storm.

“It was like a sunny day inside the eye. But the crusader is a single-engine plane, and on the way out I was thinking, ‘If this engine craps out, I am in big trouble.’ I had a plan that I would eject, float down into the eye, open my little rubber raft and wait for the wall of the hurricane to hit,” O’Brien said. “Of course, nothing like that happened.”

A photograph O’Brien captured on that flight was published on the back cover of Life Magazine.

“The credits said, ‘U.S. Navy official photo’ — which was OK with me,” O’Brien said with a laugh.

In 1955, O’Brien married the love of his life, Barbara; the couple had three children.

“She sat through two deployments before we got married. I wanted her to know I was going to be a Navy pilot and what it entailed — time away from home,” O’Brien said. “If anybody deserves any medals, it is the Navy wife for holding the family together during deployments.”

O’Brien’s military career spanned 30 years but he continued to fly long after he retired from the Navy. He joined Skytypers, an aerobatic team that performed at airshows around the United States using World War II-era planes, and later volunteered to fly for the Military Aviation Museum in Virginia Beach.

O’Brien’s last flight was in April 2014 — 64 years after the first flight of his professional career. He was 86.

“And then I came home and sulked,” O’Brien sighed.

O’Brien’s Virginia Beach apartment is decorated with model airplanes he flew and photographs from his time in the service. His olive green flight jacket still hangs off the back of a chair.

While his feet have been planted firmly on the ground for the past eight years, O’Brien’s head is still in the clouds.

“I felt like I was complete when I was flying. I had peace, tranquility — all my problems on the ground stayed on the ground. If I could say it in one word, it would be ‘fulfillment,’ ” O’Brien said.