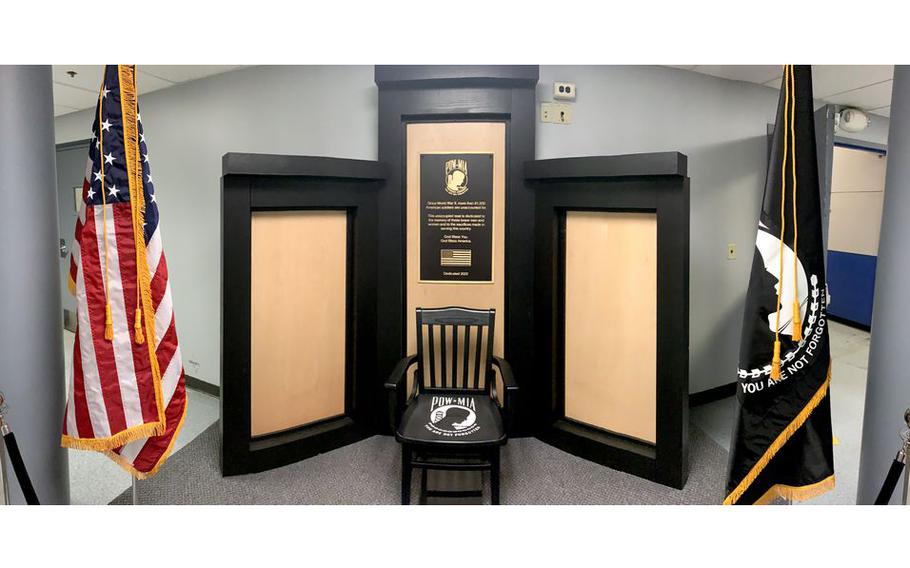 The U.S. Postal Service’s Springfield Processing Facility unveiled and dedicated a new Veterans Memorial in their building during a ceremony on Thursday, Nov. 10, 2022. (Don Treeger, The Republican/TNS)

Although neither employee was available for an interview, Syerk said in a statement it was an honorable task that he and Hershowitz worked on, since they are veterans themselves.

“Steven and I have both served in the United States Army, but neither of us were prisoners of war or missing in action, so we took input from many individuals to create something respectful and yet, powerful,” Syrek said. “Steven and I hope we have accomplished both.”

The memorial showcases an empty chair with the image form the POW/MIA flag on its seat. Above the chair rests a plaque that says the empty seat is dedicated to the memory of the missing soldiers. 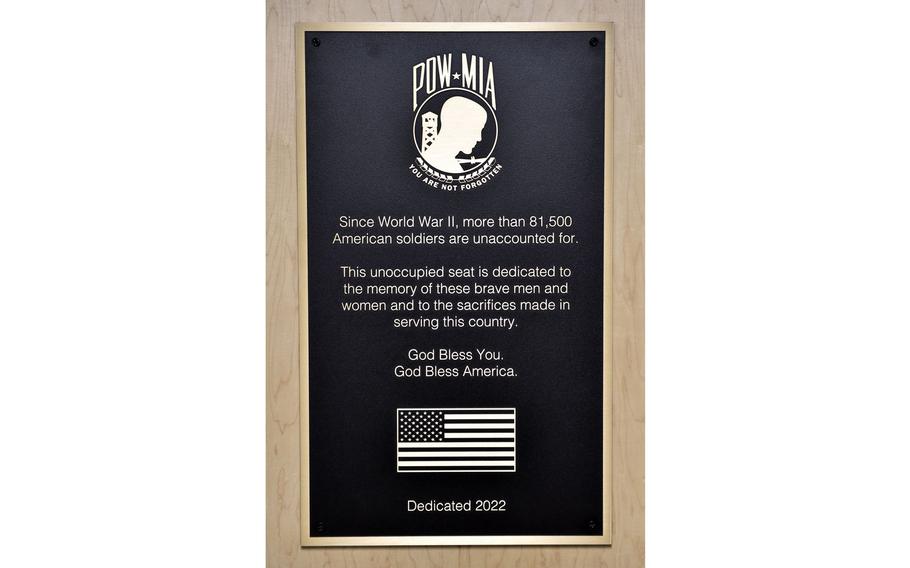 The U.S. Postal Service’s Springfield Processing Facility unveiled and dedicated a new Veterans Memorial in their building during a ceremony on Thursday, Nov. 10, 2022. This plaque hangs above a forever empty chair. (Don Treeger, The Republican/TNS)

About 120 veterans are employed at the Springfield processing facility, a number Donoghue hopes to increase in the following years.

Veterans, Donoghue said, “usually come with talents and skills that can immediately be leveraged in this type of work environment.”

To celebrate the unveiling of the memorial, a ceremony was held in the Postal Service’s processing facility, where Chief Master Sgt. Rosiline R. Ratliff, of the 439th Airlift Wing at Westover Air Reserve Base, offered a few remarks.

In her speech, Ratliff said the United States military recognized the need for postal services as a morale-enhancing tactical asset.

“Postal services are recognized as a crucial planning effort and is a key sustaining factor within the U.S. military’s operations,” Ratliff said. “Nothing replaces the feeling when you get when you receive a letter, or care package from home. What you do on a daily basis here, makes it different for many military families, so thank you.”

She concluded her speech by saying the United States of America continues to draw strength from those who will serve to protect the land of the free and the home of the brave.

Following Donoghue’s speech, there was a moment of silence, followed by the playing of taps, which concluded the ceremony.