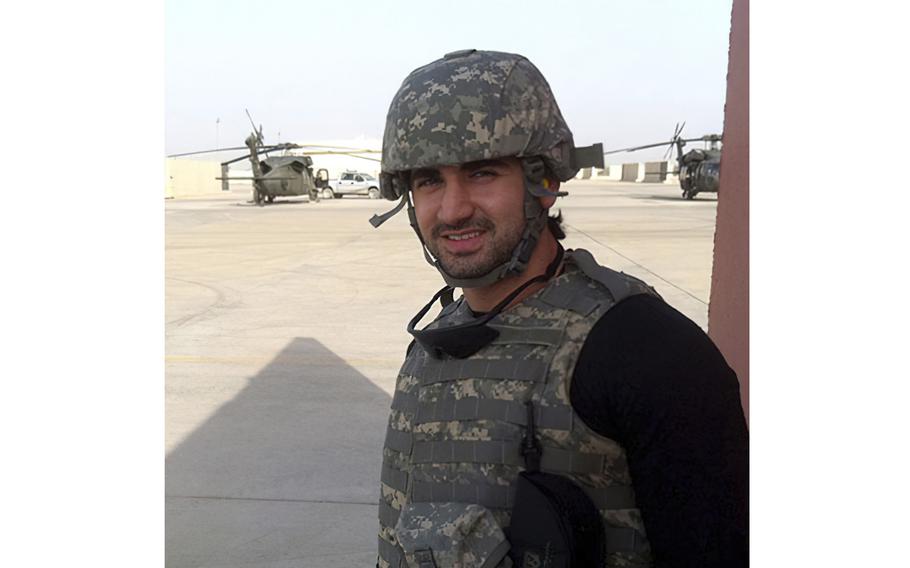 This image provided by Amir Hekmati shows Hekmati when he was in the U.S. Marine Corps in Baghdad, Iraq, in May 2010. (Amir Hekmati)

WASHINGTON (Tribune News Service) — A federal appeals court has ruled against Michigan’s Amir Hekmati, who fought the revocation of a $20 million payout he was promised by a government fund for victims of state-sponsored terrorism.

A three-judge panel for the U.S. Court of Appeals for the Federal Circuit late last week affirmed a lower court decision to dismiss Hekmati’s lawsuit seeking damages for the fund’s breach of its payment obligations, saying the court lacks jurisdiction to review decisions by the fund’s special master.

Hekmati, a U.S. Marine veteran from Flint, had applied for compensation from the federal fund after he was imprisoned in Iran for 4½ years and released in 2016 as a part of the Iran nuclear deal.

The compensation claim by Hekmati, a U.S. citizen, was initially approved by the fund’s special master, Kenneth Feinberg, in December 2018. But years later, Feinberg revoked his decision and said Hekmati wasn’t eligible for the money after learning of FBI allegations that Hekmati had traveled to Iran not to visit his ailing grandmother as he had claimed but to sell classified information to the Iranian government.

Hekmati has vehemently denied the allegations and accused the FBI of having “abused its authority.” He has not been charged with any crime, and his lawyers stressed in court filings that he was tortured and sentenced to death by the very government that he’s alleged to have tried to sell information to.

Hekmati filed a lawsuit against the government seeking damages for the fund’s breach of its payment obligations. But first the U.S. Court of Federal Claims and now the Court of Appeals for the Federal Circuit found that the statute at issue precluded judicial review of the special master’s decision and dismissed Hekmati’s claim.

“We do not have the evidence that led Mr. Feinberg to conclude that Mr. Hekmati attempted to sell classified national security information to the Iranian government. Nor do we attempt to discern whether Mr. Feinberg correctlyreached that determination,” wrote the panel of judges.

“All we conclude is that the Court of Federal Claims cannot review the special master’s decision because Congress did not give it jurisdiction to do so.”

Hekmati attorney Scott Gilbert said he and his client were disappointed in the decision by the Federal Circuit, noting it was “purely procedural.” He left open Monday the possibility of an appeal.

“We are reviewing all of our options. We are committed to overturning the disgraceful and illegal actions of the Department of Justice, denying to Amir Hekmati, a decorated Marine and former prisoner of the Iranian regime, the compensation that he is due under federal law,” Gilbert said.

“This is our DOJ at its worst, targeting and persecuting a victim with no factual or legal basis. DOJ, in my view, is right up there with the Revolutionary Guard, except that DOJ does it from behind their desks.”

Hekmati attorney Emily Grim had argued his claim was not precluded because it was not challenging the compensation decision itself but instead was a “programmatic challenge” seeking to enforce the agreement to pay out the money.

Grim told the appellate panel that the government’s reconsideration of Hekmati’s award violated the fund’s authorizing statute, noting that it says a special master’s decisions are “final and nonreviewable.” She also said the reconsideration was untimely, coming years after the initial award and at least 11 months after the fund had information from the U.S. Department of Justice that Feinberg later cited as the basis for his reconsideration.

The attorney representing the government, Shari Rose, told the panel at arguments that Hekmati’s case presented both the special master and the Department of Justice with “uncharted waters” after they learned there may have been an eligibility determination that was “based on fraud.”

The information at issue was classified, so the Department of Justice had to create a declassified record to provide to Feinberg and Hekmati, Rose said in explaining the delay.

The appellate panel in its opinion noted that the statute at issue shows that Congress intended to bar judicial review of all decisions made by the special master with regard to compensation from the U.S. Victims of State Sponsored Terrorism Fund, and that Feinberg’s reconsideration decision constituted such a decision.

The judges rejected Hekmati’s argument that the reconsideration itself was procedurally invalid and didn’t take place within a reasonable period of time. They noted these were “unique” circumstances where Feinberg was considering new evidence involving allegations of fraud that had to be declassified, concluding his decision was issued within a “reasonable” time.

“Thus, the reconsideration decision was a valid exercise of the Fund’s inherent authority to reconsider its decisions,” the panel wrote.

Feinberg revoked Hekmati’s award from the fund two years ago in January 2020, saying the new information he’d reviewed supported his conclusion that the “primary purpose” of Hekmati’s trip to Iran was to sell classified U.S. national security information to Iran.

Feinberg cited partially redacted summaries of FBI interviews with Hekmati and an unsigned document claiming that Hekmati had accessed classified materials about Iran in his role as an intelligence analyst for a U.S. contractor in Afghanistan.

The same document said Hekmati had left his contractor job after a month or two, and alleged that four independent, unnamed sources claimed he’d approached Iranian officials offering to sell them classified information, according to court records.

Feinberg concluded that Hekmati had made misrepresentations in connection to his application to the fund and, therefore, was not eligible for payment. The special master later held a review hearing to hear testimony from Hekmati in April 2020 in support of his challenge, but issued a final decision in December 2020 affirming his revocation.

Hekmati’s lawyers argued in court records that the reconsideration was “unlawful” and not supported by the facts, highlighting that they presented Feinberg with 379 pages of evidence and hours of sworn testimony by Hekmati to contradict the Department of Justice’s allegations.

That evidence included email correspondence by Hekmati with his mother and others showing he had plans to visit his family in Iran long before he learned of the new job opportunity in Afghanistan.

Hekmati and his attorneys have also stressed that all Iran-related materials he reviewed in his position were within the scope of his job responsibilities and security credentials and done so openly, with no concerns expressed by his supervisors.

Hekmati’s lawyers noted he had already left his job when he traveled to Iran and wasn’t obligated to inform former colleagues of his trip. The son of Iranian immigrants, he stayed with family members there and never approached Iranian officials or tried to sell government secrets, Hekmati has said.

Hekmati was arrested during his 2011 trip to Iran and sentenced to death after the Iranians accused him of spying for the Central Intelligence Agency. Iran’s Supreme Court annulled the sentence but then convicted him of “cooperating with hostile governments” and sentenced him to 10 years in prison.

While detained, Hekmati received broad support from human rights groups and U.S. officials including then-Secretary of State John Kerry and then-Vice President Joe Biden, who met with Hekmati’s family in 2015 while during a visit to Michigan.

U.S. officials repeatedly denied that Hekmati was a spy, and President Barack Obama demanded his release. Hekmati was freed in 2016 with other U.S. citizens, including the Washington Post’s Jason Rezaian.