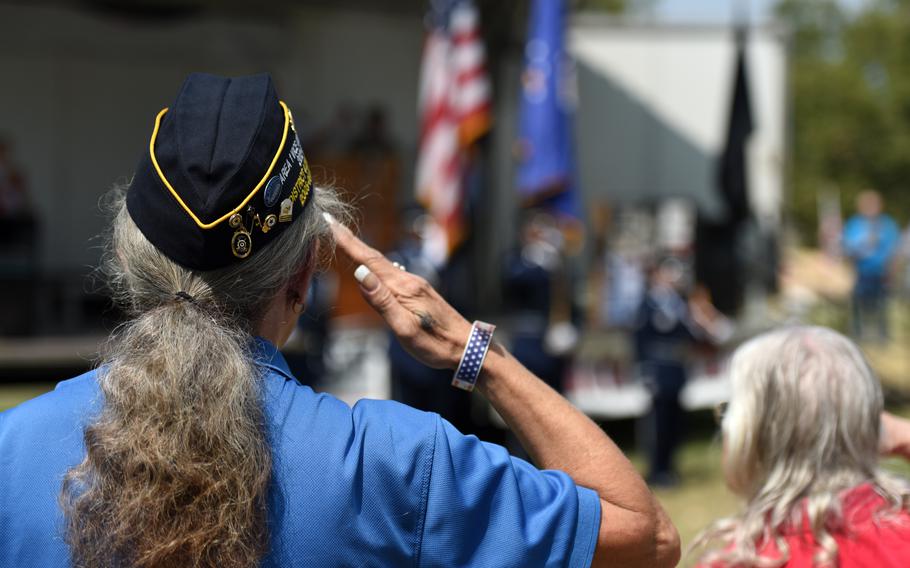 Cynthia Verrill, Linda American Legion Post 807 commander, salutes the flag during the playing of the National Anthem during the Yuba-Sutter Stand Down in 2018, in Marysville, Calif. The stand down gave local veterans and their families the opportunity to seek services, such as dental, veteran benefits and Social Security, at one location. (Ramon A. Adelan/U.S. Air Force)

The announcement comes two days after President Joe Biden signed the Veterans’ Compensation Cost-of-Living Adjustment Act of 2022, which will require the Department of Veterans Affairs to boost compensation for veterans with disabilities and their families by providing a cost-of-living adjustment equal to the Social Security increase.

The cost-of living adjustment — the largest in more than 40 years — means the average recipient will receive more than $140 extra a month beginning in January, the Social Security Administration said Thursday.

If a veteran with no dependents has a disability rating of 60%, that person’s monthly compensation from the VA is about $1,214 and could increase by about $105.

Joe Parsetich, the national commander for Disabled American Veterans, said the organization is delighted at the cost-of-living increase for veterans disability compensation. He said many veterans with disabilities rely on that money.

“This increase…comes at a time when many veterans across the nation are battling higher retail costs associated with everyday living,” he said in a prepared statement. “This welcomed increase will help ease the financial burden many veterans and their families are facing.”

About 70 million people — including retirees, disabled people and children — receive Social Security benefits. This will be the biggest increase in benefits that baby boomers, those born between the years 1946 and 1964, have ever seen. The last time a COLA was higher was in 1981, at 11.2%.

This is also the largest VA increase in compensation for veterans in 40 years. Last year, the increase went up by 5.9%.

AMVETS, another veterans group, said veterans with disabilities depend on the payouts as inflation costs have risen.

“While it's unclear how much of a financial burden this will lift from veterans and caregivers, every bit helps,” AMVETS said in a prepared statement. “Our next step as advocates is pushing for veterans to begin seeing that increase in their payouts hopefully as soon as December.”