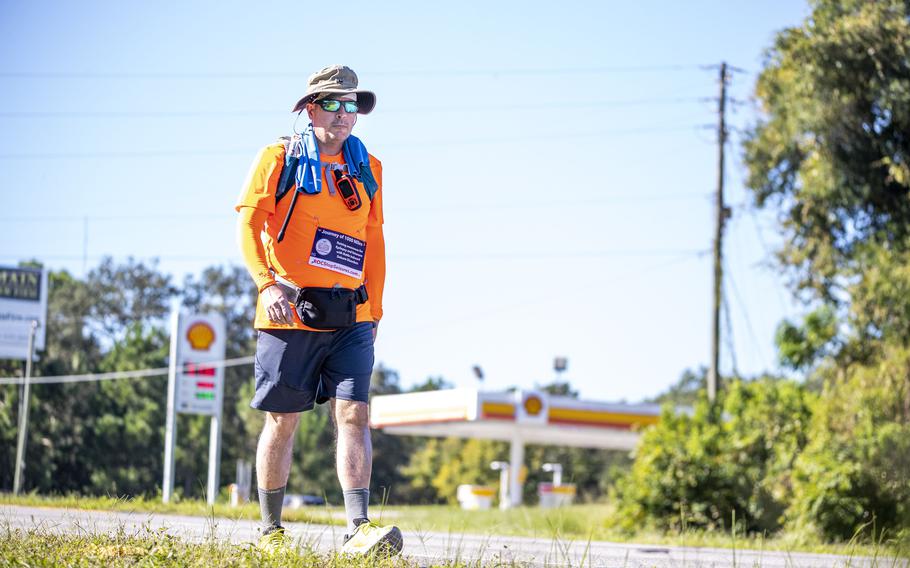 (Tribune News Service) — From his career in the Army to a life-changing medical diagnosis in his 30s, Ryan O’Connor doesn’t view life’s obstacles as roadblocks but rather as challenges he can overcome.

O’Connor, whose nickname is “ROC,” spent time as a cook in the Army, helping to serve in the name of freedom before having his own taken away by seizures that started at the age of 36. More than a decade later, O’Connor’s epilepsy is an ongoing battle and a force to be reckoned with.

“You might not see my medical condition on a daily basis, but it is there and it’s a hidden monster I have to deal with,” he said. “There are 3-4 million Americans at this point that are walking around with active epilepsy. I don’t want people living in the shadows anymore.”

Though some might consider such a diagnosis as a stroke of bad luck, epilepsy has been a well of strength for O’Connor to draw from — especially as he walks 1,000 miles from Florida to Missouri to help others who struggle with seizures.

The Army veteran set off from Longwood, Fla., on Oct. 1, walking 22 miles and reaching Mount Dora by nightfall. Ultimately, he hopes to achieve distances of 30-40 miles per day, walking as many as 100,000 steps to reach his destination — the headquarters of 1st Phorm, one of ROC’s favorite supplement companies.

Marissa O’Connor, Ryan’s wife, is following his footsteps while driving a rented RV, which will help provide rest stops and a place to sleep on the way. In addition, she’s helping to promote ROC Stop Seizures, the 501(c)(3) the couple established in the name of epilepsy awareness and research. Ryan “ROC” O’Connor stands with his wife, Marissa O’Connor, before embarking on day two of his Journey of 1,000 Miles in Mount Dora, Fla., on Oct. 2, 2022. (Patrick Connolly, Orlando Sentinel/TNS)

O’Connor isn’t able to drive but has managed to get his seizures mostly under control with the combination of a ketogenic diet, a brain implant from AdventHealth and a small dose of medication. Still, he recognizes how many other epilepsy patients, especially adults, need help and further research to improve their lives.

“There’s so much information out there about childhood epilepsy, but there’s not enough information about adult and adult-onset epilepsy,” O’Connor said. “The biggest goal would be to find a cure for epilepsy and find a way to stop seizures permanently for people.”

While his “Journey of 1,000 Miles” won’t be easy, O’Connor finds motivation to keep going when thinking of the millions of people who could benefit from additional funding and awareness of epilepsy.

“There are well over 100,000, if not 200,000-plus American veterans that have battle-induced seizures from PTSD or explosions and so forth,” he said. “ROC Stop Seizures is a driving force to never quit and never stop until we come up with answers. Even then, we’re going to keep going until we get help to every single person out there.”