New monument honors service of Black Americans in 12 US wars 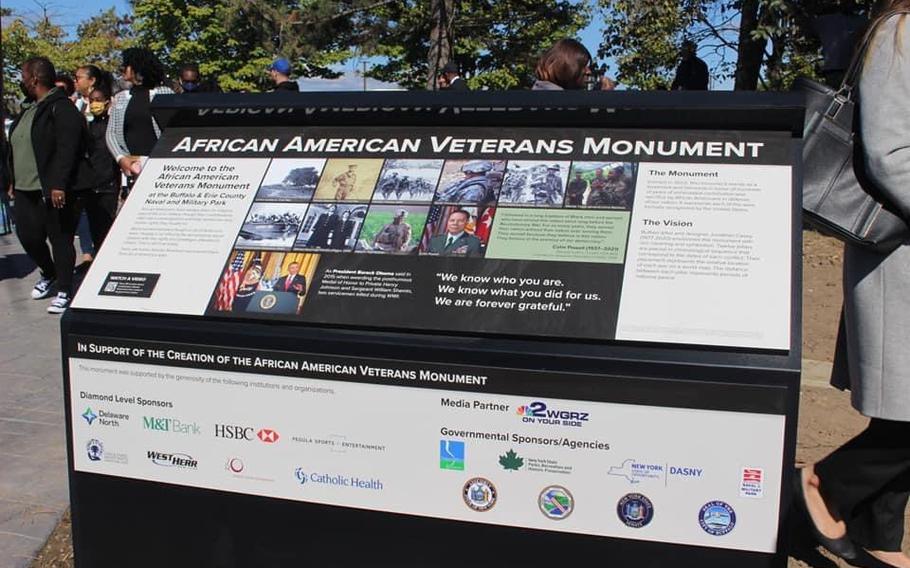 Ronal Bassham wishes he could look back fondly on his 22-year Air Force career as a ground crewman.

“I’m proud of my service, but I am not proud of the way I was treated,” said Bassham, a Black Korean War veteran from Niagara, N.Y., who also served in Vietnam and received a Bronze Star medal.

He said he is grateful there is now a place where he and other Black military veterans and their families can go to celebrate their contributions and pay tribute to those who never made it home.

On Sept. 24, Bassham attended the unveiling of the African American Veterans Monument in Buffalo at the Buffalo and Erie County Naval & Military Park. The $1.8 million project was built with a combination of state funds, charitable contributions and business donations.

For Bassham, it was a moment he wondered if he’d ever see.

“I did everything [the Air Force] asked me to do, but I was not treated equally,” he said. “It’s long overdue that people know the truth about what Black people experienced in the U.S. military.” 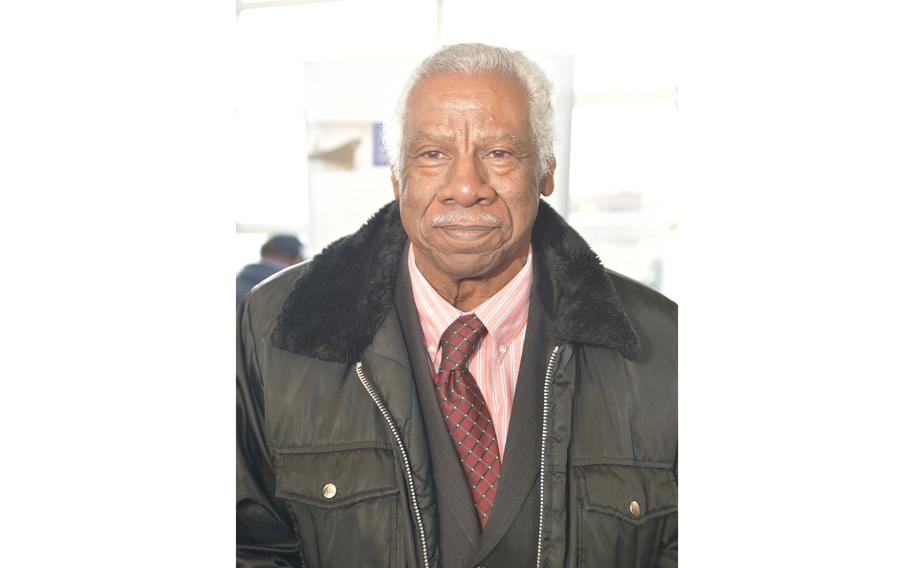 Ronal Bassham at the groundbreaking for the Buffalo monument in 2018. He was in the Air Force for 22 years. (Khari Myers of Khari Imagery) 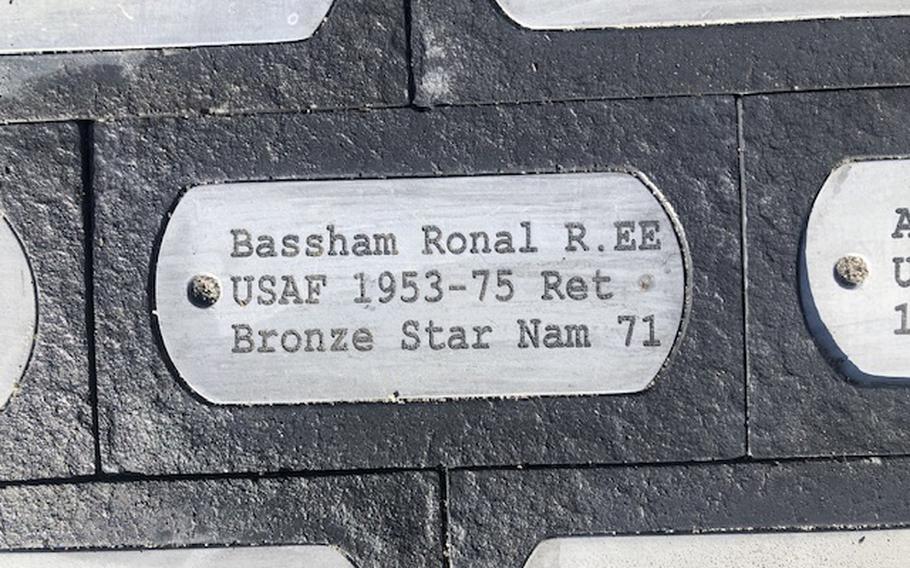 Bassham, 88, said he remembers segregated barracks, racist comments and losing out on promotions to white crewmen when he was in the Air Force.

“This monument is a pebble compared to the mountain of anger I have felt over the years,” he said. “But this will be a site for healing.”

The Buffalo monument is believed to be the first of its kind in the country, honoring the contributions of Black service members in 12 U.S. wars, from the Revolutionary War to the war in Afghanistan.

There are other memorials and museums that honor Black soldiers, though the Buffalo monument is the only one dedicated to living and deceased veterans from all branches of the U.S. military, said Robin E. Hodges, 60, a U.S. Navy veteran and vice-chairwoman of the monument’s board of directors.

Visitors to the new monument stroll paths paved in bricks engraved with the names of current and former service members as they view 12 black cylinders resembling giant candles.

The 10-foot pillars are positioned according to the longitude and latitude coordinates of where each war took place, and the spaces in between represent peace time, Hodges said. 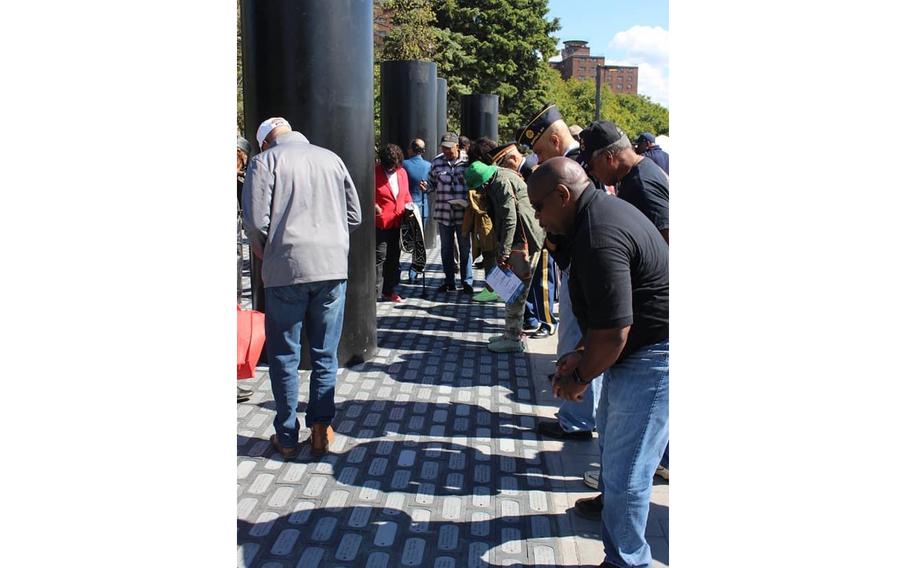 On opening day, visitors searched for loved ones' names inscribed in the brick paths at the African American Veterans Monument. (Courtesy of Lauren McGuire)

The lights on top of the pillars replicate the candles that burned in families’ windows during the Civil War to guide soldiers home, she said.

Hodges said the monument also has interactive exhibits that tell the stories of Black veterans and provide context about racial disparity and discrimination they experienced over the centuries.

From the segregation of troops during the Civil War to the denial of benefits after World War II and discrimination that followed the desegregation of the Armed Forces in 1948, no part of the military’s treatment of Black servicemen and women should be left untold, said Warren Galloway, a Vietnam War veteran and the monument board’s chairman.

“For the most part, these stories aren’t in the history books, so a lot of people don’t know the history of African American service,” he said. “We’re hoping people will take away the same kind of emotion and intense closeness they feel after visiting the Vietnam Veterans Memorial.”

For $250, anyone can purchase a brick for a current or former Black U.S. military member, he said, noting that about 600 bricks have been sold and installed so far, with another 6,000 available.

The monument also gives Buffalo residents a place to gather and honor Black service members in the aftermath of a racially motivated shooting that killed 10 people at a grocery store in May, Galloway added.

“From what I’m hearing, the project has brought a resilience to the African American community,” he said. “This is something to be proud of.” 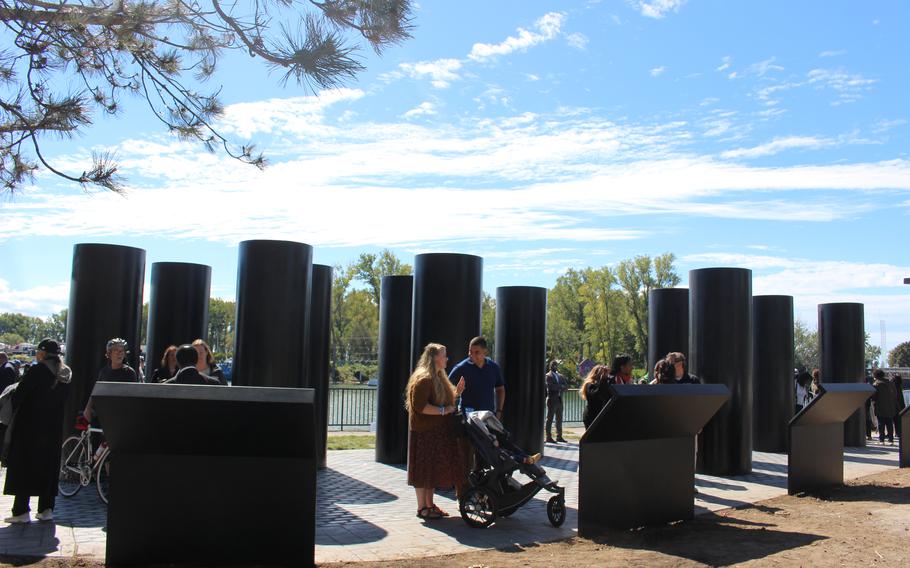 Twelve pillars at the new African American Veterans Monument in Buffalo present the 12 wars that Black Americans fought in. (Courtesy of Lauren McGuire)

The idea for the monument started six years ago after a small group of Buffalo area residents told New York Assembly Majority Leader Crystal Peoples-Stokes they hoped to locate some land to build a park to honor Black service members.

“She got the land donated from the city, started a committee and put me on it,” said Madeline O. Scott, 87, a Black amateur historian whose ancestors served in the Civil War.

Scott said she regularly scans obituaries for the names of deceased Black military veterans from western New York, and she was excited to finally have a way to honor them for their service and thank those still on active duty.

Peoples-Stokes said the project was personal for her as well, since her father and grandfather were enlisted. The story of Black people in the U.S. military has not been fully told, she said.

“I felt it was only right to honor our relatives and descendants’ contributions,” she said. “[They] fought for our nation’s rights and freedoms, while in many cases, they didn’t have their own.” 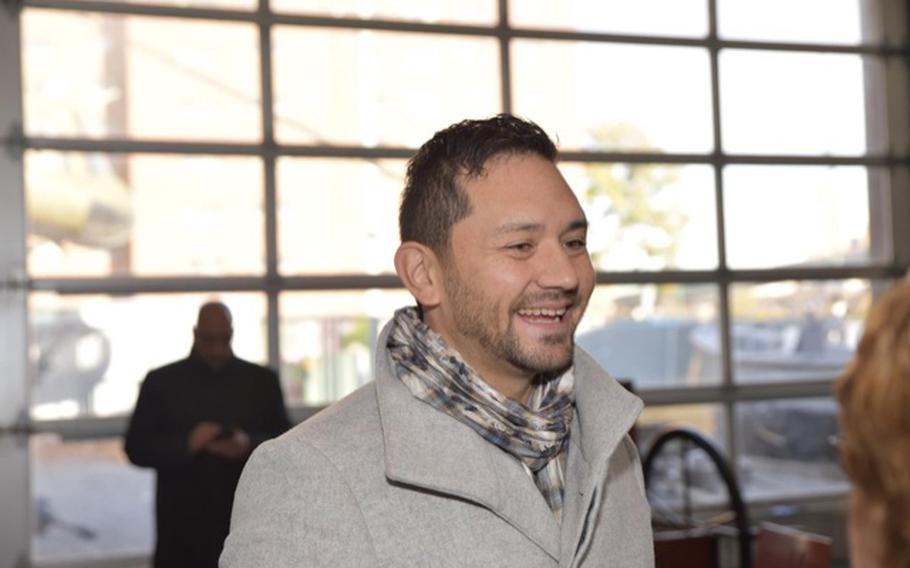 Monument designer Jonathan Casey attended the groundbreaking ceremony in November 2018. He died in an accident in 2020. (Khari Myers of Khari Imagery)

Peoples-Stokes and other board members selected Jonathan Casey, a local concrete artist, to design the monument. When Casey, 42, died in an accident in April 2020, a craftsman he’d enlisted to help with the project offered to finish it.

“I think he’d be happy to know it turned out exactly as he’d planned,” said Rocky Gray, a fabricator who runs Buffalo Stoneworks.

“Jonathan was proud of his work on the monument, and it was an emotional moment to see it unveiled,” said Casey’s father, Tom Casey, of West Seneca, N.Y.

Henry Curtis, a retired Army Reserves veteran from Buffalo, said he was impressed with Casey’s vision.

For Ronal Bassham, now a monument board member, seeing his own name and the names of four family members at the monument was a small step forward in recognizing the contributions of Black people during times of war and peace.

“It can’t change what happened,” Bassham said. “But I’m happy the truth that should have been told 100 years ago is now coming out.”