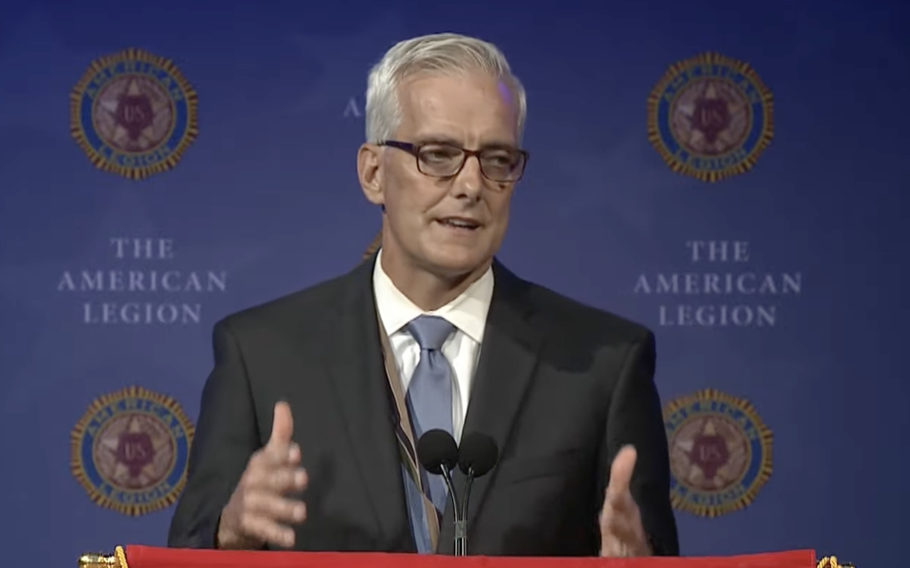 The head of the Department of Veterans Affairs testified on Oahu Wednesday about the state of health services in Hawaii and issues including staff shortages, women's care and complaints from community clinic providers about payments.

Hawaii is home to an estimated 100,000 veterans spread across Oahu and 30,000 veterans on the neighbor islands. All are served by the Oahu-based VA Pacific Islands Healthcare System, which is also responsible for providing care to all veterans across the U.S. Pacific island territories of American Samoa, Guam and the Commonwealth of the Northern Mariana Islands.

"Health care of all kinds is in short supply throughout the Pacific islands and Hawaii," McDonough said. "We've made hiring and retention one of our top priorities, to make sure that we're both attracting and keeping great medical professionals to serve Hawaiian vets."

He said that nationwide the department estimates it will need to hire 45,000 nurses over the next three years. "July was the first month of this calendar year that we hired more nurses than we lost through retirements or through leaving to go to other other health care systems," McDonough said.

He credited the newly passed Retention and Income Security Enhancement Act — or RAISE Act — for giving the VA more options on giving raises and bonuses. Currently the entire country is facing a shortage of nurses that has put a strain on hospitals and clinics.

"One thing we have to do better on, and this is squarely on me, we have to hire faster, onboard more quickly and get them providing care," McDonough said.

During the hearing Hirono noted statistics that show that Asian American and Pacific Islander veterans have the highest suicide rates of any demographic. The VA has invested $1.5 million in a study on the issue in Hawaii.

Pacific Islanders served in the wars in Iraq and Afghanistan in particularly high numbers. A study of 2003 recruiting data found that Pacific Islanders joined the Army at a rate 249% higher than that of other ethnic groups, and that American Samoa has consistently had among the highest enlistment rates of anywhere in the United States.

"Suicide prevention continues to be our number one clinical priority, " McDonough said. In 2020 roughly 6,000 veterans across the country died by suicide, but while McDonough said the number needs to be brought to zero, he noted that number showed a decrease of 220 from 2019, which itself was a decrease from 2018.

Outside of the Spark M. Matsunaga VA Medical Center on the grounds of Tripler Army Medical Center, it has few facilities of its own, relying on partnerships with community clinics. A new clinic on Oahu's Leeward side named after the late U.S. Sen. Daniel Akaka — who spent years unsuccessfully pushing to get it funded and built — is finally under construction but will not be ready for operations until at least late next year.

Overall, McDonough painted an optimistic picture of the VA's efforts on the national level to streamline its handling of claims and referrals for patients, with 33 million completed community care appointments.

"Now, we're not where we need to be on the untimely scheduling of those referrals, (but) we're making steady progress in reducing wait times," he said.

In Hawaii, the reliance on community care clinics has led to strains.

Diane Haar, founder of Hawaii Disability Legal Services, testified that after providing treatment to veterans, many are receiving "overpayment" notices that they owe thousands of dollars back to the VA because they supposedly received more money than they were entitled to.

"Most of our medical providers here are pretty small one-doc shops who are doing their own billing," Haar said. "The VA is sending them these letters telling them if they don't pay the money back immediately, VA will take it out of what they owe them or what they're supposed to owe them in the future for any future veterans they take."

She said that more often than not they're successful if they appeal the letters, but the process is time consuming and particularly disruptive for small clinics.

"I've had doctors really reach out to me and let me know that they really are seriously considering not taking veterans anymore, they've got one foot out the door already, because they don't know how to handle this, " she said.

The president of TriWest Healthcare Alliance, contracted to handle claims in Hawaii and the Pacific islands, also testified.

David McIntyre said there have been "providers, in some cases, who need some rudimentary training to make sure that those claims that are submitted are done properly," but that he needed more information about repayment notices.

"I'm just mystified, Mr. Secretary, as to why this is happening and there's no explanation, and resulting in already a lack of private providers," Hirono said.

"Whenever I think VA, I always think they're going to tell me no, they're going to put as much roadblocks in front of me that I have to overcome in order for me to get treatment," testified Air Force veteran Roxanne Bruhn. "That seems to be the prevalent thought. When you talk to any veteran who has to journey through the VA system is that they're gonna give me a hard time and the answer is going to be no and I have to fight. And so I'm hoping that that will change."

Bruhn testified that when she sought therapy to deal with trauma related to a sexual assault during her military service she was unable to talk to a female therapist because there were none available. She currently sees a therapist outside the VA and said she hasn't been a patient with the VA since 2020.

"Why was there no female that could help a female veteran who suffered an assault while on active duty? You know, I didn't feel comfortable talking to another male about what happened to me," she said. "It was through that, those issues that I asked them to be referred out to community for care."

Many veterans across Hawaii and the Pacific have found it difficult to access facilities. The VA is in some cases able to reimburse them for travel costs between islands to reach facilities, but even then that can be a challenge for those in rural areas.

"This is really important because, honestly, some of our veterans are pretty poor," Haar said. "They'll be reimbursed by VA, but they can't afford it in the first place and these referrals make a huge difference."

VA officials have been pushing to increase telemedicine to reach veterans on far-flung islands to diagnose and recommend treatments for minor ailments and preventive care. But several participants in the hearing testified that many remote areas on neighbor islands have no cellphone service and limited internet. And many procedures and checkups still require in-person care.

"That's the real issue is that lack of practitioners, that lack of service, " George Barlett, adjutant general of the Veterans of Foreign Wars in Hawaii, told the Star-Advertiser after the hearing.

"The neighbor island people and the people from Guam and Samoa aren't coming to Hawaii to get care because the care is better here than anything else they're getting," Barlett said. "They're coming here because they don't have access to that care there."