The trip will constitute the 14th mission of the Mid-Michigan Honor Flight, a nearly annual event designed to provide aging veterans of foreign wars the opportunity to visit the national monuments dedicated to them. For many, it will be their first chance to see these monuments, said Bob Green, the event's organizer.

When the group touches down in Washington, D.C., at around 9 a.m., its first stop will be to the World War II Memorial. From there, the veterans and their guardians will see the Korean War Memorial, the Vietnam Wall, the Marine Corps Memorial, and the changing of the guard at Arlington National Cemetery.

A new stop this year will be the Military Women's Memorial, which also is located at Arlington. The final stop will be to the Air Force Memorial.

They're expected to arrive back at Cherry Capital Airport around 8:30 p.m., when they will likely be greeted by a crowd of community members waving banners and flags to welcome them home, Green said.

Among them will be Bill Morse, a 100-year-old World War II veteran, and his brother, Jim Morse, a Korean War veteran. The co-founder of the national Honor Flight Network, Earl Morse, who is unrelated to the two Northern Michigan veterans, also will join the group on its flight from Traverse City.

Earl began the Honor Flight in Springfield, Ohio, in 2005. At the time, he was a physician who treated many World War II veterans. He organized the event after discovering that many of them didn't have the resources to see the newly erected World War II Memorial on their own, Green said.

Green said during the last two years of the COVID-19 epidemic, when the trips had to be rescheduled, 25 of the area's Korean War veterans died before having the opportunity to go on an honor flight. That led the flight's organizers this year to place special emphasis on accommodating as many World War II and Korean War service members as possible.

The flight this year will make use of a larger model of airbus, capable of seating 190 passengers, and a total of 15 more veterans. The prior model, an A300, accommodated a maximum of 160 passengers.

One of the Korean War veterans who will be attending this year's flight is Wally Juall, who served in the Army for 12 months beginning in 1958 as a cannoneer.

"I had no idea what a cannon was, but the Army's famous for on-the-job training," he said.

Two years ago, Juall was scheduled to take part in an Honor Flight that had to be canceled due to the pandemic. He has been to D.C. one other time, while working as a high school counselor, but he said this trip will be special because it will be the first time he will get to see the Korean War Memorial.

Juall said, more than anything, he wants to honor all of the U.S. service members who fought in previous wars. He choked up when he spoke about what it will be like to spend the day with his fellow brothers- and sisters-in-arms.

While he didn't see active combat when he was stationed in Korea, he said he has spoken to many people who did, and came back with stories of harrowing experiences.

"My heart goes out to all the people who served, because a lot of them went through hell — a lot of them," he said.

Report for America corps member and data journalist William T. Perkins' reporting is made possible by a partnership between the Record-Eagle and Report for America, a journalism service project founded by the nonprofit Ground Truth Project. 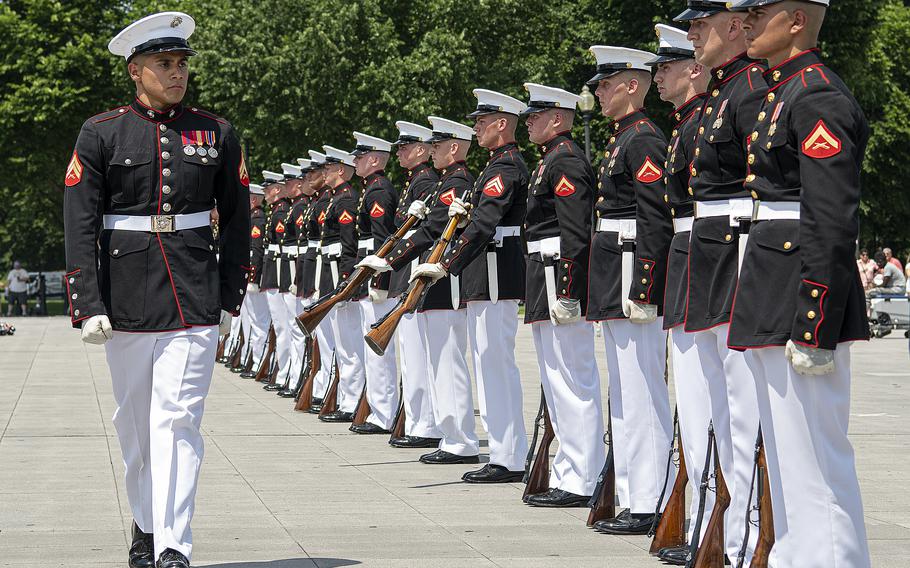 Members of a Marine Corps drill team perform outside the Lincoln Memorial on the National Mall in Washington, D.C., on Tuesday, May 31, 2022, before a crowd that included participants of a special all-female Honor Flight. (Carlos Bongioanni/Stars and Stripes)