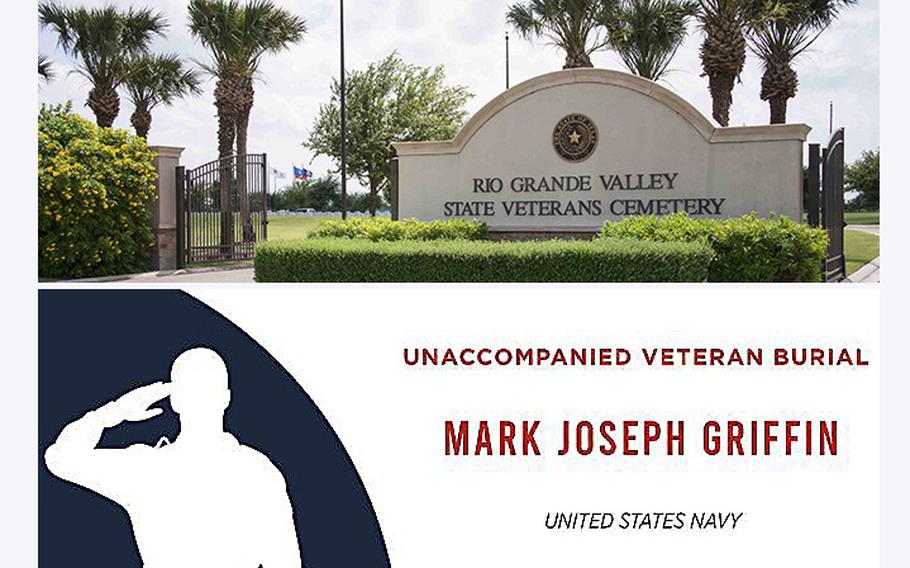 There are anywhere from four to 10 unaccompanied veteran burials a year held at the Rio Grande Valley State Veterans Cemetery in Mission, Texas. On Wednesday, Sept. 28, 2022, Navy veteran Mark Joseph Griffin would have had an unaccompanied burial at the cemetery, but veterans from multiple branches of the military gathered to say goodbye. (Rio Grande Valley State Veterans Cemetery/Facebook)

A burial ceremony was held for the unaccompanied veteran at the Rio Grande Valley State Veterans Cemetery where veterans from multiple branches of the military gathered to say goodbye to their brother in arms.

“As far as we’re concerned, whether he has family or not, he is a veteran and he deserves the respect that we can give him and for that reason, we are here in force,” said Tony Cordova, commander of the honor guard that performed the ceremony. “For us, it’s an honor and a privilege to be able to do this for the departed veteran.

Griffin, who was 67 when he died, was quartermaster seaman recruit and served from December 1973 to May 1975. He received the National Defense Service Medal.

Here at the Mission cemetery, there are anywhere from four to 10 unaccompanied veteran burials a year, according to George Rice, the on-site representative for the Texas Veterans Land Board which runs the cemetery.

“It’s difficult because the funeral homes usually don’t tell us so we have to screen for it and then we have to identify and realize, ‘oh my gosh, there’s not family coming out here,’” Rice said, “and most times, when that happens, we have like a two- or three-day time period to plan.”

Rice noted that these benefits that these veterans receive are earned through their service and, in some cases, with blood and sacrifice.

“Most of these men gave up the younger part of their lives for service, working 80-100-hour weeks,” he said, adding they get no time off and some of them serve for multiple combat tours.

“A lot of war and not getting paid very much for it either, just enough to live,” Rice said. “They deserve these burial benefits that they get and they deserve to be buried with honors like they’re supposed to.”

With no family members to accept a folded U.S. flag on behalf of Griffin, the honor fell to Assistant Mission Fire Chief Rene Alvarez, himself a veteran.

The support from other veterans is unlike anything else, according to U.S. Air Force Veteran Homer Gallegos, because they understand each other in a way that even family members do.

“We connect more with our own veterans than we do with our own brothers because with our brothers you can’t laugh or cry because they (say), ‘When are you going to get over it?’” Gallegos said. “And with us, we understand each other. That’s why I call them brothers.”

So with the strong showing of support from other veterans during Wednesday’s ceremony, Gallegos said Griffin wasn’t really alone.

“He’s not unaccompanied here today,” he said. “All his brothers were here from all the branches that were here representing them.”

Visit The Monitor at www.themonitor.com