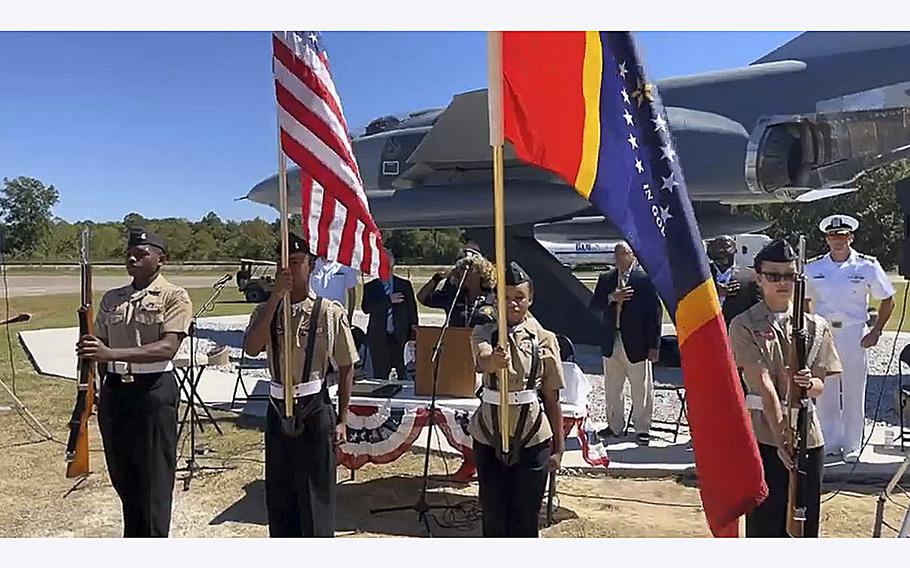 A video screen grab shows members of a JROTC honor guard presenting colors during a ceremony to dedicate a static display of an RF-4C Phantom II at a veterans park in Meridian, Mississippi. (East Mississippi Veterans Foundation/Facebook)

East Mississippi Veterans Foundation President Jeff Summerlin, who located the Phantom previously flown from Meridian’s Key Field and worked to have it returned from an airplane graveyard in Arizona, said the ceremony was the culmination of years of time and effort by a host of people, as well as more than $130,000 in donated material, equipment and funds.

“Having the static aircraft display as part of the East Mississippi Veterans Memorial Park would not have been possible without the help and dedication of many individuals and many businesses here in Meridian,” he said.

James Royal, who flew in the RF-4C Phantom when it was stationed at Key Field, drove up from Mobile, Alabama to attend the dedication. Royal said he saw the East Mississippi Veterans Memorial Park as filling a need in the community.

“I think this is good, a good idea for the community,” he said.

Tuesday’s dedication of the Phantom jet display, which fell on the 83rd anniversary of Meridian’s Air National Guard unit being created, was threefold, Summerlin said. First, he said, the aircraft was dedicated to all the men and women who served in the Meridian Air National Guard since its inception on Sept. 27, 1939.

Second, Summerlin said, the aircraft display was dedicated to the men and women of Meridian and all of East Mississippi who served their nation in one of the six branches of the military.

And finally, Summerlin said the RF-4C Phantom was dedicated in honor of four 186th Air National Guardsmen who died in a training accident during Phantom operations at Key Field. The four pilots’ names had been painted on the aircraft’s canopy rails, he said, and plaques bearing the four soldiers’ names and likeness will be installed around the aircraft display in coming weeks.

Ret. Brigadier General Maxey Phillips, who served with the four pilots, said there are many memorials, monuments and tributes to veterans throughout the nation, but few of them are dedicated to the service members who died during training.

Maj. James H. Wells and Capt. Gary A. Mullins were killed in an accident on March 26, 1980 and Maj. George Dugas and Capt. Raymond E. Bryson similarly died on Dec. 3, 1989. To those that served with them, the four men were more than pilots, Phillips said. They were friends.

“I, along with many of you out there, knew these four gentleman, these for airmen, these four patriots,” he said. “We knew them by name. We worked with them and we flew with them. Our crew chiefs out there strapped them in. We know their faces. We know them. They were our friends and we miss them, and part of this dedication today is to honor them and to remember them.”

Col. Cynthia Smith, commanding officer of the 186th Air Refueling Wing, said the aircraft, which sits just outside the Guard Unit, will serve as a reminder to present and future guardsmen about those that came before them and the sacrifices they made for their community and nation.

“This aircraft will serve as a reminder of our unit’s rich heritage of aerial reconnaissance,” she said. “Young guardsmen and friends in the community alike will see this plane and learn of earlier aircrews and aircraft flying over the beaches of Normandy, France, providing bomber escort over the Korean peninsula...support of the Berlin crisis and many other operations and conflicts around the world since.”

The static aircraft display, Smith said, represents her units history and the high standards set by the service members who came before.

“As my current members are tested by new adversaries and ever changing threat landscape, I hope they will be emboldened by the resiliency of those that came before them, those who overcame hardships and set the standard for excellence and service,” she said. “It’s our job to continue this legacy into future generations.”

In addition to the aircraft’s designation, Tuesday’s event also included a formal ribbon cutting for the East Mississippi Veterans Memorial Park as the display marked the completion of the first of four planned phases. Future plans for the park include a Wall of Remembrance, a Freedom Walkway and the Armed Forces Plaza.

Visit The Meridian Star at meridianstar.com