World War II vet, others represent a generation on Honor Flight from Indiana 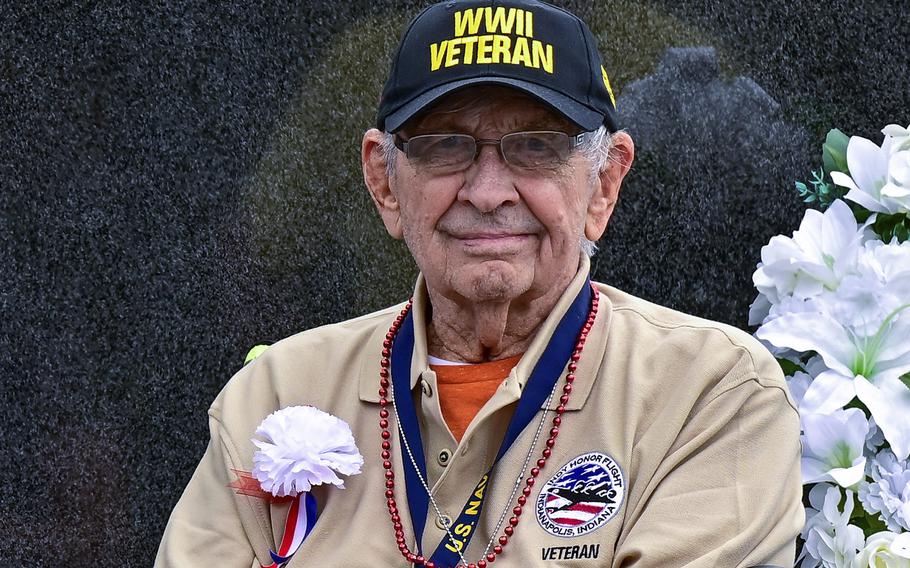 Several got choked up.

He drew attention at every stage of this month’s Indy Honor Flight 36 journey to transport military veterans to Washington, D.C., to see its national war memorials. Fox was one of 86 veterans who made the trip from Indianapolis to the nation’s capital on Sept. 10. Most served in Vietnam. Some served in Korea. A few served in World War II.

Fox served in the U.S. Navy in World War II and the Korean War, and served stateside as commander of Navy Reserve units in Terre Haute and Danville, Illinois.

All 86 of the participating veterans got rousing receptions at Plainfield High School for the Friday night send-off dinner and breakfast the next morning; their departure from Indianapolis International Airport; their arrival at Reagan National Airport in Washington; their tours of the Vietnam, Korea and World War II war memorials and Arlington National Cemetery; and their return stops.

They were showered with cheers, photo requests, handshakes, hugs and at least a few kisses. Police escorted their buses to and from the airports. Runway marshallers guided their planes with American flags instead of lights. Signs greeted their arrival.

“It’s all about the vet,” Gary Dickison, Fox’s guardian on the trip, said of the Honor Flight process. Each veteran flies with one guardian, someone other than their spouse — a no-cost trip for each veteran.

As a 98-year-old World War II vet, Fox got a big share of heartfelt thank-yous from younger generations.

“Charlie was like a rock star,” Dickison said Wednesday, reminiscing about the Honor Flight with Fox and Fox’s wife Maryella in the couple’s Terre Haute home.

Fox was the second-oldest veteran on Honor Flight 36, exceeded only by a 100-year-old vet from Indianapolis. They represent a core element of the “Greatest Generation” — Americans born in the 1920s. Sixteen million of them served in uniform in World War II. A total of 416,800 were killed in the war from 1941 to ‘45, the National World War II Museum says. Fewer than 200,000 who served are still living, according to U.S. Department of Veterans Affairs projections.

Fittingly, the reaction of people who met Fox and the other World War II veterans was powerful.

Maryella and other spouses couldn’t travel with the veterans to Washington. She’s known Charlie for 40 years, and their blended family include his son and daughter and their families, and her son and daughter and their families. Maryella and the other Honor Flight spouses did experience the festive send-off celebration at Plainfield High School, though. There, she saw kids and adults walk up to thank her husband and others. Some well-wishers were overcome. A few vets were, too.

“You couldn’t help but cry,” Maryella said, choking up at the memory. “It was emotional, very emotional.”

That happened in Washington, too. As the veterans toured the Lincoln Memorial — with its vast, rectangular Reflection Pool and the Washington Monument in the background — a British soldier approached Fox and asked if he’d pose for a photo with him. The soldier’s father served in World War II.

“He wanted to thank him,” Dickison said. A few minutes later, an Italian soldier also thanked Fox for his service.

Honor Flights began nationally in 2005, shortly after the opening of the World War II Memorial in Washington. That year, 126 World War II veterans were flown to D.C. to see it. Seventeen years later, Honor Flights bring veterans of World War II, Korea and Vietnam to Washington from 131 hubs in 45 states, including Indianapolis, according to the organization’s website. Most travelers are Vietnam vets now, Dickison explained.

Fox describes his World War II service humbly and matter-of-factly. It began in 1944, right after he graduated from Rose Polytechnic Institute (now Rose-Hulman) with a civil engineering degree. Many of his fellow members of Glenn High School’s Class of 1941 entered the service right after their graduation. A few went on to Rose. Fox’s studies got fast-tracked from the usual four-year plan, allowing him to graduate in 1944 after less than three years at the school.

That’s when he and three other brand-new Rose grads enlisted in the Navy. Fox was 20 years old then. After officer training at Hollywood, Florida, they were sent to various places. Fox served on a tank-landing ship — the Evansville-made USS LST-532 — in 1944 and ‘45.

“I spent my time on the East Coast out in the Atlantic and never saw a torpedo,” Fox said Wednesday. “In the Korean War, it was a different game. I got into a lot of skirmishes then.”

Fox paused his job at a mining company to serve in the Navy in the Korean War, which lasted from 1950 to ‘53. In that war, Fox served aboard a medium landing ship (known as a rocket) — the USS LSM(R)-535 — in the northern and western Pacific region and Asia. He returned home and continued his career, which spanned 40 years until his retirement in 1987 from AMAX coal as its chief surveyor. During that time, Fox still served as commander of Navy Reserve units in Terre Haute and Danville.

His longevity and record of service, including through World War II, impressed people involved and watching the Honor Flight to Washington this month. Two women in 1940s-era dresses and lipstick stood on each side of the vets and kissed them. “So they all had big lipstick marks on their cheeks,” Maryella said chuckling.

Fox said that moment blurred in with many others on the trek. “There was lots of people there,” he said. “Things were happening fast.”

The veterans also got a “mail call” on the flight home, similar to those deliveries in war time, getting called out by last names, one by one. Many of the Honor Flight letters were written by school children and volunteers. Fox received a bundle of 90 cards and letters. “So that was a neat experience for them,” said Dickison, who met Charlie and Maryella at gatherings of Terre Haute’s Ernie Pyle Chapter of the Military Officers Association of America.

Fox smiled as Dickison and Maryella recalled the Honor Flight events. “Well, it was another experience,” Fox said, sitting in a chair in his living room Wednesday as they sifted through photos of the trip. “It was a good deal. You get to go places and see things.”

He’s seen a lot since growing up near Seelyville with his father, a dentist, mother and sister. It was a time when Fox would walk, bicycle, hitchhike or ride his horse to Rose Poly. Holding a slide rule tended to entice motorists to give him a ride. He liked riding his horse, but Rose classmates often rode the animal when Fox left it tied up during class. “So he was worn out by the end of the day,” he recalled, laughing.

On Wednesday, Fox glanced at a larger-than-life photograph of himself in formal Navy uniform during the Korean War, provided as a gift for the Honor Flight.

“I ended up with white hair. I didn’t always have white hair,” he said, grinning widely. “It was brown.”

On the Honor Flight, lots of younger people showed appreciation to that white-haired fellow for what he and his generation did back when his hair was brown.

Visit The Tribune-Star at tribstar.com