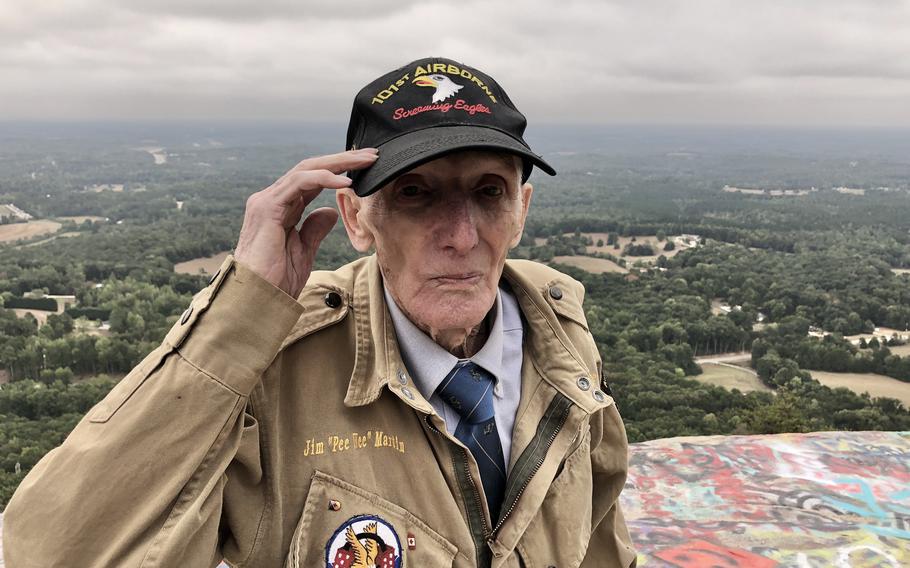 DAYTON, Ohio (Tribune News Service) — James “Pee Wee” Martin — a veteran of World War II who parachuted into Normandy on D-Day as a member of the 101st Airborne Division — was buried Wednesday in Dayton National Cemetery

The escort to Dayton National Cemetery began at 9 a.m. at the Sugarcreek Administration building.

Martin, a Sugarcreek Twp. resident, parachuted into Normandy near Saint-Come-du-Mont behind Utah Beach at 12:30 a.m. on D-Day.

Martin later fought in the Battle of the Bulge, and he received a Bronze Star, Purple Heart and European African Middle Eastern Service Medal for his service. Martin earned the nickname “Pee Wee” by being the lightest paratrooper in his regiment.

As a member of the 101st Airborne Division, known as the “Screaming Eagles,” he parachuted into Normandy on June 5, 1944, one of the first American forces to land.

Four months later, he and his unit were part of the British-led Operation Market Garden in the Netherlands and Germany, and was part of the 101st-led defense of Bastogne, Belgium, stopping the German army’s last-ditch attempt to split Allied forces in the Battle of the Bulge.

He also saw action in Germany, helping to liberate a concentration camp and helping to seize Adolph Hitler’s Bavarian home, known as the Berghof, in April 1945.

When Martin came home at the end his tour of duty, his goal was to settle down and live a quiet life, he told this newspaper in a 2014 interview.

“I’ve been there and I’ve done that,” Martin said. “All I cared about was getting a job to take care of my family and building a house on 50 acres and forgetting the world.”